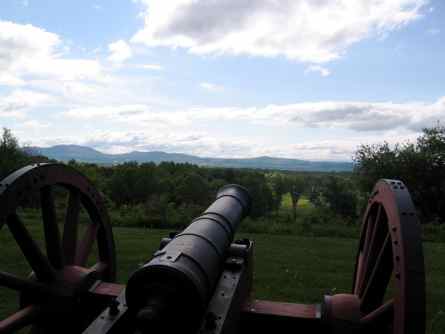 This destination is where the Battles of Saratoga took place during the Revolutionary War.  General Burgoyne of the British Army was defeated during the second battle, which is one of the most significant battles in American and world history.  As a result of the victory at Saratoga, the American Colonies became recognized as a force not to be reckoned with.  Visit Saratoga National Historic Park and learn more about this decisive point in history and why Benedict Arnold is considered an American hero.

The battlefield is located in Stillwater, only 25 minutes southeast of Saratoga Springs.  The park was established first as a state park in 1927 and then became a National Park in 1958. The park has three separate units, the Battlefield in Stillwater, General Philip Schuyler’s House in Schuylerville, and the 154 1/2 foot Saratoga Monument in Victory.  The battlefield is 4 square miles and has many opportunities for walking and picnicking.  The main visitor center and parking area are located in the northwest corner of the Battlefield.

The Wilkinson Trail, starting out form the visitor center is popular and well marked.  Even though the Wilkinson Trail is 4.2 miles long it covers less than a quarter of battlefield.  There is a nine-mile tour road around the perimeter of the park that can be followed for a more extensive historical tour.

From downtown Saratoga Springs, follow Union Avenue (Rte 9P) out of town past the Saratoga Race Course.  Continue on Rte 9P over the Northway toward Saratoga Lake. You will pass Longfellows Inn and Restaurant.  Continue over the Fish Creek Bridge, past Saratoga Tackle.  Drive along Saratoga Lake shoreline and make a left onto Rte 423 east (Battlefield Road).  Follow Rte 423 east.  Make a left onto Rte 32 north.  The main entrance to the park is on the right.