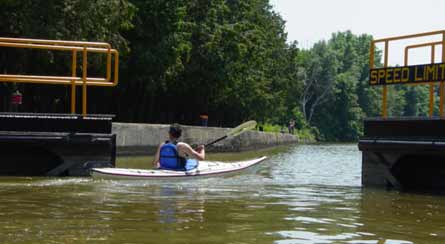 This launch will give the flatwater paddler access to a diverse waterway. This section of the Hudson River, which flows through Schuylerville, is part of the Champlain Canal, a component of the New York State Canal System. The Champlain Canal has a total of 12 locks, which start in Troy and connect to Lake Champlain in Whitehall, NY. One mile upstream of the Schuylerville put-in is Lock 5. Paddling through the lock is always an exciting adventure. It’s free for non-motorized crafts. To access the lock, paddle up to the lock and get the Lock Keeper’s attention. The Lock Keeper controls the lock and when he knows you’re there he’ll open the doors. Paddle into the lock and hold onto one of the ropes hanging down along the walls. The doors will close and this lock will lift you 19 feet up to the next section of the canal. The mouth of the Battenkill is also just upstream from the put-in, which is a beautiful wooded section of river to paddle. Paddling south from the put-in will give you beautiful views of farmland and Saratoga National Battlefield off in the distance. The current flows south. When the water levels are high, the strength of the current increases. I suggest paddling north first and letting the current help you on the way back south to the put-in.