The Travers Stakes is tomorrow, so the buzz around the office is “Who are you betting?”. Which is a pretty easy question to answer, depending on the bet. To win, American Pharoah is the obvious pick, I don’t think anyone reading this will disagree with that.

However, there isn’t much value in betting American Pharoah to win, as the live odds have him at 1-5 (which means a $2 bet will pay $2.40). So lets talk exotic bets! 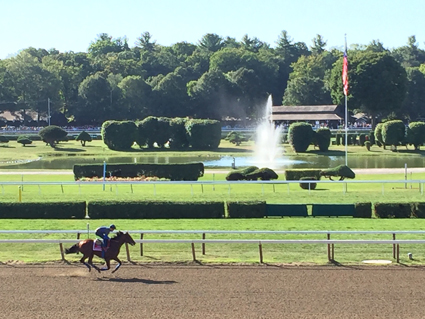 American Pharoah’s workout at Saratoga Race Track on Friday morning.
TRIFECTA’S BABY
We’ll put American Pharoah in 1st. This horse has won everything, and is arguably the second-best race horse in history (2nd to Secretariat, of course). Just blowing away the competition, practically trotting past the field, winning by absurd lengths.
In 2nd Place we have to go with Frosted. Frosted came in 4th at the Kentucky Derby, and finished 2nd in both the Belmont Stakes (behind Pharoah) and the Jim Dandy at Saratoga earlier in the meet. He’s also got seven more top-2 finishes in his career. Rosario has been in the money 59 times this meet, and McLaughlin has the best winning percentage of all the trainers with at least 30 starts at The Spa. Early odds on Frosted are 6-1.
3rd Place is a tough one for us, so we’re going to give you two horses (and will probably bet both triples).
Texas Red won the Jim Dandy (beat Frosted) at Saratoga a few weeks ago. This horse has run eight races so far, and finished in the money seven times. He’s a closer, so watch for him to come around that last turn and hit the afterburners. Texas Red’s early odds are 8-1.
Keen Ice. We love Keen Ice to come in 3rd place. He finished third at the Belmont Stakes, and second at the Haskell a few weeks ago (both races were won by American Pharoah). Javier Castellano has a chance to tie the record for most Travers wins (4) tomorrow atop Keen Ice after Desormeaux opted to mount Texas Red instead. Early odds on Keen Ice are 12-1.
Those are our picks, do with them what you want. ( 2 | 6 | 4 ) and/or ( 2 | 6 | 7 ) in the trifectas.
I should note that I am by no means a handicapper, I just live near Saratoga and enjoy going to the races on the weekends.