Visit Saratoga.com For Everything Saratoga
Enter Giveaways Advertise
Home  »  Community  »  Saratoga County Fair’s 175th Season Starts Next Week
The Saratoga County Fair has been bringing rides, games, shows, animals, music, tractor pulls, demolition derbies, and so much more to the Saratoga Springs community for nearly two centuries, with this year marking the 175th anniversary.
With an epic history behind the fair, a strong presence in the local community, and a brand new event no other fairs are doing, this year promises to the best yet for the Saratoga County Fair. 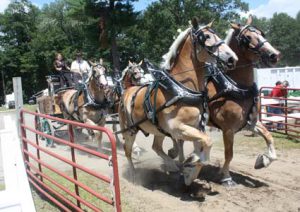 Photo provided
The fair started in 1841. At the time, there were only 26 states in the nation, eight presidents had held office, and Canada was not yet a country. The Saratoga County Fair predates most of the agricultural fairs in New York State and even the US, and was also around before the Saratoga Race Course.
A commemorative meeting was held at the Saratoga County Office Complex in Ballston Spa in March of this year, which included descendants of some of the original board members of the Agricultural Society from 1841: Steven Merchant, Nancy Voehringer, and Ronald Ellsworth.
Since January, the Board of Directors of the Saratoga County Agricultural Society has been attempting to track down descendants of the “Original 46” – the 46 members of the executive committee who started the fair. So far, they have located over a dozen of the original families to date.
Over the years as the fair has grown and evolved, it has only further solidified its importance in the Saratoga area and Capital Region at large. The purpose of county fairs in New York State is to “promote and reward the best agriculture and domestic manufacture” – and the Saratoga County Fair accomplishes this mission to the fullest.
Last year, the fair awarded over $42,000 to winning contestants. The fair and other events at the Saratoga County Fairgrounds and Expo Center have generated over $14 million annually in economic impact for Saratoga County.
“The communities around us depend on the Saratoga County Fair for tourism, jobs, and entertainment every year,” said Dona Frank, publicist for the fair’s 175th anniversary season. “People look forward to attending the fair each year – it just keeps getting better and better.”
The fair has several brand new events this year in commemoration of the 175th anniversary you won’t want to miss out on, including the following:
The Saratoga County Fair has draft horse displays going on all week that draw guests from throughout the Northeast, including Canada, to see these amazing shows and competitions. These magnificent horses and drivers compete in single cart classes as well as in teams.
“The average weight of each horse is 2,000 pounds, each harness is 150 pounds per horse, and the wagon weighs roughly 3,500 pounds, totally 16,400 pounds for each six-horse hitch,” Julie Armer-Carson, horse trainer, said in a statement. “The ground rumbles when they are moving around the ring.”
The Eight-Horse Hitch competition is truly exciting and unique, and brand new to the fair this year. This competition is happening on Wednesday, July 22nd. This event is bigger and more exciting than ever with an extra 4,000 pounds of thunderous, earth-shaking horse power.
The fair is running Tuesday, July 19th through Sunday, July 24th. General admission to the fair is $12, or you can purchase a season ticket for the entire week for $40. A $20 hand stamp allows you to ride rides all day, any day at the fair as part of the Pay Once Price Rides – enjoy unlimited rides! Free parking is available in the fair operated lots A, B, D, and E. It goes without saying that the usual spread of delicious fair food will be available all week long!
Whether you’re attending as a vendor or a guest, you definitely want won’t to miss out on the 175th anniversary of the Saratoga County Fair. Come out and be a part of this amazing event that has become such a prominent place in our community.