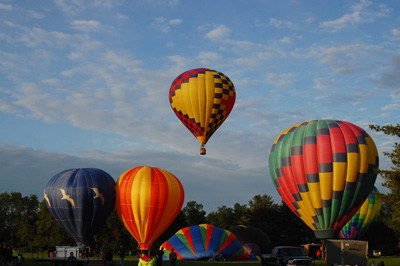 Even an attack by the Pompanuck Pirates during the opening ceremonies couldn’t keep these intrepid balloonists down!

The Ninth Annual Cambridge Valley Balloon Festival is kind of like a balloon itself – it keeps getting bigger and bigger.

June 5-7 in Cambridge, as many as 3,000 spectators made this one  the largest, most successful festival yet. The organizers, the Cambridge Valley Chamber of Commerce,  reported good turnouts even at those early misty morning launches and an almost maximum capacity participation in the Taste of Cambridge and Moonglow events Saturday evening.

Then there were those pesky Pompanuck Pirates who attacked the opening ceremonies, creating an air of derring do to the whole spectacle.   But the crowd took it all in stride, where some came to watch, some to help, some to eat and snap photos and some…to fly. Both early morning launches were calm and beautiful, with light breezes gently floating the balloons over the village, heading north up the valley.  There were ten balloons in all sponsored by local businesses (sending a balloon aloft can be an expensive proposition!) and contests were held to provide a brave few with an awesome view!

While the event is over for this year, it’s certainly not unheard of to see a hot air balloon floating silently over the hills of the Battenkill Valley at either end of the day in the Summer and Fall.  The sight is at once startling and beautiful.  And if you happen to be there at touchdown, the crew might even treat you to a glass of champagne!