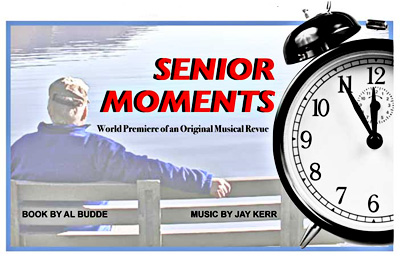 You don’t have to go all the way to Broadway to see Broadway actors – we’ve got them right in your backyard!  Come to the show at the Fort Salem Theater and I personally guarantee you’ll be surprised and delighted by what you see.  Jay Kerr has done a beautiful job restoring the grand old theater and his connections from his music coaching career on Broadway help him entice some amazing talent our way.  The show is about seven sexy seniors who prove that youth is a state of mind, and it’s for anyone who is a senior or planning on being one some day.  It’s an original
musical, with a book by Al Budde (yours truly!) and music by Jay Kerr. In the tradition
of our earlier masterpieces, Corn! The Musical and StarCrossed, Salem’s
pied pipers of homegrown musicals lead you down the path of least
resistance with a story of all-inclusive partying during the last voyage
of a Mississippi riverboat. A cast that features a Broadway Tony
nominee, local and regional professionals and Greene County’s Senior
Citizen of the Year 2011, 82 year old Florence Hayle.  Call now for tickets: 854-9200.  Showtimes are July 29 and 30 at 8pm, Sunday, July 31 at 2pm, and again on the following weekend August 5,6, and 7.