Visit Saratoga.com For Everything Saratoga
Enter Giveaways Advertise
Note: Saratoga.com is not responsible for posts and comments written by non-staff members.
Home  »  Uncategorized  »  Fear This! Much More Than A Haunted House… 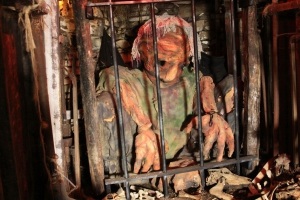 Why settle for just another haunted house when you can experience an entire haunted COURThouse?!  Fear This brings its terrifying tale back to Salem again this year to the old Salem Courthouse, where something has apparently gone horribly wrong!  It seems that the tail end of Hurrican Irene swelled the White Creek, flooding the entire basement of the Courthouse and Jail.  The high water damaged the electrical system, leaving certain cellblocks unlocked.  Now it is unclear whether the guards or the prisoners are in control of the premises.  Whoever is in charge is meting out some harsh justice based on the horrifying sounds coming out of there, but you’ll just have to come and witness what’s going on for yourself.  Tour the different levels of the Courthouse – including (if you dare) the old jail – then head outside through the maze and then down into the depths of the labyrinth under the Courthouse itself.