After hearing that the owners of Chianti’s, Forno, and Pasta Pane were opening a Spanish tapas place, I was on the countdown for opening day. 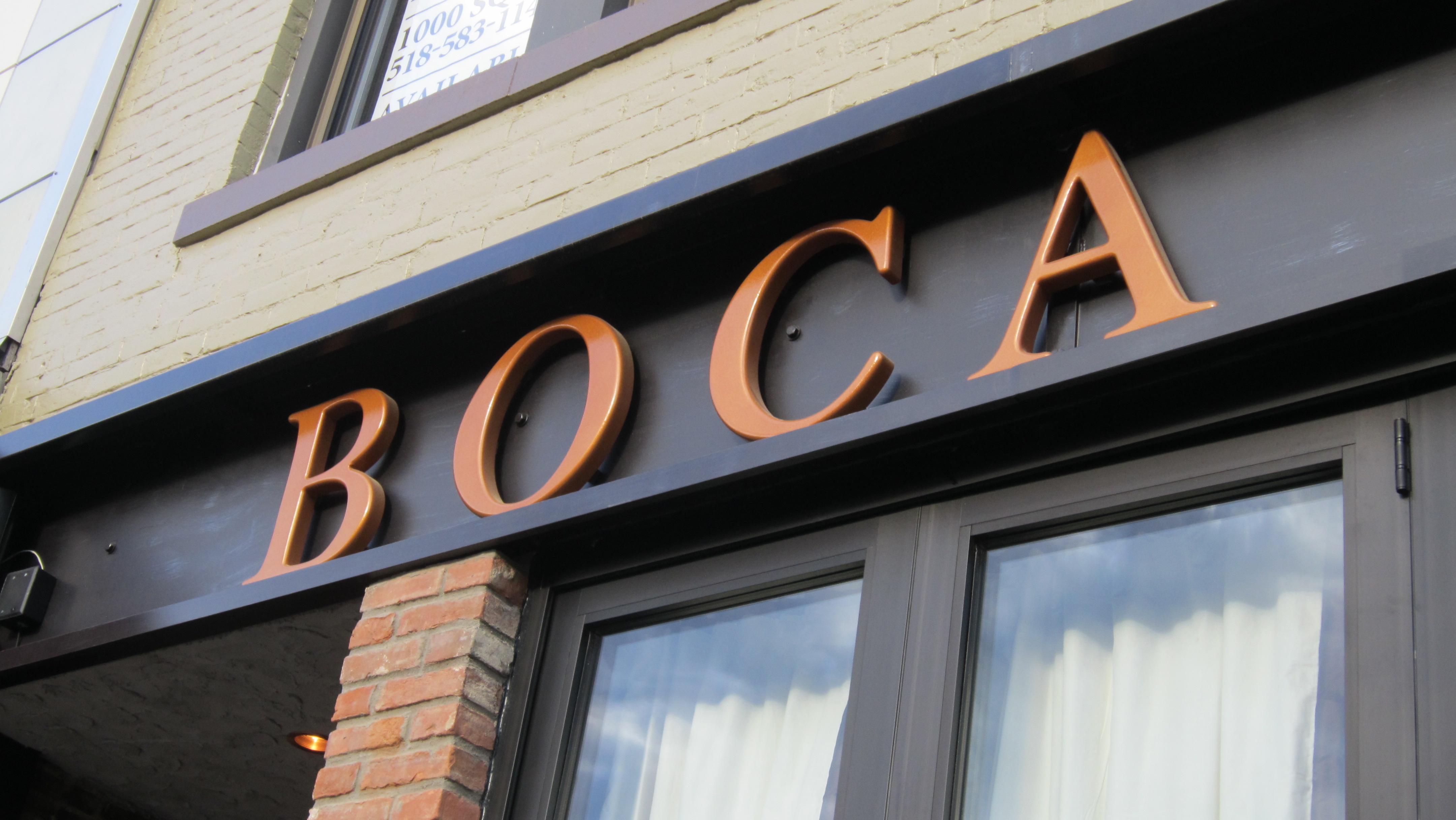 What’s great about tapas is that it allows you to order a few different things off of the menu since the portions are smaller. We started off with our usual fare- beer! Boca carries a Spanish beer called Estrella Damm which was Damm good! 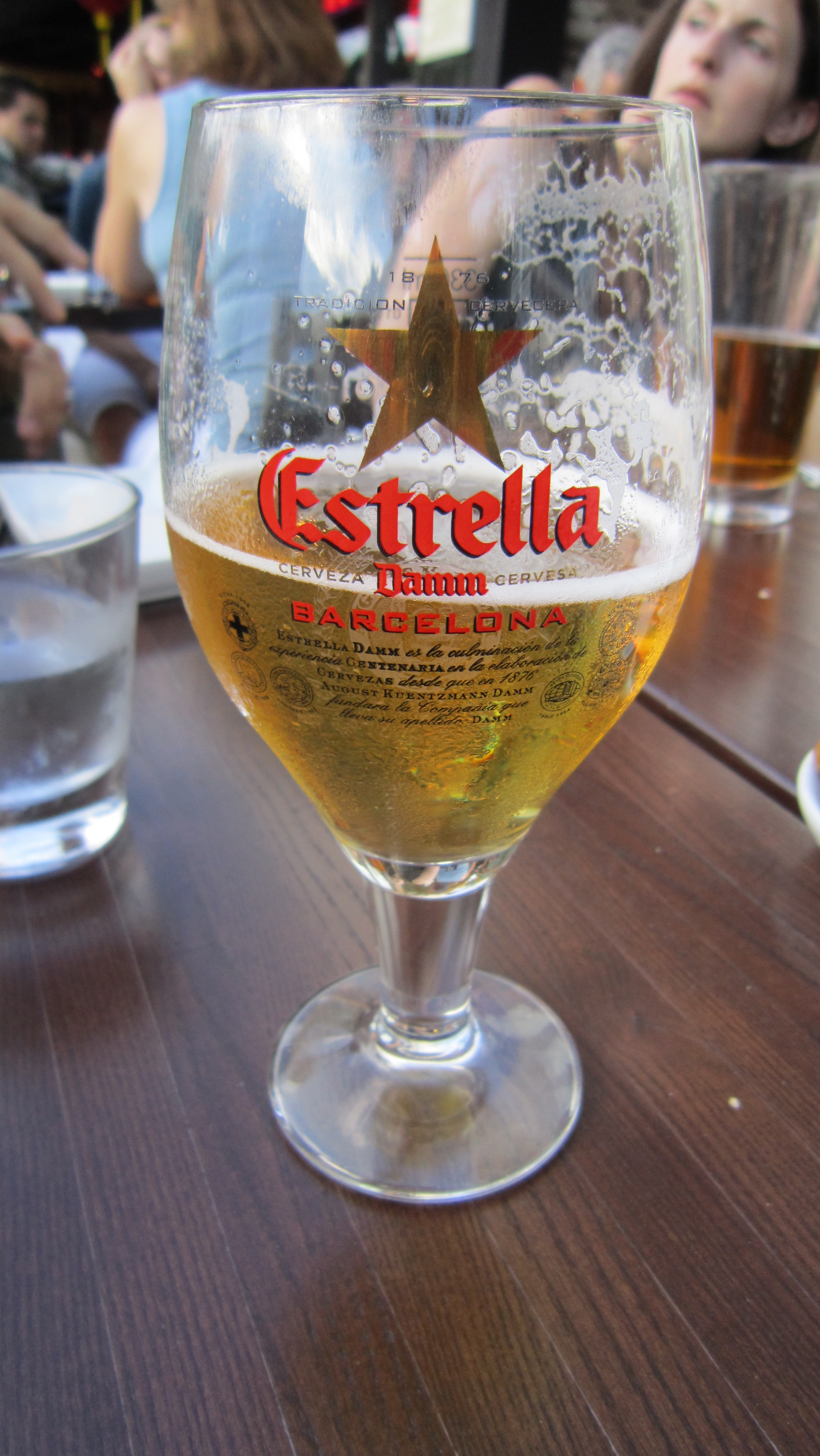 It’s a light crisp beer with honey undertones that went down like water and I highly recommend it. Just writing about it is making me want one! After a couple of those I decided to try a glass of Rueda (a wonderful Spanish white wine), which went along very nicely with our meal. We started off with the chorizo pomplona from the charcuterie menu. The thinly sliced sausage had a great smoky flavor to it and went well with the marinated olives and bread that they served. Although we enjoyed the meat very much, I think we will experiment with their cheese offerings next time since they have a great selection. 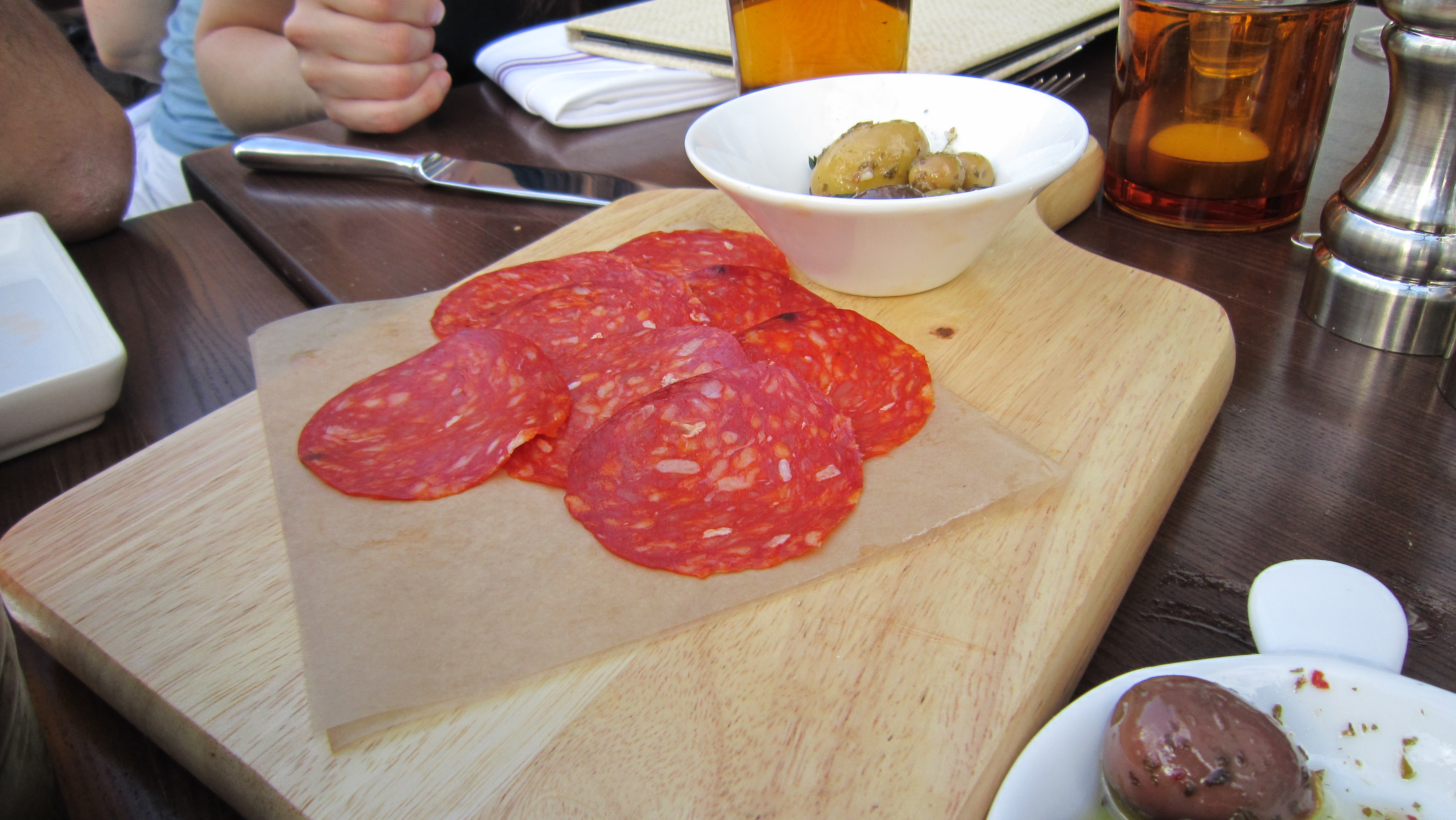 For our main course, we ordered the eggplant fries (Berenjenas Fritas), stuffed dates (Datiles Rellenos), and the octopus (Pulpo Con Patatas). The dates and octopus were mucho delicioso!! What was so great about the dates was that they were salty and sweet as well as crunchy and chewy. The dates were stuffed with valdeon (Spanish blue cheese) and marcona almonds (a Spanish almond that is shorter, rounder, softer and sweeter then the California variety) then wrapped in bacon and served with a mustard glaze. The only disappointing thing about them was that I had to share. 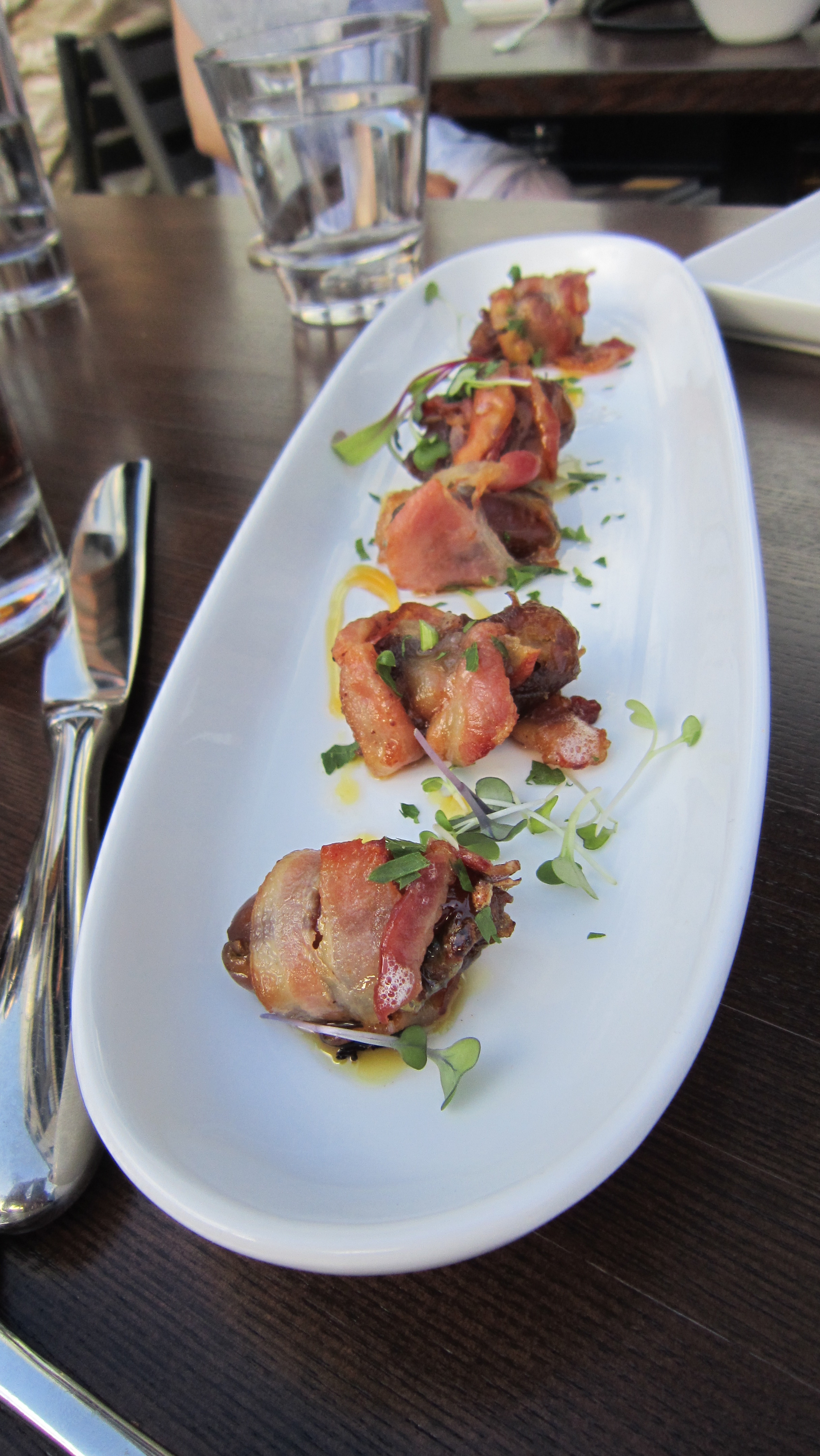 The octopus is a must try as well and is served with potatoes, saffron vinaigrette and arugula. The flavor and texture of the tentacles paired really well with the saffron potatoes. 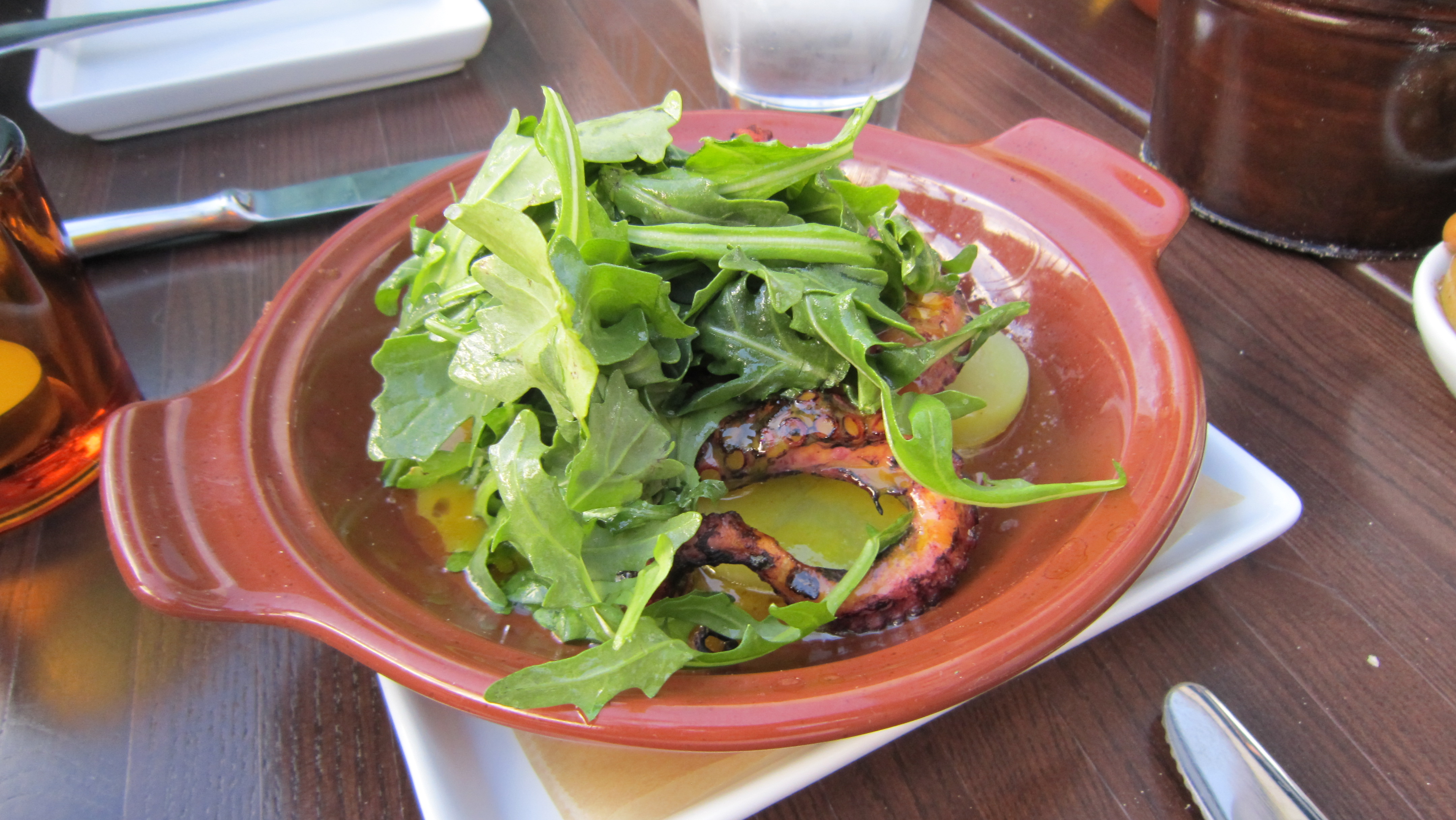 The eggplant fries on the other hand were not so great. They were a little soggy and flavorless and I would not recommend ordering them since there are so many other exciting things to choose from on the menu. A couple other items that caught my eye and will try next time are the Huevos Fritos Con Chorizo which is Spanish chorizo with crispy potatoes, fried egg and aioli and the Croquetas Jamon which are Serrano ham fritters. What’s great about Boca Bistro is that you can go there for a meal or stop in for a drink and tapas before heading out to dinner.

David and Roslyn Zecchini are the owners of Boca Bistro and have built quite a reputation for themselves in the area. Their first restaurant, Chianti’s, serves exceptional northern Italian fare and has been one of my favorite places to dine for years now. David left Rome back in 1998 and headed for California to become a restaurateur. After much success, he decided to move to Saratoga and continue his passion right here in the Capital District. I’m so happy that we get to benefit from his vision because the food and décor at all of their restaurants is fabulous. Their most recent under taking, Boca Bistro, has been years in the making. A trip to Barcelona back in 2011 was the push they needed to go ahead and make it a reality. They immersed themselves in both the culture and the cuisine and all I have to say is gracias for a new great place in downtown Saratoga. Boca Bistro is located at 384 Broadway in Saratoga Springs.
To follow me on my culinary adventures, please visit www.JenniferSavino.com and “like” me on Facebook and Twitter.