The holiday season is one of my favorite times of year, and being in New York City in December is magical. The energy, people, holiday lights, festive decorations, tree and of course food are all so much fun to be a part of. We booked our trip a few weeks back which meant I needed to start doing some research on which foods we will be eating and where we should have dinner. Baked by Melissa cupcakes have been on my hit list for a long time so they were a top priority for me. What I love about these mini cakes is that they are all about the size of a quarter which allows you to try a lot of different flavors. 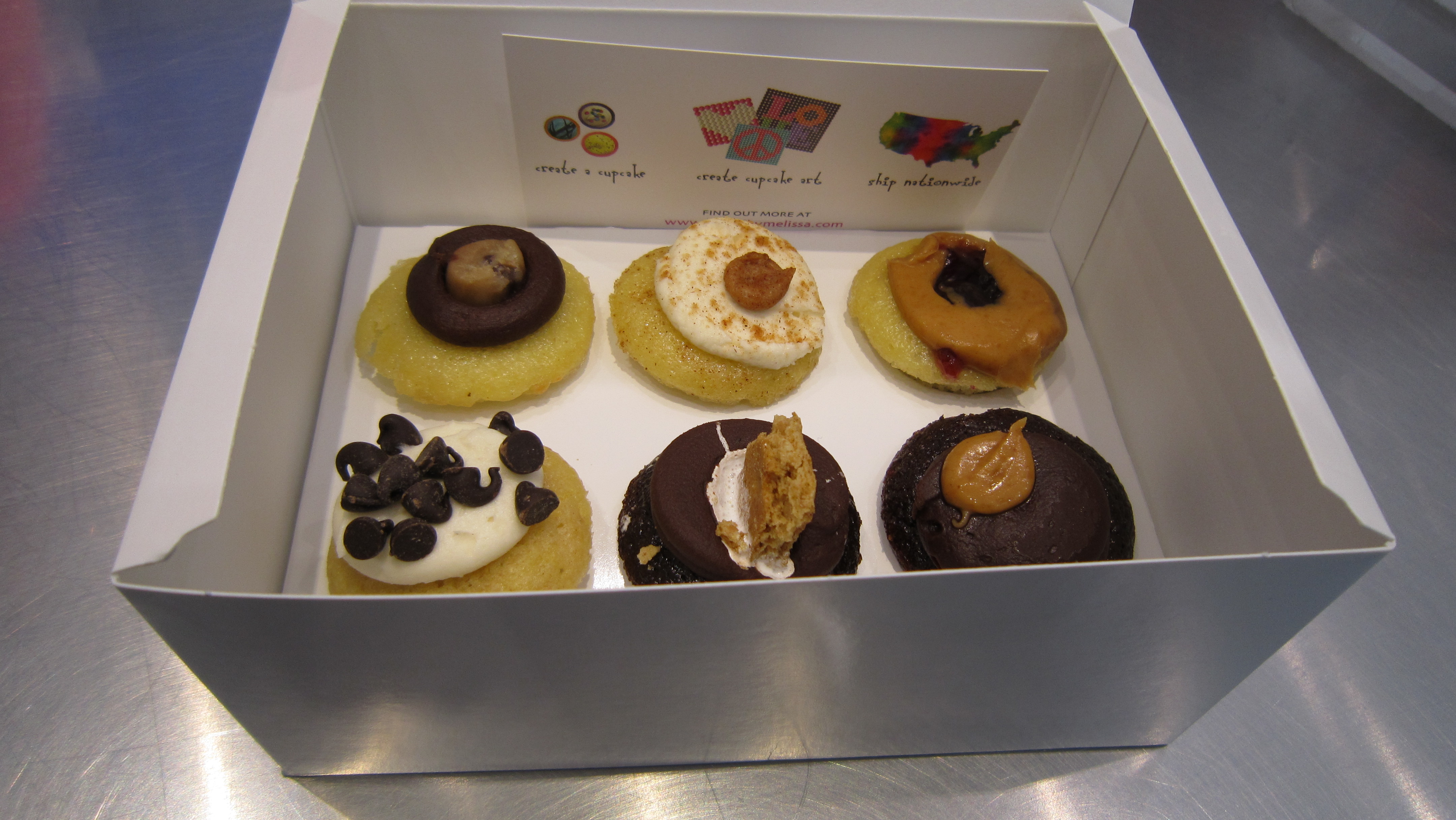 I tried the S’mores, Cookie Dough, Chocolate Chip Pancake, Cinnamon, Peanut Butter cup, PB & J, Red Velvet and the mini of the month which is a vanilla cake with fudge stuffing, vanilla icing and a snowflake coconut crunch topping. They were worth the wait because they were all delicious. The cake was moist and the flavors were great. My favorites were the PB & J, Snowball (mini of the month) and Cinnamon, although I really loved all of them. After my “mini” sugar fix, we headed to the holiday shops in Bryant Park. I stumbled upon the French macaroon booth which not only got me psyched for more sugar, but looked beautiful as well. The array of colors and flavors offered by Woops macaroons and cookies was so much fun to look at. 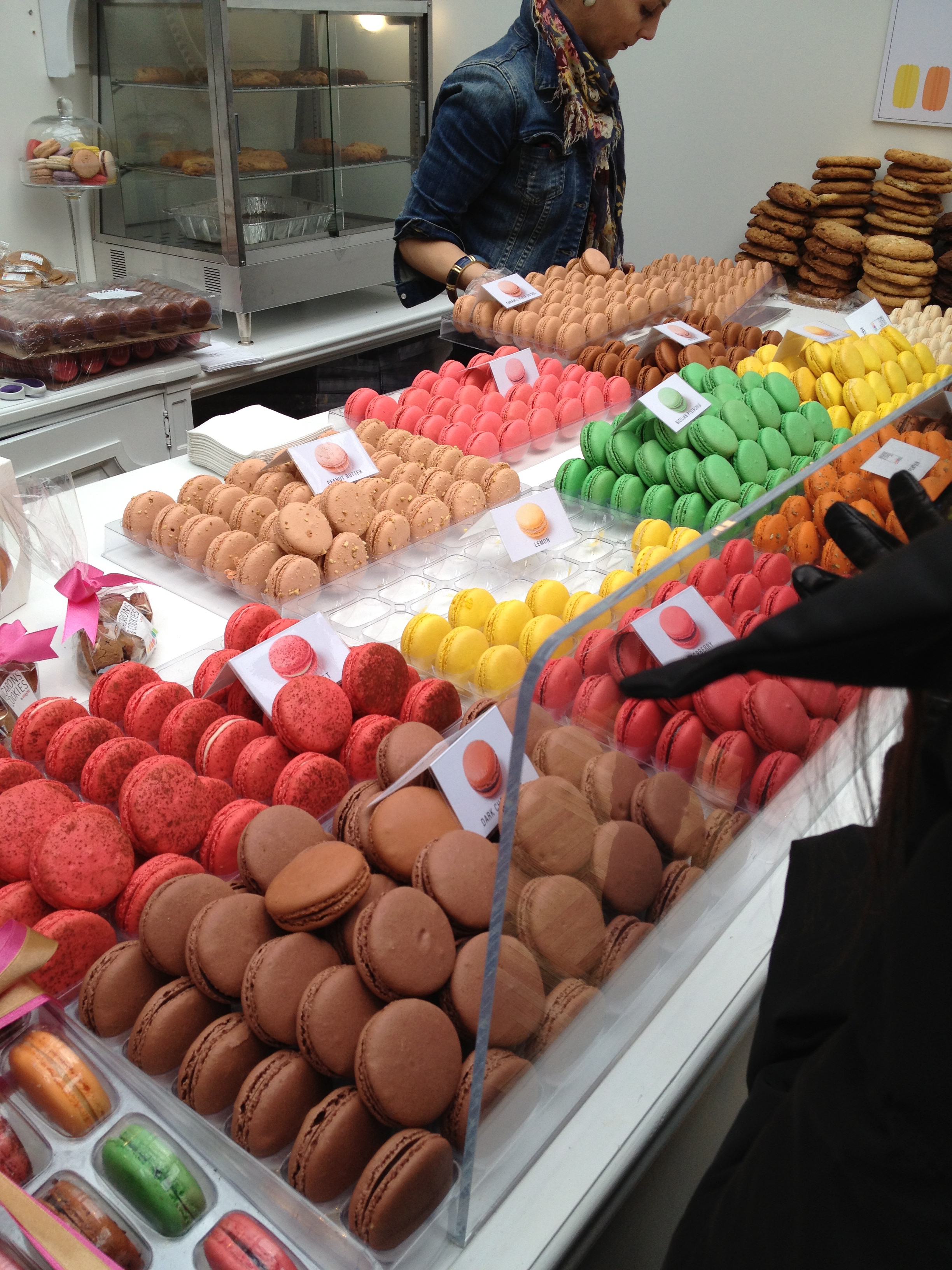 It was a tough decision in terms of what flavors to get because they offered 15, but we went with Nutella and Caramel Fleur De Sel. 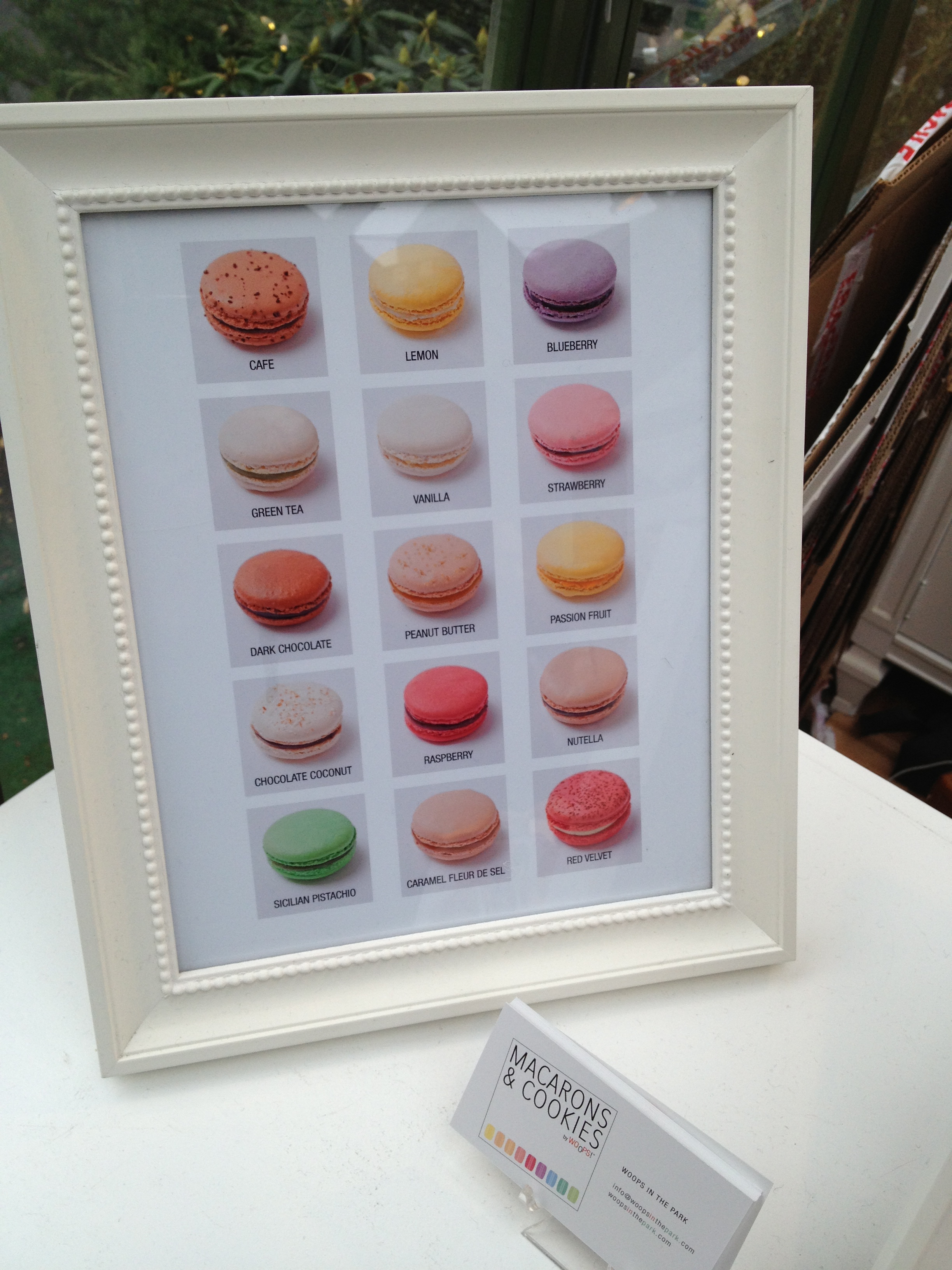 Both of them were excellent but the Caramel Fleur De Sel was absolutely unbelievable. It had a rich butter flavor and just enough sea salt to balance out the sweetness. After working towards a diabetic coma, we figured it was time for lunch. Not really having an agenda, we walked down 5th Avenue looking down side streets to see if we could find something that looked interesting. We found a place called Brinkley’s Station offering up classic American fare from local New York farmers, markets, winery’s and brewery’s. This is the way to support local businesses for sure! After grabbing a spot at the bar along with a Six Point Righteous Rye, it was time to check out the menu. We were given the brunch menu which I thought was a little weird because it was about 2:00 on a Saturday and they also offer a lunch menu but that’s okay. The selection was still great and after looking things over, I went with the eggplant and chickpea burger. 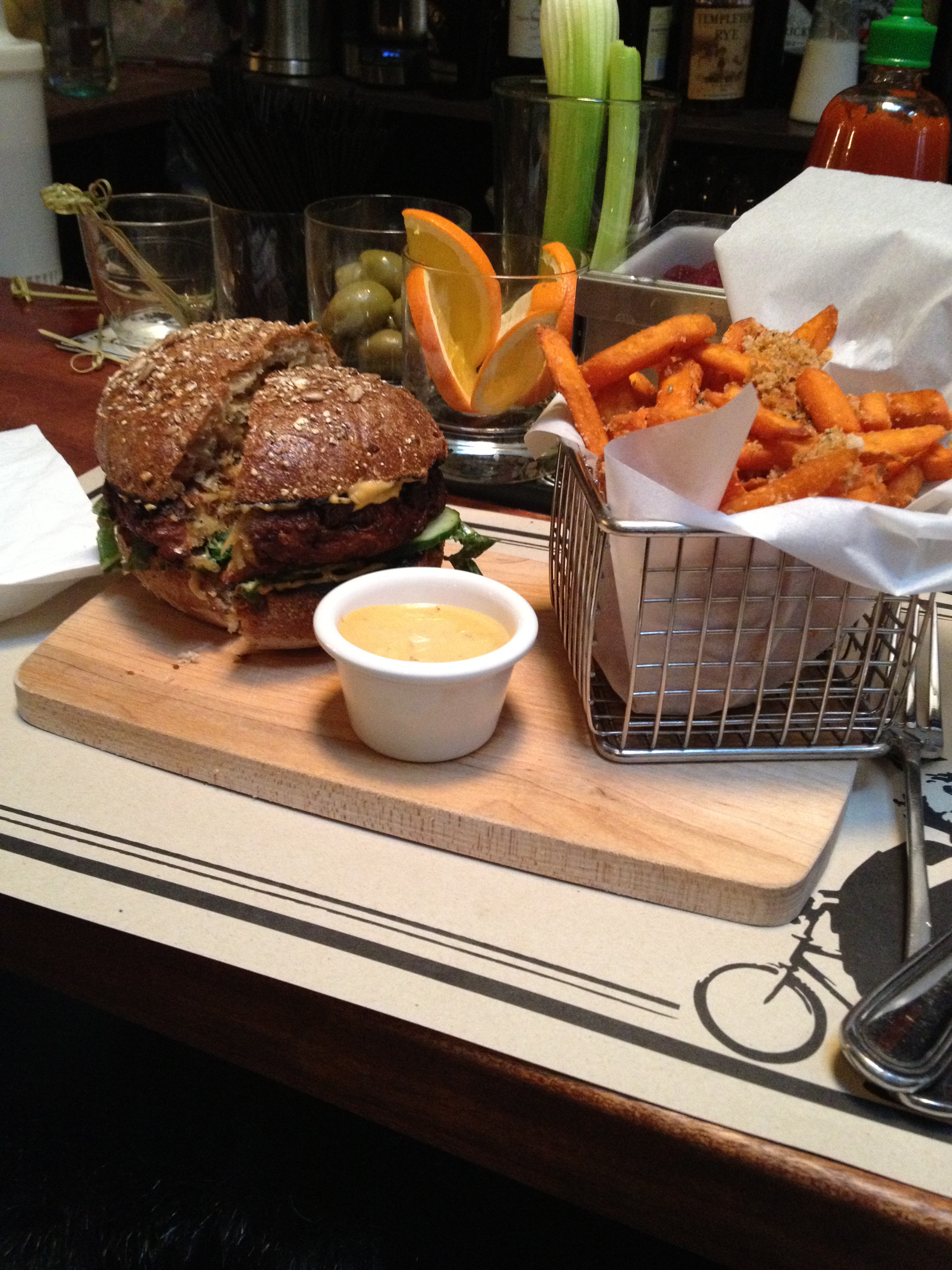 It came with spicy Tahini dressing and thinly sliced cucumber along with kale on a 7 grain bun with a side of sweet potato fries. This dish was awesome! The burger had really great flavor and the fries were served with a very generous dusting of some sort of brown sugar spice mixture. The dipping sauce was a chipotle mayo as if the brown sugar topping alone wasn’t enough. I absolutely LOVED these. Now that I have the fuel to power down the rest of 5th avenue, it was time to do some shopping. After seeing the spectacular windows at Saks, and the amazing décor on the outside of Harry Winston and Bergdorf Goodman, it was time to check out the Rockefeller tree. Making our way through human grid lock was worth the pushing and shoving because as always, it’s quite a beautiful sight. I had one more place on my hit list (involving sugar of course) and it was Momofuku Milk Bar. There’s a lot of hype around their amazing cakes along with their Compost Cookie. 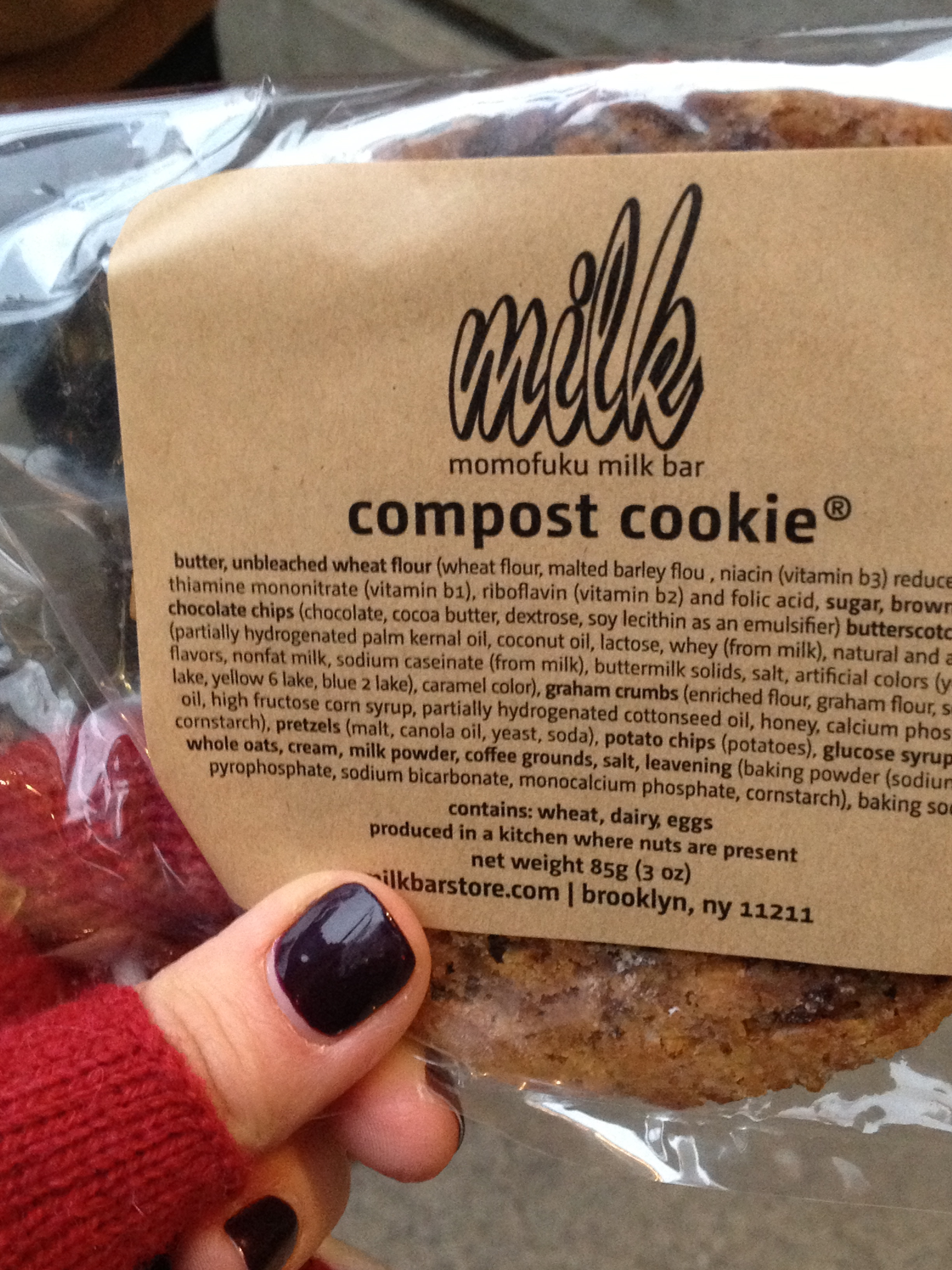 I would consider myself a cookie connoisseur because it’s one of my absolute favorite things to eat and I’ve probably consumed more then the average human being. When I heard that the Compost Cookie consisted of chocolate chips, graham cracker crumbs, potato chips, pretzels, oats, coffee grounds and toffee, I had to get my hands on it. Luckily there was a location close by so we stopped in to see this work of art in person.

I have to say that the cookie looked great but it honestly tasted like a toffee cookie which was a little disappointing. It was a good cookie, don’t get me wrong, but I don’t really see what all of the hype is about. Save the calories for one of the other 8 million amazing things offered in New York. The weather was starting to get cold and windy which meant it was time for a little winter warmer a.k.a. cocktail. We wanted to go somewhere cozy and Christmassy and the Cock and Bull British Pub was both. The beer selection was good and I guess they are known for having a couple of rare British beers on tap. I was in the mood for wine so it was Cabernet Sauvignon for me. The place was decked out for Christmas and Bing Crosby was keeping things festive. We figured we would come up with our dinner plans despite the fact that I had already made a few reservations. My first choice was Mario Batali’s restaurant Babbo, but it’s one of the hardest places to get into. I called the day of to see if there were any cancellations but no such luck. I decided to cancel our reservations at his other restaurant Lupa along with our reservations at Bobby Flay’s Mesa Grill since they were both a little bit further away and we didn’t want to risk missing our train. A nice trade off was heading to restaurant row between 8th and 9th Ave in the theater district. We didn’t have reservations anywhere so I popped in to about 5 places till I found one with less then an hour wait. It was a great little Italian restaurant called Lattanzi. After waiting about 20 minutes, we were seated in a beautiful room with brick walls, a wooden ceiling and lots of candlelight. 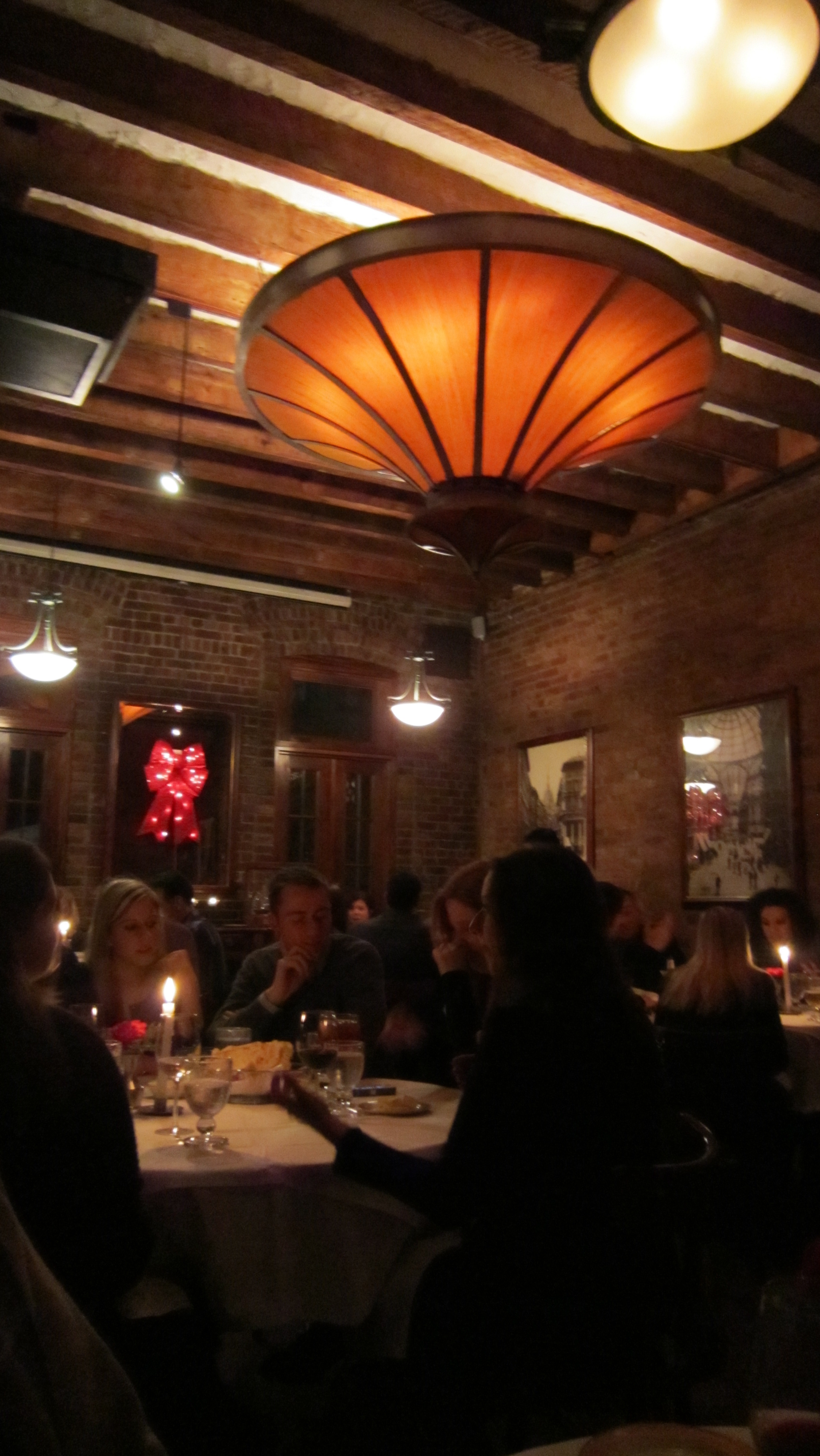 While noshing on bread sticks and sipping some wine, we decided on ordering the tortellini which was filled with veal and chicken in a tomato sauce along with the Veal Scaloppini. 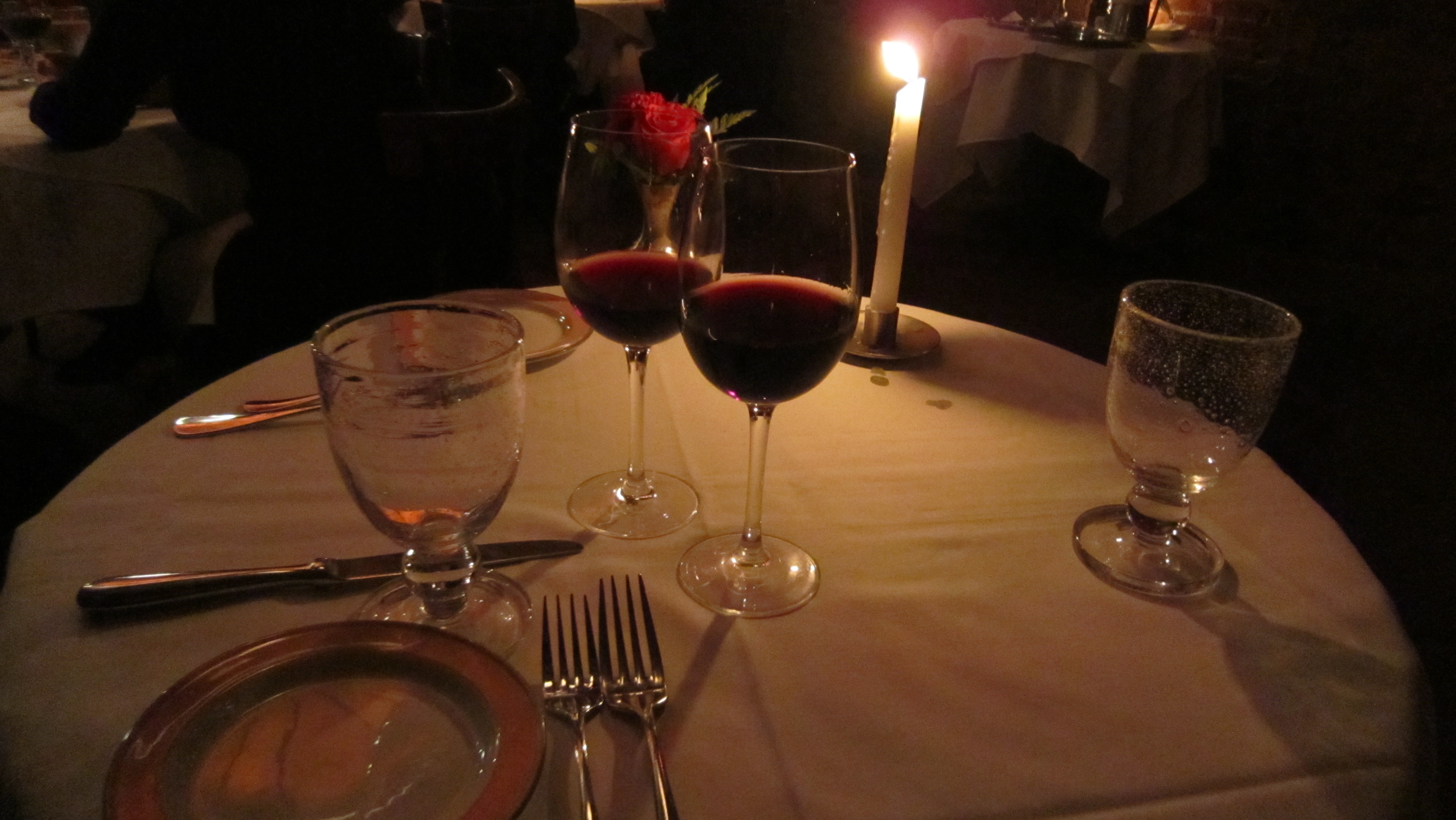 The food was very good but definitely not out of this world. The tortellini was the better of the two dishes and the potato’s that came with the veal were very good too. If you happen to be in this area and your looking for a place to eat, I wouldn’t cross Lattanzi off of your list, just don’t expect anything over and above the norm. The day was winding down so we started heading towards Penn Station. Lucky for us, Heartland Brewery was on our way back so we thought we deserved a beer for all of the walking around we did. 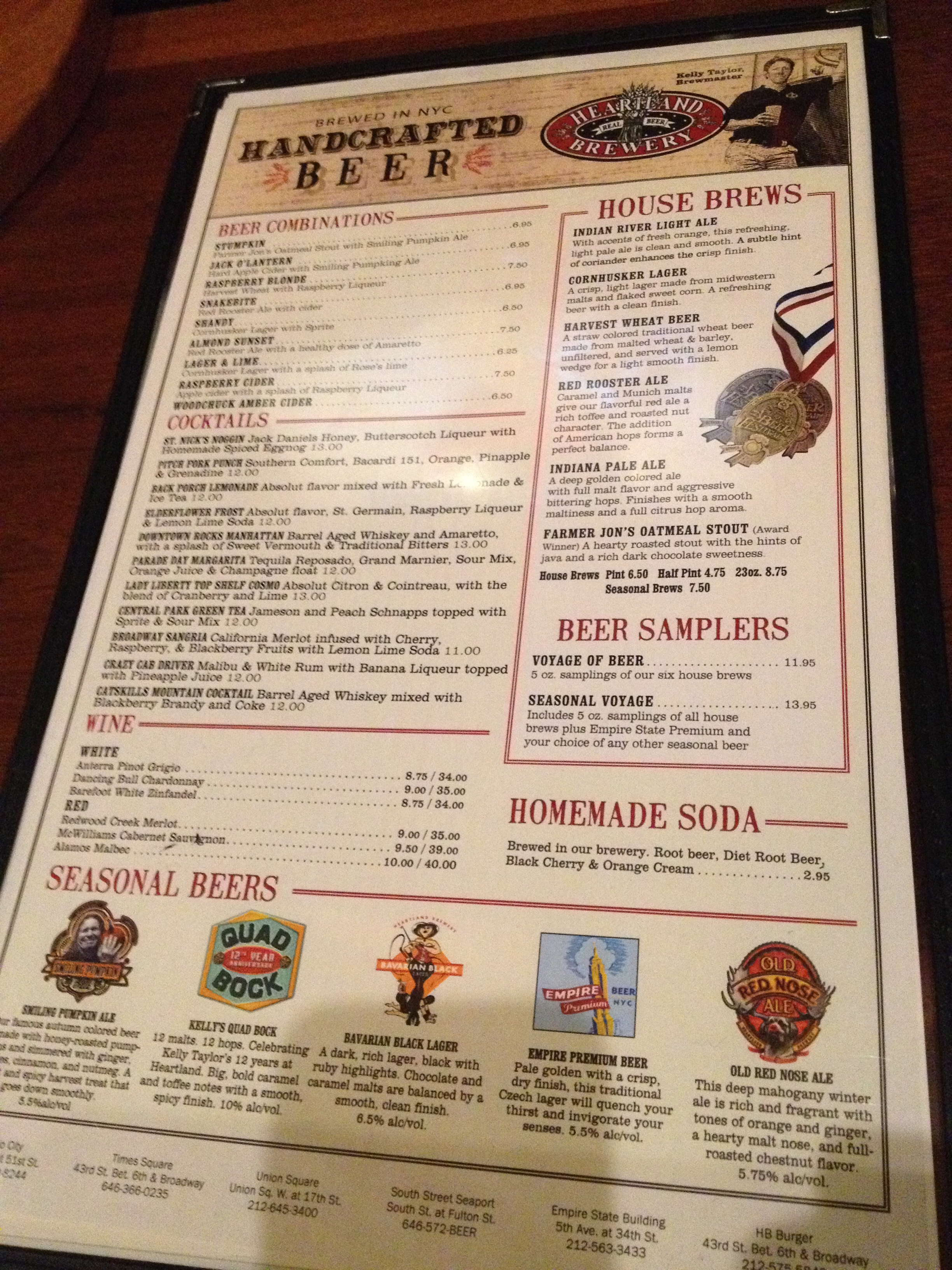 What better way to try a local brewery then ordering the sampler. 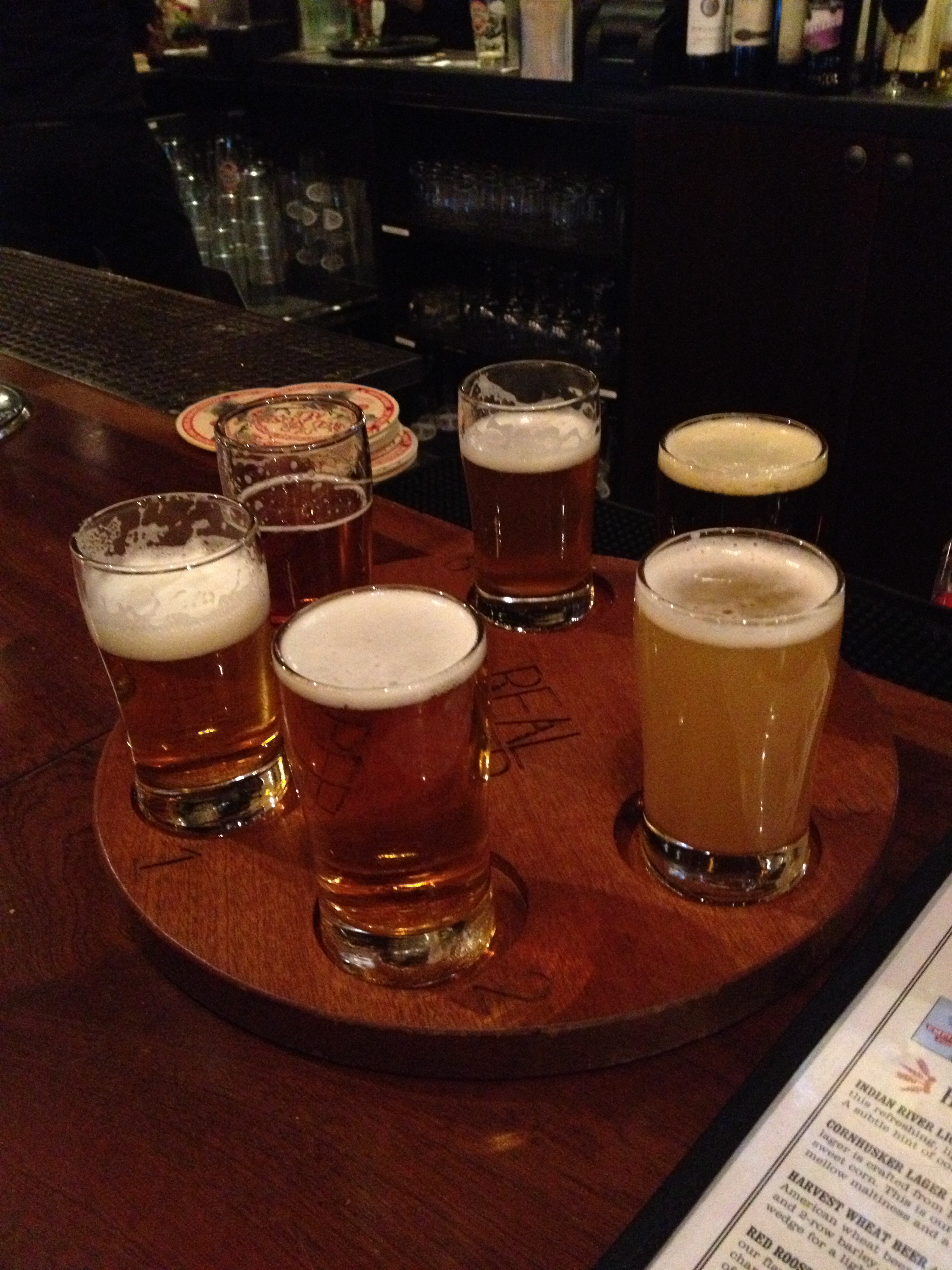 The beer was good and the vibe was cool but I think we are spoiled by Brown’s Brewing in Troy. There, I said it! The beer in Troy is better then NYC in this particular case (of course this is only my opinion☺). Our last and final impromptu stop was at Garrett’s Popcorn right next door to the train station. When I saw that they had gingerbread caramel popcorn, I couldn’t contain myself.

After a day fueled by sugar and wine, I figured lets go for the gusto and finish things off the only way I know how, more sugar! If you are in the city this holiday season, I highly recommend getting this as a snack to walk around the city with because it was AWESOME!!!
If you’re lucky enough to get to New York over the next few weeks, I hope you get to enjoy a lot of the amazing food the big apple has to offer. My picks for the day were the Baked By Melissa cupcakes, Caramel Fleur de Sel Macaroon by Woops in Bryant park, and the Gingerbread popcorn at Garrett’s. Happy Holidays!
To discover great food businesses, please visit www.BiteMeShow.com and “Like” me on Facebook and Twitter. Thank you!