When she accepted the teaching position a the Arcadia School in Arcadia Falls, New York, Meg Rosenthal just wanted to make a fresh start for herself and her daughter after the sudden death of her husband. In the process she learned more about the past and her own choices than she could ever have expected.

I was eager to read Arcadia
Falls for a few reasons: I was looking for a good mystery; I was in the
mood for some good literary fiction, and I have enjoyed all of Carol Goodman’s
previous novels (except one that I’ve yet to read!). Saying that I wasn’t disappointed
would be a gross understatement. 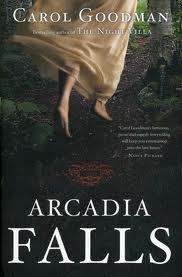 From her first novel, The
Lake of Dead Languages, Carol Goodman hooked me with her prose. The only
word I can find to describe it is haunting. The reader carries her beautifully
composed words and imagery from page to page, chapter to chapter, book to book,
and beyond. Arcadia Falls is no
exception. Like most of Goodman’s novels, this one takes place in rural upstate
New York, where the author has some roots of her own. Having owned a home in
Saratoga for almost eight years now, I’ll admit that I was a reluctant
transplant to the area. I had images in my mind of depressing winter scenes with
entirely too much snow and grey sky. But Ms. Goodman’s books promised and
delivered a very different New York State. She infuses beauty and mystery into
all of her settings and the reader is seduced and intrigued as much by them as
by the characters and plotlines of her stories.

After the unexpected death of her husband, Meg Rosenthal uproots
herself and her teenage daughter from their Long Island home with her daughter to
the novel’s eponymous town after accepting a position teaching folklore at the
Arcadia School. Founded as an artist’s colony the school maintains its
dedication to arts and letters and traditions of the past. It is during one of
the school’s traditional celebrations, the First Night bonfire, that one of the
school’s top student falls to her death. Eerily, the tragic death mirrors the
long-ago discovery of Lily Eberhart, one of the school’s founders.

During the following months two investigations merge: the
police investigation into the student death and Meg’s research into the history
of the school and, in particular, of its founders. The school has its secrets
it seems, and while avoiding the all-too watchful eyes of Dean Ivy St. Claire,
Meg will uncover them. In doing so, the truth about the women founders and the
realities of the lives and choices of women in every generation are brought to
light. In discovering the truth of the past she discovers remarkable truths
about herself and her daughter.

It was no surprise to me that I would enjoy this book. What
I find myself drawn to about Ms. Goodman’s work is her distinct way of
paralleling the lives of her characters to the regional history, art, and
literature. Arcadia Falls is no
exception. Her deft prose weaves the meta-story carefully throughout the novel
and the result is a resolution that is satisfying and relatable.

If you’ve not read Arcadia
Falls, I hope you are inspired to do so. If you have read it, please share
your thoughts and comments!

The Head and Not the Heart by Natalie Keller Reinert 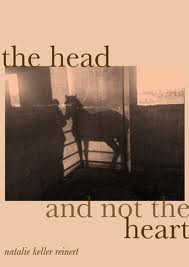