Local Wins Social Media Contest; One of 15 in Nation Bound for Big Game!

These days, she is ecstatic. Dare I say she is residing on Cloud 9!

Why? Planet Arthur has learned exclusively that Stephie, Saratoga resident since age three and Blue Streak grad, is one of 15 people worldwide who has won a contest. And it’s a biggie.

She, along with her friend and co-worker, Abbi, will be leaving town Thursday, bound for Houston. Yes, they are having some BIG GAME there Sunday, you might have heard.

Stephie, Abbi, and a few other VIP’s will be on the field at NRG Stadium during halftime, part of a select up-close-and-personal audience for the halftime performance of one Stefani Joanne Angelina Germanotta, AKA Lady Gaga!

“I still can’t believe it!” Stephie gushed when we met at The Stadium. “Lady Gaga is my idol. My inspiration!”

The contest Stephie won was announced on Gaga’s social media. It simply asked: “Tell me why you should be in my halftime show audience,” or something like that. As you can imagine, they had thousands of entries.

But only 15 winners. One was Stephie’s. The prize includes airfare, hotel, BIG GAME access and lots of other hush-hush goodies… maybe a trip to NASA? Lady Gaga does appear to be into space things. Side trip to Gilley’s? Who knows? But Stephie and Abbi will be there from this Thursday through next Tuesday, so you can imagine there will be some whoop-de-doop planned.

The winning entry itself is mega-creative. We are posting it here, from Stephie’s Instagram:

#GOHContest #PepsiHalftime Here is my entry to meet my idol @ladygaga I have been trying to see her for years, and either never had the money for a show or never had the opportunity to go, so this is something I couldn't let pass. I've been obsessed with her music, stage presence, and the pure talent she has since day one. I hope I have a fighting chance because this would be a dream come true. Thank you @pepsi for giving little monsters like me the chance of a lifetime.

A video posted by Stephanie Grzegorzyk (@stephaniegrzegorzyk) on Dec 10, 2016 at 8:20am PST

It basically involves a mash-up of Gaga song titles, multiple outfit changes, hairdos, and make-up looks. The editing by Stephie is as good as the singing, and she’s a really good singer! (She performs on a keyboard or fronts bands on vocals as often as her schedule allows.)

You can picture Lady Gaga and her posse going gaga over this entry. And, in fact, someone in Gaga Central did.

“I have no idea what’s going to happen,” Stephie says, “I do hope there’s some meet and greet. If I get a chance, I’m going to ask her to do something with me.” She told me what it was, but asked me not to jinx her by printing it. You can ask her yourself when she returns to the Stadium from the trip of a young lifetime.

“My only regret,” Stephie says, with a big-eyed look, “is that I’ll miss the party here. We (Saratoga Stadium) have so much planned…”

“We have specials every quarter on Sunday,” she said. “First quarter: 25-cent wings. Second quarter: half-price beer towers (these massive, 100-ounce skyscrapers of suds come in domestic and import varieties – during this promotion they will be half off the regular prices of $22/domestic, $28 import). Third quarter: $5 deep dish pizzas, and fourth quarter it’s half-off all desserts.”

And at halftime, many, many people will have their phones out, hoping to get a snap of Stephie in Gagaland. “Wow, it just hit me again. I could be right there!” she said, pointing to the Stadium’s massive video wall.

How nice to write something nice, about something nice happening to someone nice – right in our neighborhood. Yes, life is very good for one Stephie Gregg today- and it’s about to get a lot better – soon. Bon Voyage! 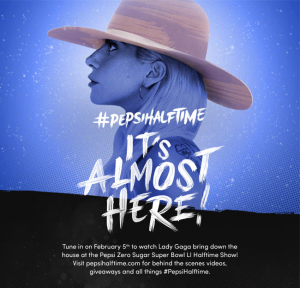