Visit Saratoga.com For Everything Saratoga
Enter Giveaways Advertise
Note: Saratoga.com is not responsible for posts and comments written by non-staff members.
Home  »  General  »  “You Ain’t Nuthin’ But A Groundhog!”

… And you party all the time… 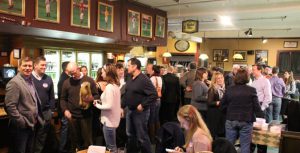 SARATOGA SPRINGS – Looks can be deceiving.

The occasion was built around the announcement – no surprise to anyone – that 5-term Saratoga Springs Commissioner of Accounts John P. Franck would seek another 2-year term. And yet, one only had to look a little deeper, and you would see much more:

You would see a gathering of friends. And family. Sure, these were the Commissioner’s people. But those who attended scarcely needed a reason to gather. In fact, remove the red-white-and blue Franck for Accounts paraphernalia and you are left with a group of professionals in TGIF mode.

Case in point. Planet Arthur somehow arrived after the Commissioner’s announcement – late to some, and yet from the look of things, Photog Dev Dinon and I were right on time. We always prefer to allow a certain modicum of, shall we say, lubrication to occur before buzzing into a room in “sheepdog-smile-snap-and go” mode. From the looks of things, it worked out quite well.

And in fact, you do the math! Eleven annual celebrations, five two-year terms, with a sixth potentially on the horizon… that would mean that last year, presumably next – there is no campaign announcement to be made – just a greeting from your host. So, yes, a political event this year, with a party at the gooey center.

“It was Tommy (McTygue – long-time Commissioner of Public Works, for those of you who just arrived here via Uber) who gave me the idea: Pick a holiday, throw a party,” Stated Commissioner Franck. “He always had St. Patrick’s Day. I chose Groundhog Day. And here we are.” Indeed, a taxidermied Punxsutawney Phil replica was never far from the Commissioner’s grasp. “Phil” may frighten when he sees shadows, but not flashbulbs. That rodent is really a ham!

But there always is a party. And a gathering of friends and family. Same as it ever was.

Planet Arthur always gives special recognition to the people who do the work so others can enjoy – and in that connection, we bestow special high honors to the woman we call “Everywhere Maire.” That would be Deputy Commissioner of Accounts Maire Masterson. In the short time we visited this soiree` we saw Maire buzzing, Maire arranging, Maire introducing, Maire posing and smiling – a whirling dervish that sweated every detail without breaking a sweat and still looking glam. Big ups for a grand time!