SARATOGA SPRINGS – Forgive the pun, but I’m hopped up over this one! The sixth annual Saratoga Beer Week is coming Tuesday. A craft beer lover’s heaven. With big events, bar events, beverage center events, tap takeovers, and one grand Beer Summit so huge, they split the event into two sessions a few years ago.

The action begins with a big kickoff party on Tuesday, Feb. 21 at Saratoga Brewing Company, 131 Excelsior Ave, Saratoga Springs from 5 to 8 pm. This event actually takes place inside the Brewery room (they also have a tap room and company store open year-round) and will feature a cavalcade of selections from 20 breweries, cideries and distilleries; these are paired with special bites: offerings from 10 local restaurants and food providers. They even have wine if you are grape-inclined.

Tickets are $30 in advance/ $35 on Tuesday, which includes a souvenir glass and unlimited sampling. For tickets, visit https://saratogabrewing.ticketleap.com/kick-off-to-saratoga-beer-week-2017/ 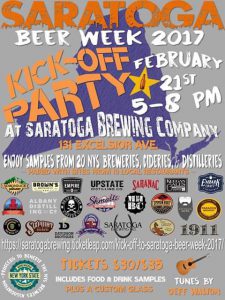 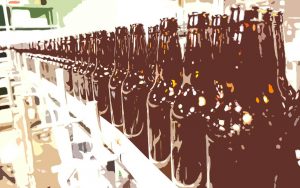 What is impressive, in addition to the beverage craftsmanship itself, is how congenial things are between the local craft brewers. It’s one big happy family, which is always nice to see.

Following Tuesday’s kickoff In addition to tastings at many venues around town, and of course, a big presence at Saturday’s Beer Summit at the City Center, Saratoga Brewing will have a schedule of Beer Week activities on their premises each night, including:

I do want to salute all the effort that goes into an event like this, which involves many bar and tavern events all around the City and beyond. Success is a result of good planning and hard work — advance promotion like when i observed GM Max Oswald of Saratoga Brewing promoting the events of Beer Week on Death Wish Coffee’s podcast. Death Wish is a key ingredient in many of Saratoga Brewing’s creations. 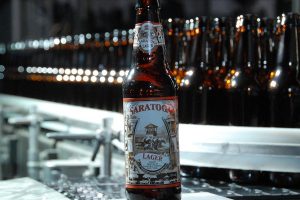 In fact, I think they deserve a toast! No need to wait for Tuesday…. Cheers to all involved!