Editors Note: Carianne Manning is a senior at Ballston Spa High School, now deciding on which college to attend for Pre-med studies. She recounts her experiences in marching on New York City as part of a nationwide women’s protest march. 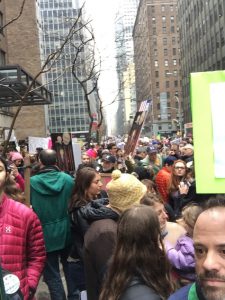 MANHATTAN – The energy in New York City on January 21st 2017 was tangible. Grand Central Satiation was littered with pink “pussy” hats and signs that included comic relief, which made me smile more than once. My sister and I took the Amtrak into Grand Central from Connecticut and to say the train and the station were busy would be an understatement.

When we made it to 5th and 47th I felt a wave of energy and upset from my fellow protestors that congregated on the street. The police had blocked our original marching route and after two hours of waiting for the police to let us through the entire crowd turned around and marched the opposite way. 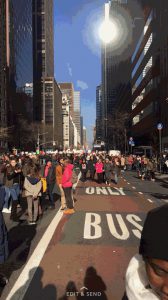 We marched up 5th Ave passing all of the high-end boutiques and straight towards Trump Tower, suddenly there was a shift in the crowd and chants that indicated Chuck Schumer had shown up. Schumer didn’t formally speak at the march but he stood on top of a garbage bin and waved to all of us while we applauded him.

We took over streets that weren’t originally intended for the march and held up traffic for hours, which angered drivers who were stuck in their cars. We (about 100,000 people) continued to march until about 5 buildings away from Trump Tower were we hit a police barricade of police vehicles and police themselves, after staying there for about an hour most protestors dispersed and signs littered the streets. We had marched about 5 miles in all, but because of the amount of people it felt like it was three times longer than that.