Visit Saratoga.com For Everything Saratoga
Enter Giveaways Advertise
Note: Saratoga.com is not responsible for posts and comments written by non-staff members.
Home  »  art  »  Town and Gown: News from Skidmore College! 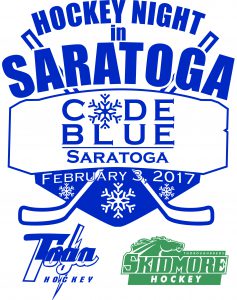 The Thoroughbreds host Castleton University in a Senior Night game at 7 p.m. in the Weibel Ave. Rink, while the Blue Streaks play rival Bethlehem High School at 6:45 p.m. in Vernon Arena.

Each team will have fundraisers, including a special edition Code Blue t-shirt that will be available in limited quantities for $10. Donations will be accepted at the door.

There will be a ceremonial puck drop at both games along with several in-game promotions. In addition, several vendors will be in attendance, with a portion of their profits going to Code Blue.

Code Blue Saratoga, a program of Shelters of Saratoga, provides temporary unrestricted shelter to individuals who are homeless during periods of hazardous winter weather including sleeping accommodations, meals, and essential supplies. Code Blue Saratoga is funded by the generous contributions of many supportive individuals, foundations and businesses.

SARATOGA SPRINGS — Friday, Jamuary 13th turned out to be a lucky day for the Skidmore College culinary team as it accepted a gold medal for culinary excellence during the sixth annual competition sanctioned by the American Culinary Federation.

The gold medal was Skidmore’s fourth in a row at the campus-hosted event and the fifth gold won by Skidmore College chefs over the past three years. Skidmore’s culinary team consisted of Paul Karlson, Ron Wall, Jesse Staigar and Joe Greco.

Mark Miller, director of dining services, said of this year’s event, “We are extremely proud of our gold medal, and it is our pleasure to host this unique event each year to highlight Skidmore College, our facilities and the culinary talent of our staff. We were pleased that all teams and judges were impressed with the quality of our food, the friendliness of our staff and the overall content of the event.”

The “Chopped”-like competition challenged four-person teams to create unique and delicious recipes using identical baskets of ingredients and a shared table of staples and spices. Facing tight time limits, and without using broilers or fryers, they had to produce a salad or appetizer, a soup or dessert, an entree, and also a buffet platter. The dishes were to be stylish but practical, nutritionally balanced, with complementary flavors and textures and good eye appeal.

In the end, Skidmore racked up the most points, starting with its corn-dusted skate, napa slaw, and lentil salad with tropical fruits and mango vinaigrette. Next came pheasant roulade with a bacon, pistachio, and pear farce, alongside creamy herbed bulgur and herb-buttered cauliflower and marble potatoes, sauced with a lager and pear reduction. For the buffet platter: bison flank steak with an avocado-lime emulsion and a stir-fry of rice noodles, napa and bok choy, and toasted macadamia nuts. Dessert was lemon-curd tarts with pistachio and walnut crust, pomegranate-berry sauce, and lime whipped cream.

Such gold-medal fare typifies Skidmore’s menu for major catered events, and has even appeared on the student food-service line.

February 2–March 5, 2017
Opening reception: Thursday, February 2, 5:30–7 p.m.
Each year, Skidmore students submit works in all materials, and from an average of 250 entries, a guest juror typically chooses 50 – 75 works for exhibition, and ten outstanding works for special awards. Awards and gift certificates totaling over $1000 are funded through donations by friends of the gallery, campus organizations, and generous community benefactors.

The juror for this year’s exhibition is John R. Stomberg, Director of the Hood Museum of Art at Dartmouth College. Before joining Dartmouth, he served as Director of the Mount Holyoke College Art Museum; earlier in his career he held leadership positions at the Williams College Museum of Art and the Boston University Art Gallery. The primary focus of his curatorial work is American art and culture since 1900. His exhibitions are conceived to broaden understanding of how art operates in, and often shapes, society.

In conjunction with the exhibition, the gallery is excited to present a lecture by Stomberg on Thursday, February 9th titled Art and the Brain: Studio Practice and the Promise of the Liberal Arts. The lecture will be held in the Filene Recital Hall at 5:30 and, like all Schick events, is free and open to the public.