Visit Saratoga.com For Everything Saratoga
Enter Giveaways Advertise
Note: Saratoga.com is not responsible for posts and comments written by non-staff members.
Home  »  Music  »  Zeo Forever: The Den at Midnight

Ed. Note: Contributor Jonathan Albert takes off his theater hat and puts on his music critic’s today. He is eminently qualified for this as co-owner of Putnam Den (visit PutnamDen.com)

SARATOGA SPRINGS – It was as if people knew he would go on exactly at midnight. Not only did people start filing in just before 12 but the people that were here started gravitating toward the stage well before Zeo was introduced. There were 15-20 performers Saturday night, February 18, at Putnam Den and A1 Hip Hop and R&B Show, and many of them were talented young artists. But none shone so brightly as Anthony Scaringe AKA Zeo. With whispers through the crowd and rising anticipation, the 160 people at Putnam Den gravitated toward the stage moments before the introduction of the hometown favorite. They knew something special was about to happen. 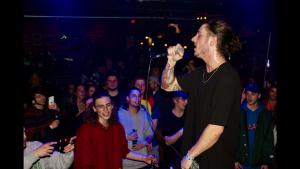 Zeo took the stage and grabbed the mic with confidence and swag. His first words, an appreciative request that everyone come a little closer-closer to the stage, closer to each other, closer to the music… just… closer.

I spoke to Anthony after the show. “I remember my first performance at Putnam Den when I was 16 years old and I had to really work to get the crowd engaging with me. Tonight I got up there and I felt like a hometown hero.” The support and love was palpable as Zeo’s lyrics fell to the audience’s ears- that he could “feel the energy… feel the vibes.” A few songs later some of his friends were on stage with him, singing, rapping, dancing, “bouncing” with their brother.

Zeo’s songs are about bringing people together, about shared experience of youth and fear, struggles and enjoyment of life. He truly speaks to his generation and his music seemed to resonate with the crowd many of whom were singing along with him and many who had never heard him before but were equally mesmerized.

I was struck by Anthony’s appreciation of the crowd. During his performance he took time between songs to thank everyone for coming out, expressing how much it meant to him. He was genuine and kind and the crowd responded to that with cheers and joy. After the show Anthony expressed more appreciation to the people who got him to where he is today. “I have to thank my friends for coming out to every show I do. They have been a huge inspiration for me- to put on a great show for them while being myself and just having fun with all of it on stage,” he said.

“But there were a lot of unfamiliar faces there as well and that was just as exciting, to perform for those people… And I can’t forget to thank my family for the love and support they’ve shown me since days of writing poems and raps in middle school in a green composition notebook.” He concluded, “If not for that, I would not take my music as seriously as I do now.” 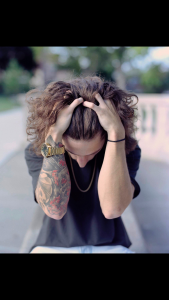 Music isn’t the only thing that Anthony is taking seriously. Last year he started his own clothing line. Right Coast Collective is a podium for creative culture- from fashion to music and everything in between. I noticed a few people donning the RCC sweatshirts and wind-breakers Saturday night and asked Anthony about this. “I love being able to wear my own brand on stage and to look out into a crowd and see more than a handful of people wearing the clothes you designed is a crazy feeling. I love it!”

His passion for is music and entrepreneurship flows out of Anthony as fluidly as his lyrics. People who are supporting RCC are part of Anthony’s larger vision, to invite people closer, closer to the stage, closer to the music, closer to “a family of sorts… a highly creative and multifaceted family that will always be there when they need something to keep them going.”

An eloquent young performer, a budding entrepreneur and a rising star, he deserves all the accolades that will inevitably come.