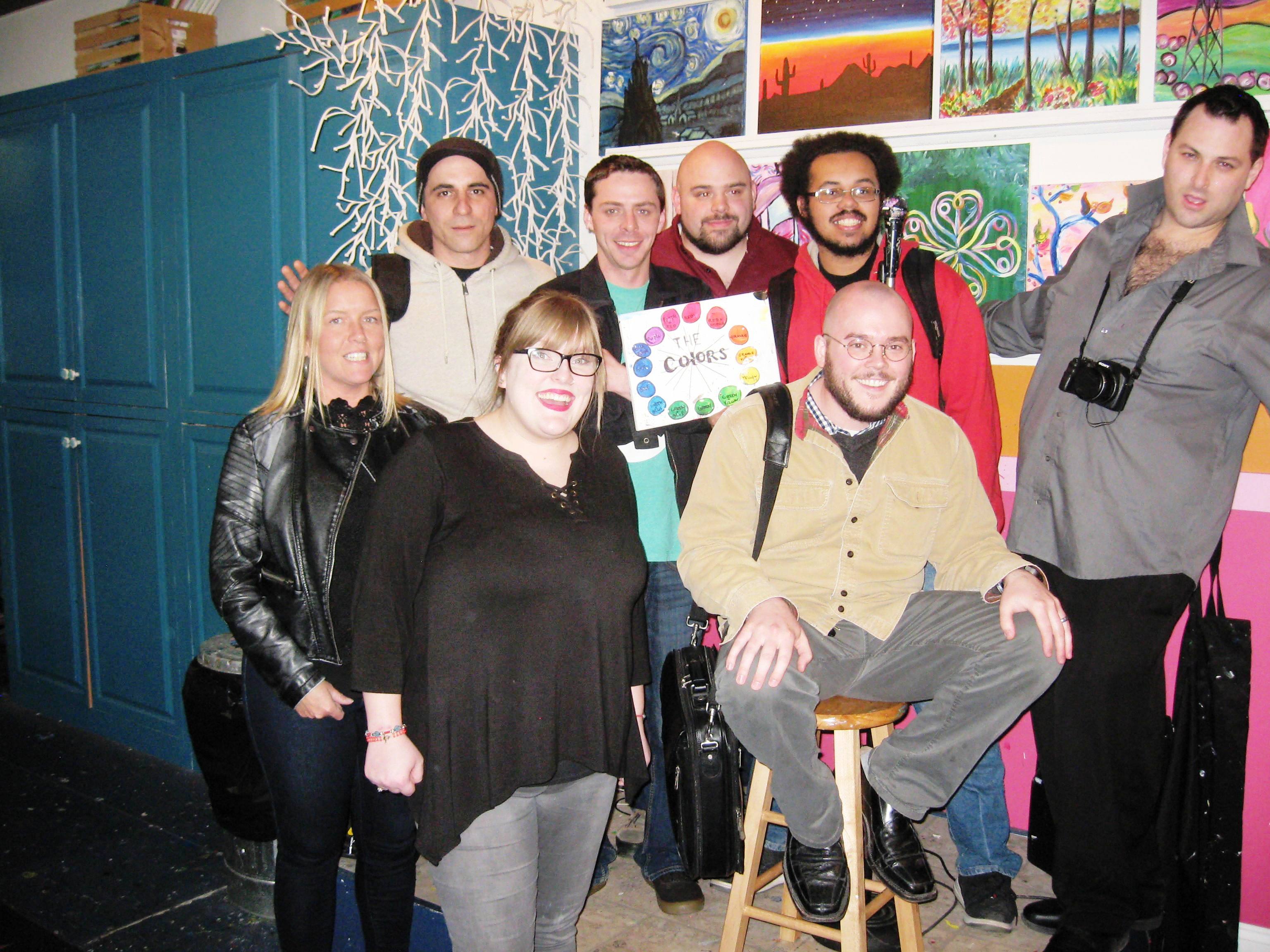 SARATOGA SPRINGS – OK Folks, we are well-past the “this could be a thing” phase. The doors have been blown off the “this is starting to become a thing” signposts too. This is a thing.

A full-blown thing. Big, bold, loud and proud – a train picking up speed and momentum. There’s still time for you all to get on board, but for goodness sakes, don’t get in it’s way!

And what is this thing?

We’ll call it pop-up laughter. Yes, comedy is cropping up all over town. All over the region, actually. The latest “outbreak” locally, if you will, occurred on Monday evening, April 3, as Saratoga Paint + Sip Studio (SP+SS -visit: their website) at 80 Henry Street put down their brushes for one night and gave you several reasons to laugh your butt off. They followed it up with Act II on Tuesday night at SP+SS’s Latham location inside Newton Plaza. Both were SRO. 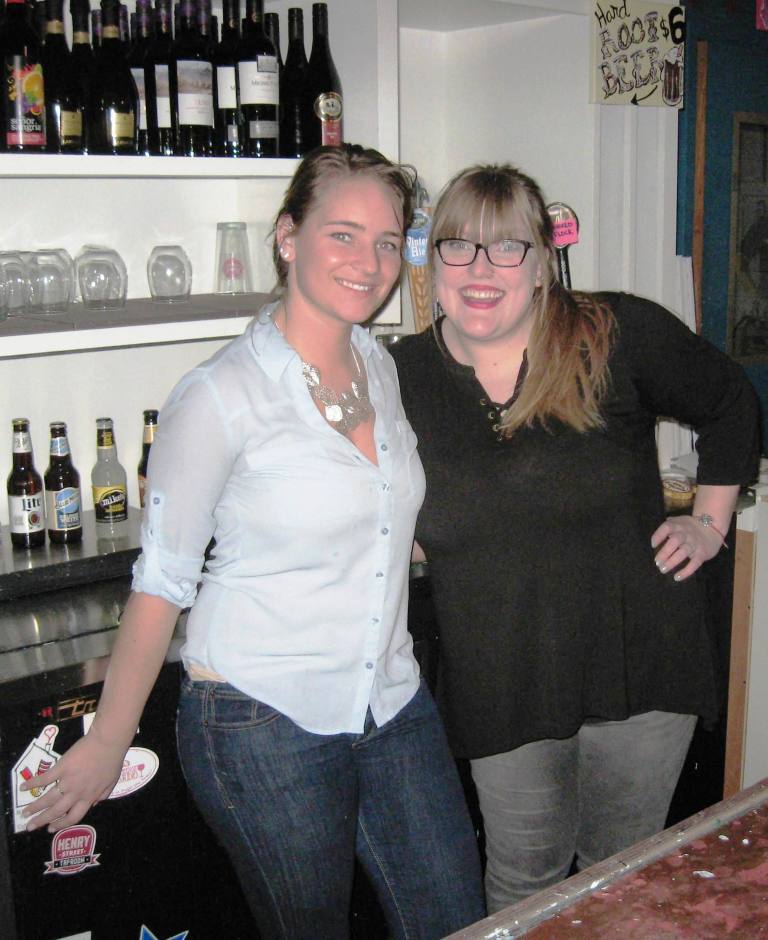 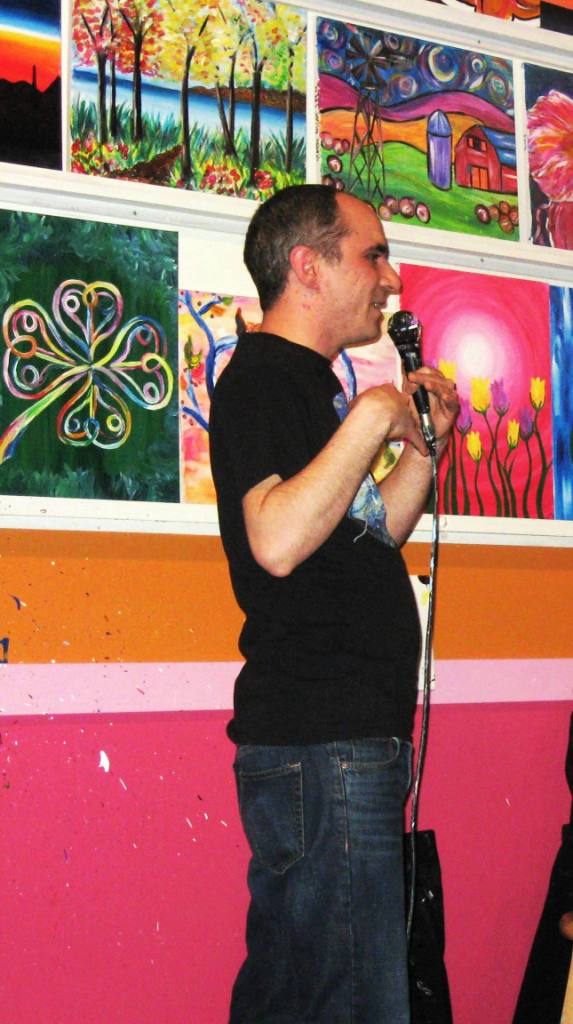 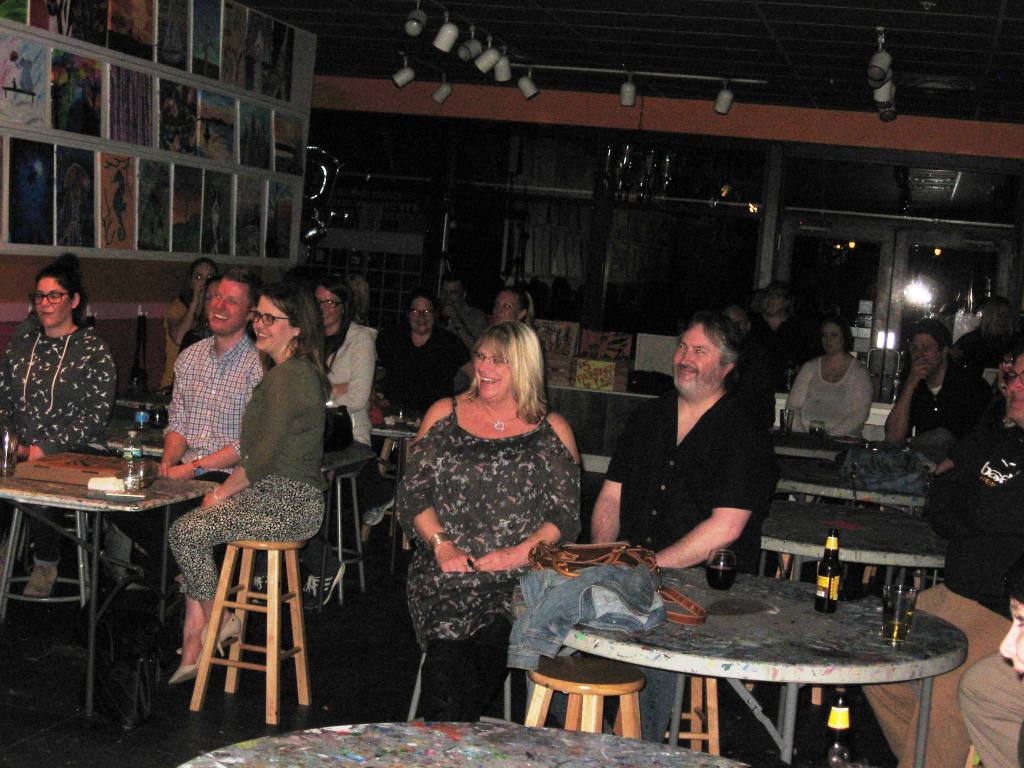 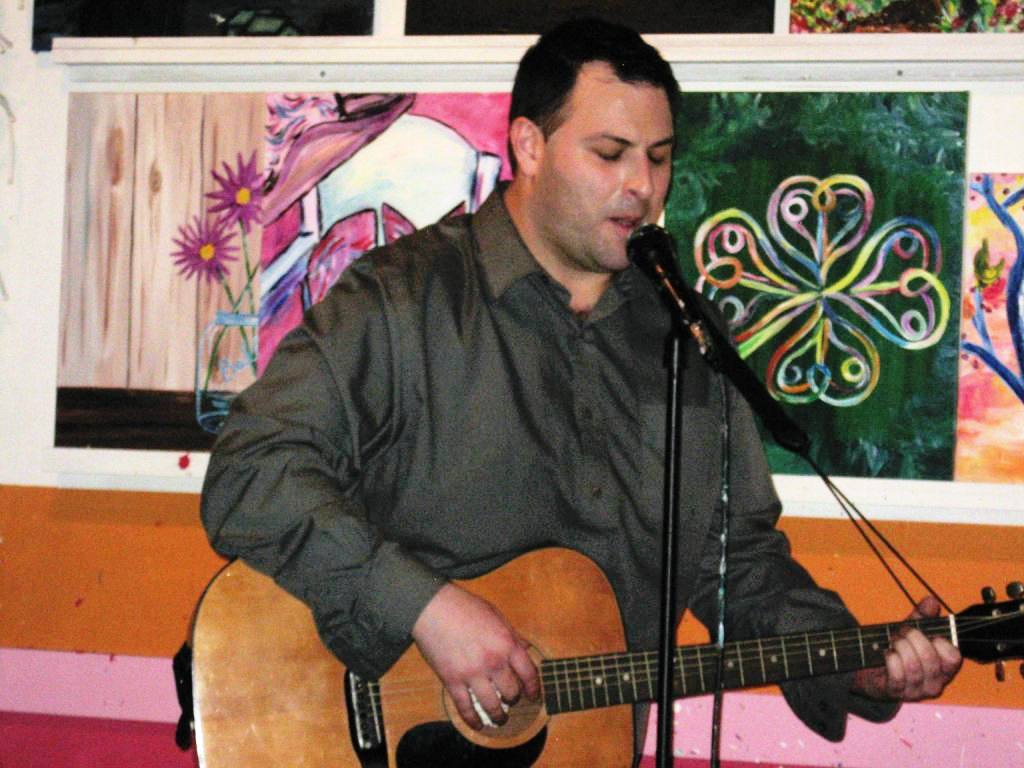 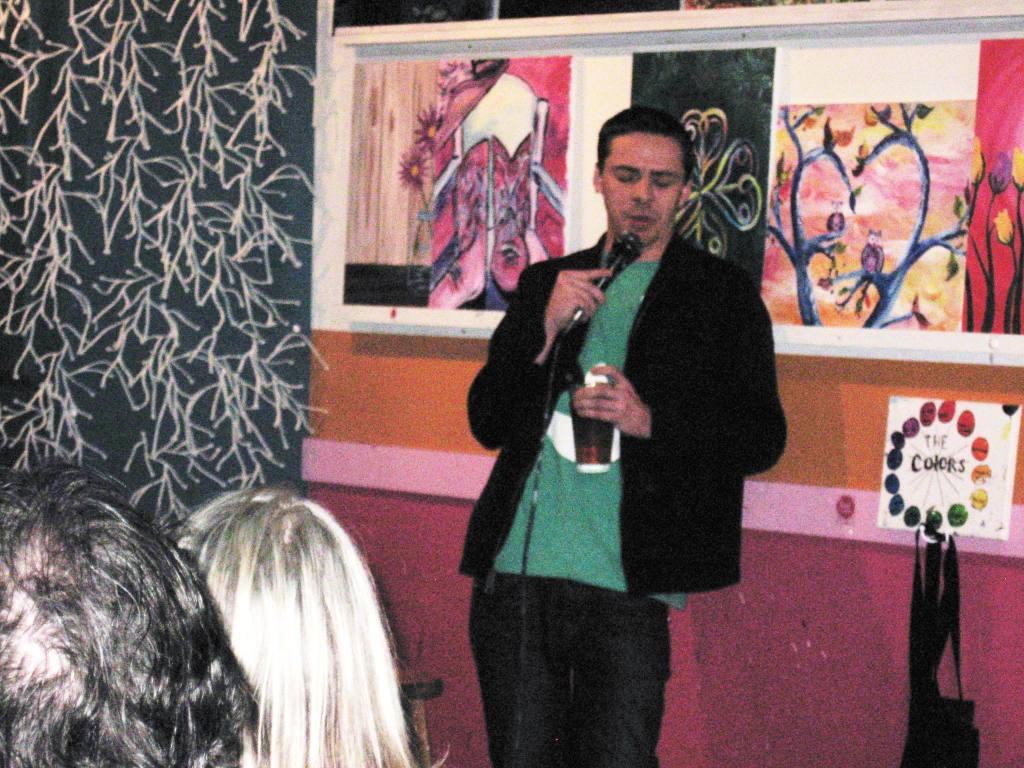 Apparently, the marketplace is responding – perhaps in response to the politico/sociological environment and related concerns (e.g.: If our leaders are a joke…) – to the “let ‘er rip” monologues that an all-star crew of comedians put forth. I’ll let the eggheads discuss this further. Suffice to say, there is a need for good, not-so-clean, All-American fun – and here it is. The talent assembled on these nights were as good as you will find anywhere, and included:
Erin Harkes,
James King,
Jim Felter,
Michael Lasch,
Mike Cahill,
Rob Rudolph,
Ryan Shanahan,
and Katherine Gauthier. 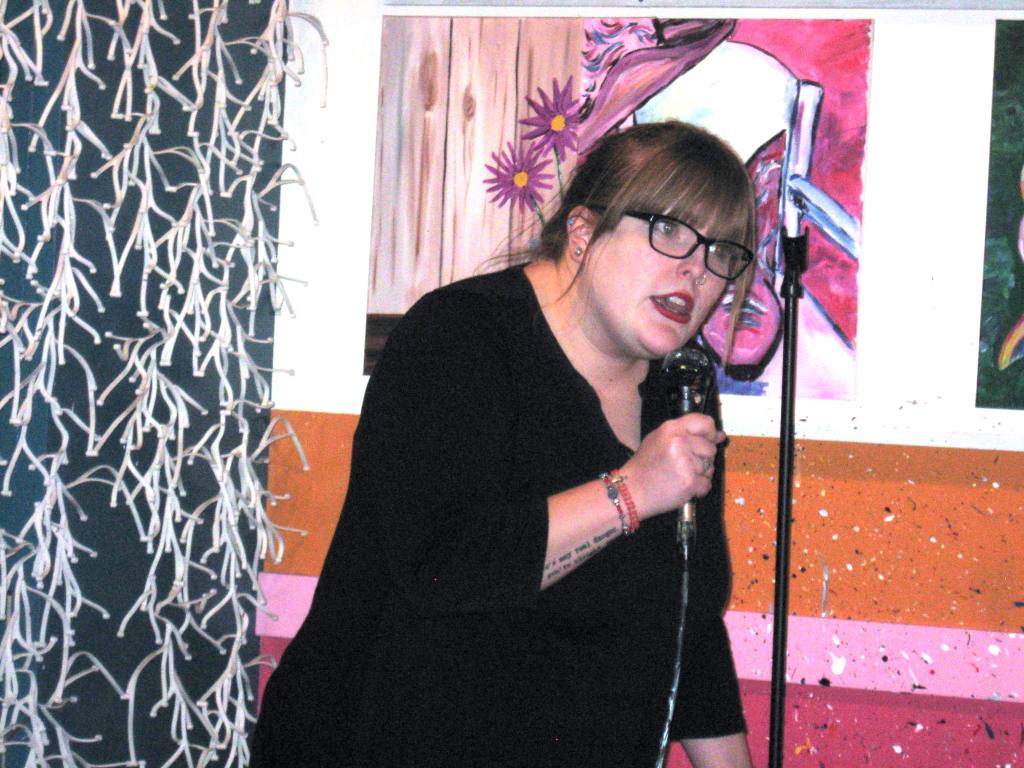 I must first observe and once again make a fuss over Ms. Gauthier’s efforts to put together shows like these at Paint + Sip and other venues… Katherine, it should be noted, has a full-boat itinerary of her own stand-up gigs, and, in addition, is a dynamite in-demand painting instructor for Paint + Sip. So she could work on promoting her career(s) and be productive and prolific. But no – she also puts on the hat of promoter – sheep-dogging a crew of individual egos into some semblance of organization. This is a task often akin to picking up the element Mercury, I assure you, but there she is: putting out Facebook posts, coddling, supporting and generally being a calm promoter when one of a million little details (that you never see) go awry – as they always seem to do… I know how hard this is, having been a music promoter myself (in that era of my life known as “insanity” -more on that below), and yet it is rare to see Katherine with anything less than a ruby-red lipsticked smile. 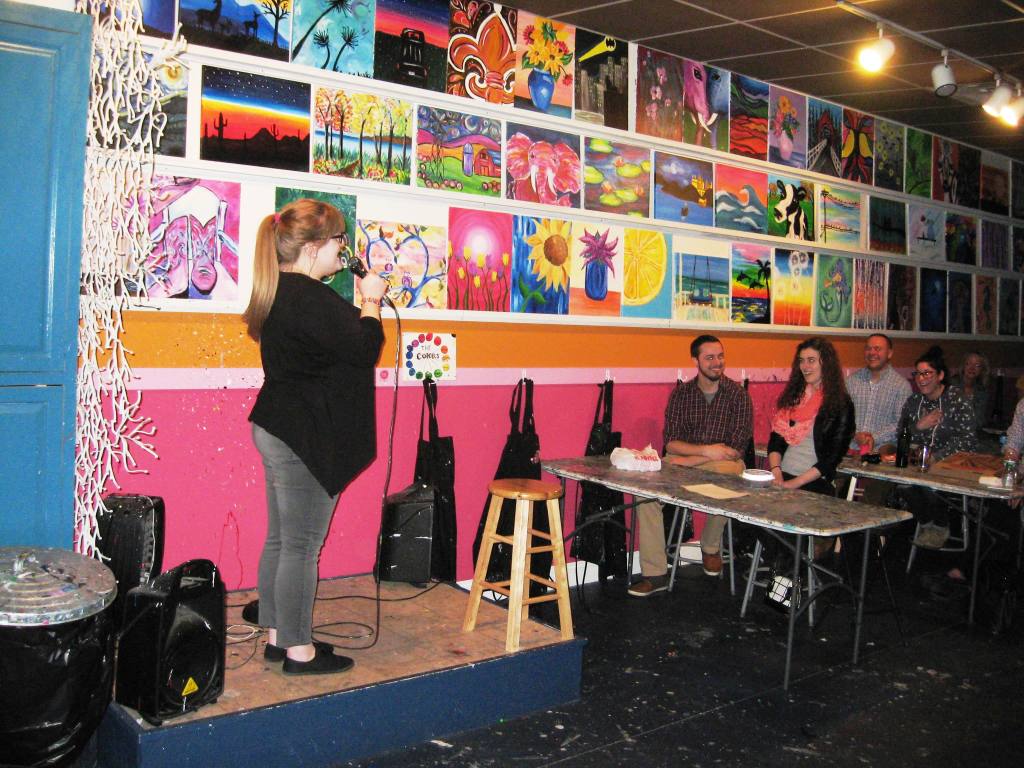 Oh, and then – she takes a turn on stage and knocks the house down! In those music promoter days, you never saw me play a set. There was a good reason for that – I sucked! But I digress… Katherine, however, does it all – and with great verve, style and panache’ – and yet, I think we are only seeing the tip of her talent. I’m going out on a limb here and saying that this is one of those rare performers in our market where you have the opportunity to brag to your friends that “I saw Katherine Gauthier when…” – so word to the wise: Look her up and support her efforts. You won’t be sorry. 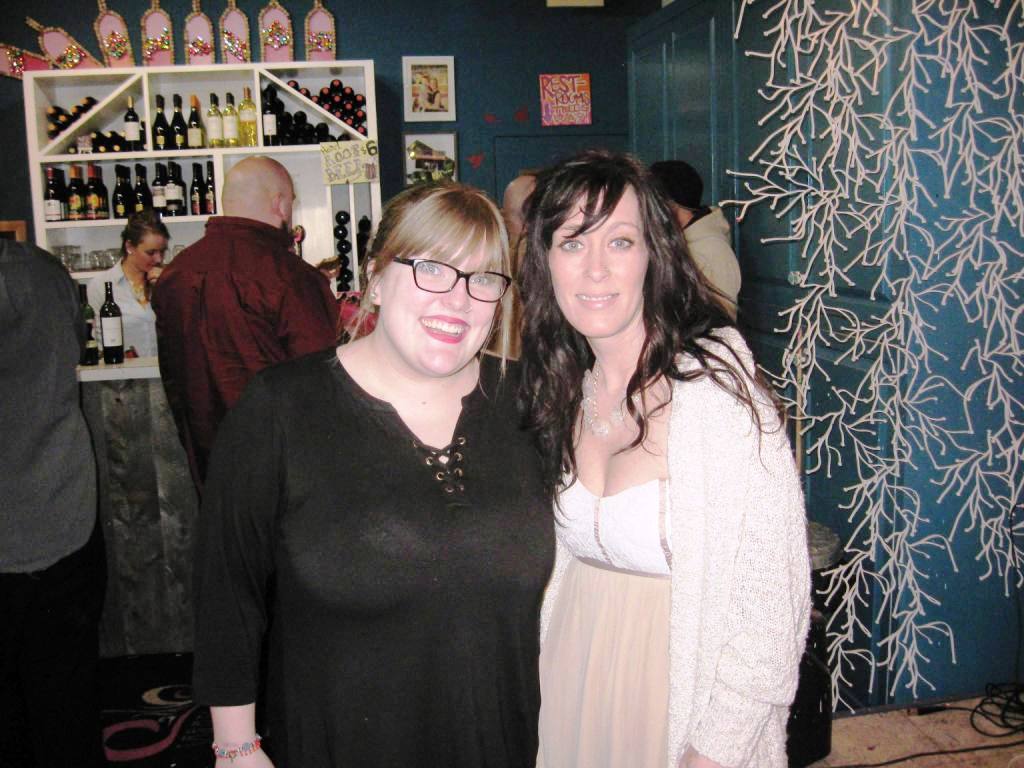 **************
Observation #2 might be less pleasant, but necessary at this juncture. Without naming names, I will note that many of these performers are doing multiple shows back-to-back at various venues that are in close proximity to each other. This in and of itself is fine, as these performers are building an audience, as is comedy in general. I am noticing many audience members are going to many shows. Again a good thing. And yet:
Q?: What is less funny than hearing a joke for the third time in a week?
A: Hearing a joke for the FOURTH time, often in the same spot in the set as the first three.

Now look, I know how hard it is to write original stuff that is entertaining. I get up before dawn each day and am greeted with a panic-inducing blank page… but I ask you: how many readers would I retain if I write the same story three times in a row?

I ask you: how many readers would I retain if I write the same story three times in a row?

Oh, and I ask you: how many readers would I retain if I write the same story three times in a row?

There’s nothing wrong with sitting out a few of these to work on some new stuff. Your fans will appreciate the effort, as will the Jimmy’s (Kimmel and Fallon). I don’t think either of them want to play sloppy seconds, at least in this case. End of mini-sermon. 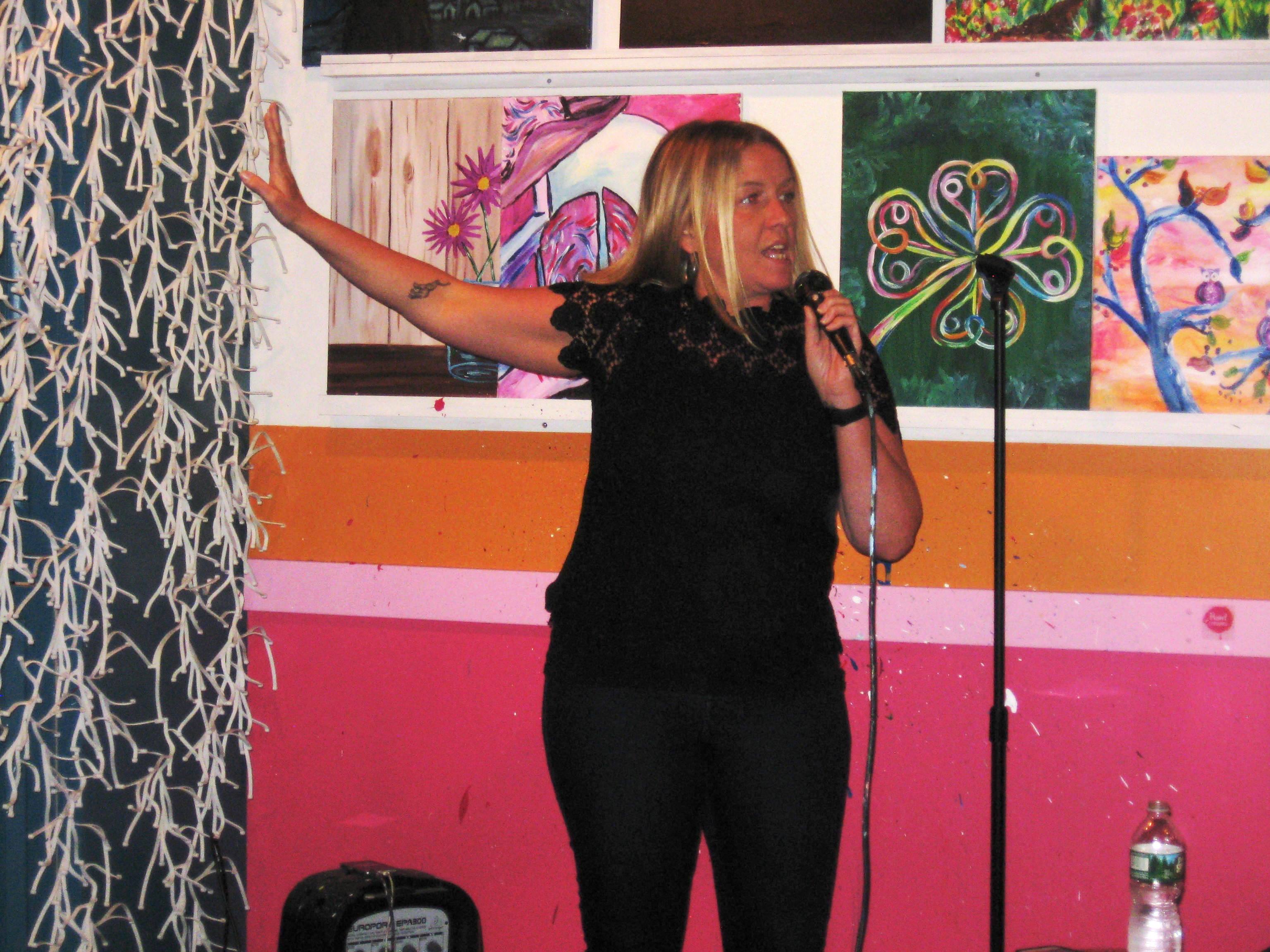 Speaking of Mr. Fallon, what a pleasant surprise it was to see Erin Harkes as headliner on Monday. Erin has already earned the Late Night with Jimmy Fallon merit badge, as well as performing appearances at leading stand-up meccas like the Gotham Comedy Club. I am very proud of her and her accomplishments, and proud also that I brought her into this zip code as a musician, where she is equally, if not more adept.

Long before she garnered multiple Metroland and Times-Union Performer of the Year awards, I found Erin doing a set at one of many benefits that she lent her talent to, on Lark Street in Albany. It was a no-brainer, for she was and is a FIERCE attention-getting standout.

From a promoter’s standpoint, she always made me look like a smart talent scout, but it goes further. Erin was a pro from day one. I never had to worry about her showing up on time, or that something personal might derail her from her best performance. Erin always came in hot: throwing her best fastball after fastball – daring you to hit it. And you couldn’t. But you could appreciate the power, the strength and the emotion that she delivers to this day.

Further still: She was one of a few performers who the staff asked for, particularly at Gaffney’s, where if they hadn’t seen her in a few weeks, asked when she was coming next. These periods would not happen often, for in addition to excellence, Erin displayed versatility. I could book her as a 4-piece band when needed, or in a duo, or just herself – on weekends, or in my Thursday songwriter showcase, which had visitors from big markets around the nation and Europe.

She’s one of the reasons I say that our songwriter colony takes a backseat to no-one! Not NYC, LA or Nashville. 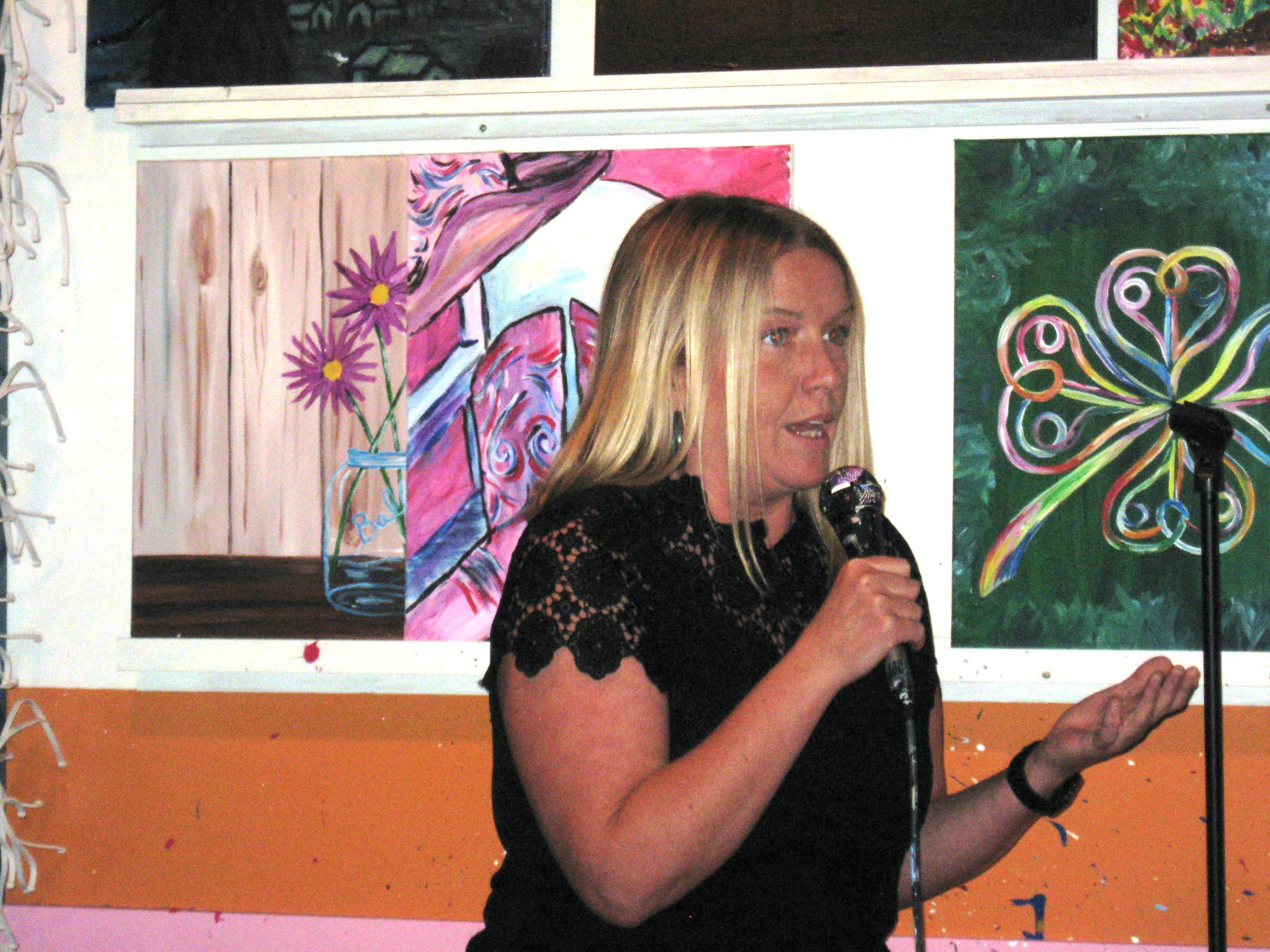 Oh, and she’s funny as crap, too. Let’s face it – she’s the epitome of the word “Headliner” – on anything she decides to do.

The only question is what comes next for Erin Harkes? I could definitely see her as the host of an old-style TV variety show (think Smothers Brothers or maybe Dean Martin – sans cocktails these days). Yeah, that would work.

Unless she wants to try brain surgery… start dusting off the Nobel Prize, she might still have room on her mantle for that one. 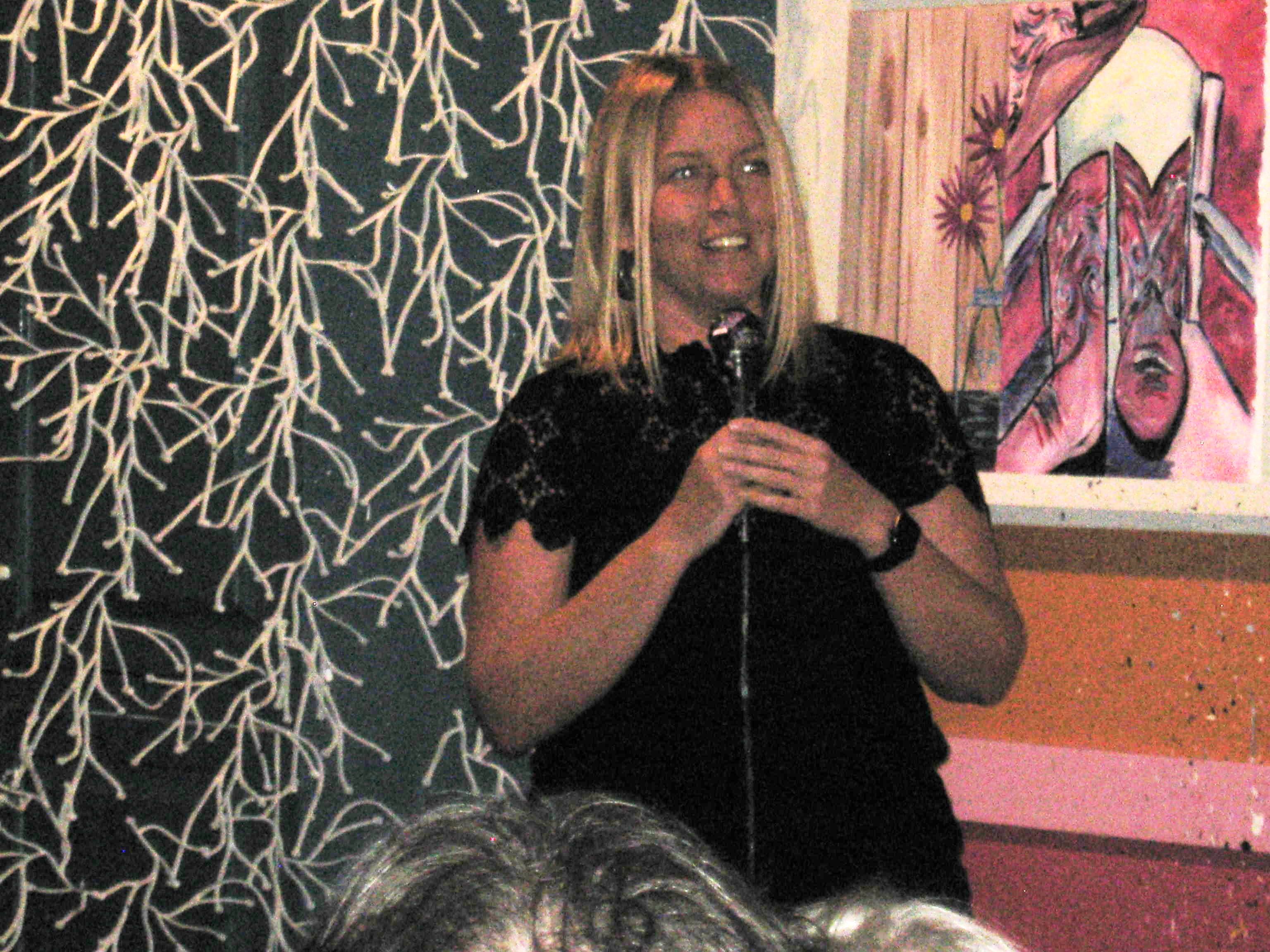