Tickets On Sale Monday at 10 am 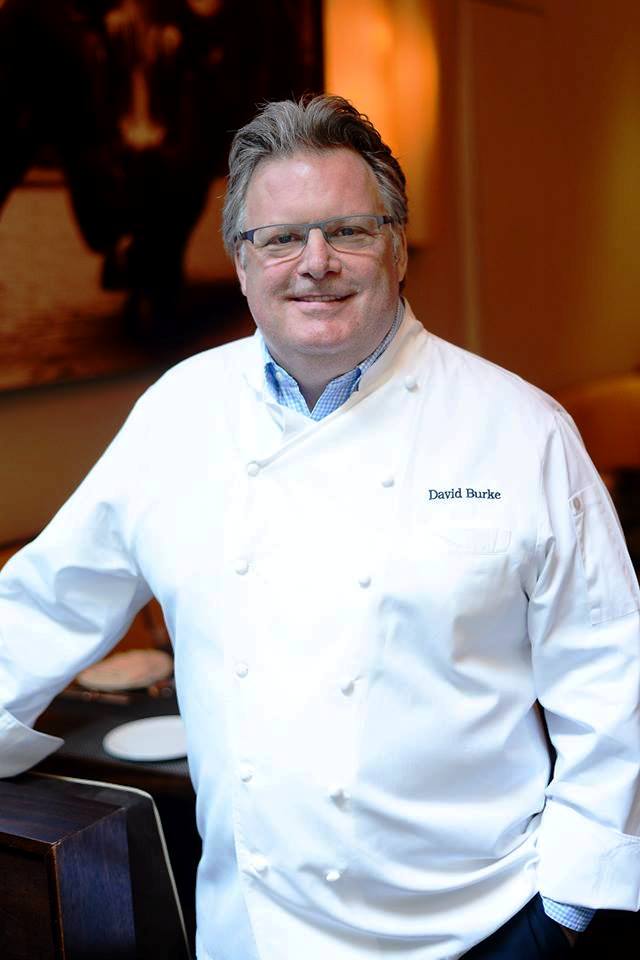 David Burke, known for his role on the Food Network’s Iron Chef and Bravo’s Top Chef Masters and as a fixture on the national restaurant scene for decades, will be a featured celebrity chef at the festival. In addition to his restaurants in Manhattan, Chicago and Las Vegas, Burke is also the new Culinary Director of The Adelphi Hotel and Salt + Char in Saratoga Springs. Burke will kick of the weekend by participating in the Fired Up! competition as the lead judge. He will also prepare dishes from his restaurants Tavern62, David Burke Kitchen, and Woodpecker by David Burke, at the Saturday Grand Tasting event. In addition, he will compete in the festival’s own Iron Chef-styled cooking competition to take place on stage Saturday afternoon. 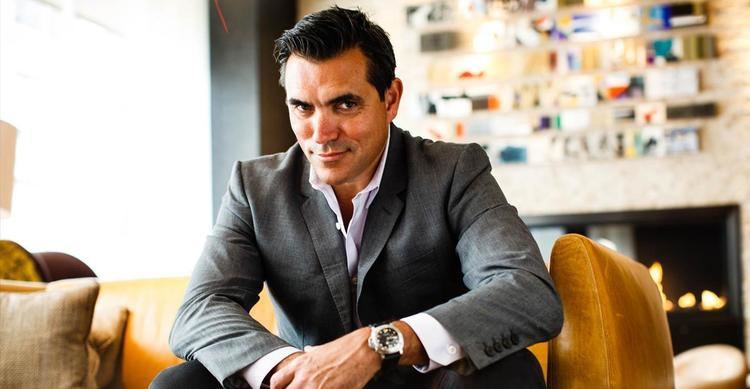 Considered one of the most decorated chefs in the world, Todd English is known for his international travel and cooking series, Food Trip with Todd English, which garnered him two James Beard Awards as well as an Emmy nomination; national public television series’ Cooking Under Fire, and The Food Network’s Opening Soon. English will co-host an energetic Sunday brunch alongside Colin Cowie, following his appearances at The Super Bowl, Sundance Film Festival, Fashion Week, The Tony Awards, NASCAR, and Dinner In White, among many others.

The 2018 Saratoga Wine and Food Festival will be highlighted by the once-in-a-lifetime opportunity to experience the International Bugatti Tour in partnership with the Saratoga Automobile Museum. A convergence of 160 drivers and 80 luxury Bugatti automobiles, the rally comes to the United States only once every ten years and will make its first visit to New York State this September. Descending on the Saratoga Spa State Park’s reflecting pool for a “Bugatti Ballet” auto display, the tour will showcase one of only two Atlantic 57SC’s in existence, valued at over $42 million.

This year’s festival, expanded with the recently announced partnership with Colin Cowie Lifestyle and the Saratoga Automobile Museum, is an annual tradition drawing in food and wine enthusiasts from across the region. In addition to stunning automobile displays coming in from every corner of the globe, the 2018 festival will feature fine wine and gourmet food tastings, luxury car displays, VIP experiences and a lively Sunday Brunch. Held in the beautiful Saratoga Spa State Park, the weekend is presented in partnership with the Saratoga Automobile Museum, proceeds from the festival benefit education programming at SPAC and the Museum.

This spirited road rally is a professionally led tour winding through the beautiful Adirondack Mountain roads to finish at the historic Lake George Club. Named “The Queen of American Lakes” by none other than Ben Franklin, the surrounding area is stunning with twisty roads, full of elevation changes and scenic views. Gourmet lunch includes quality wines, imported fine foods and good company with fellow automotive enthusiasts.
Event price: $100
—————– 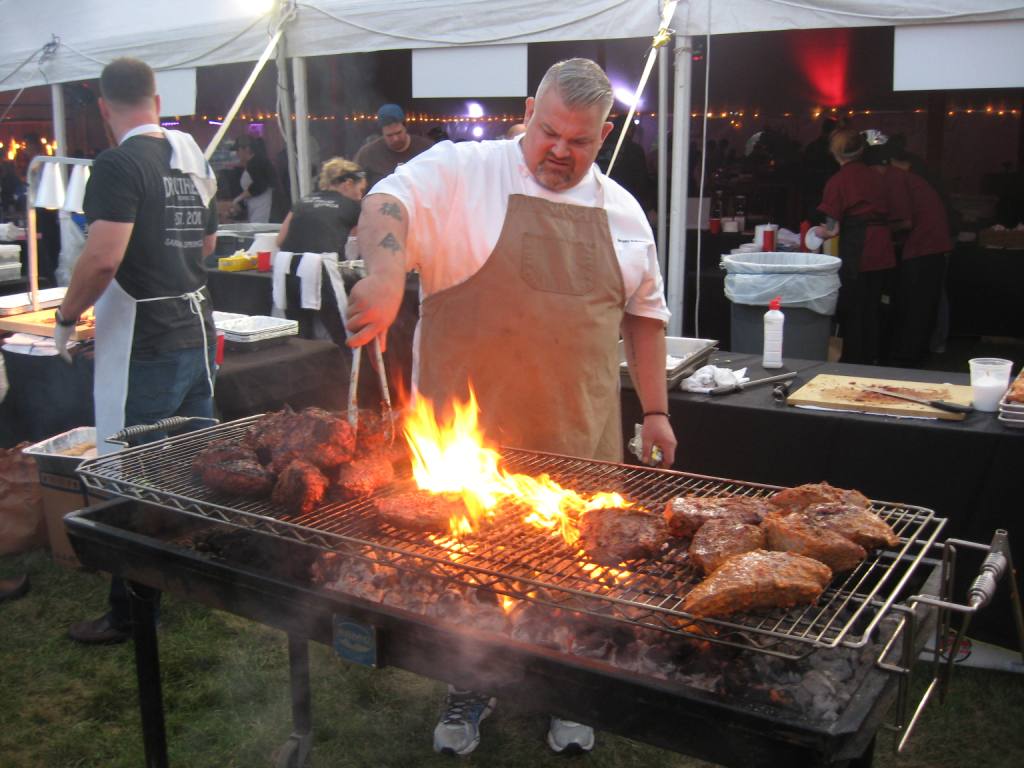 At Fired Up! Grill Competition, the kick-off event to the weekend’s events at SPAC, chefs from the Capital Region’s finest restaurants will battle it out for the Fired Up! title as guests enjoy great music, gourmet food, BBQ, a cold refreshing Stella Artois, wines and spirits. 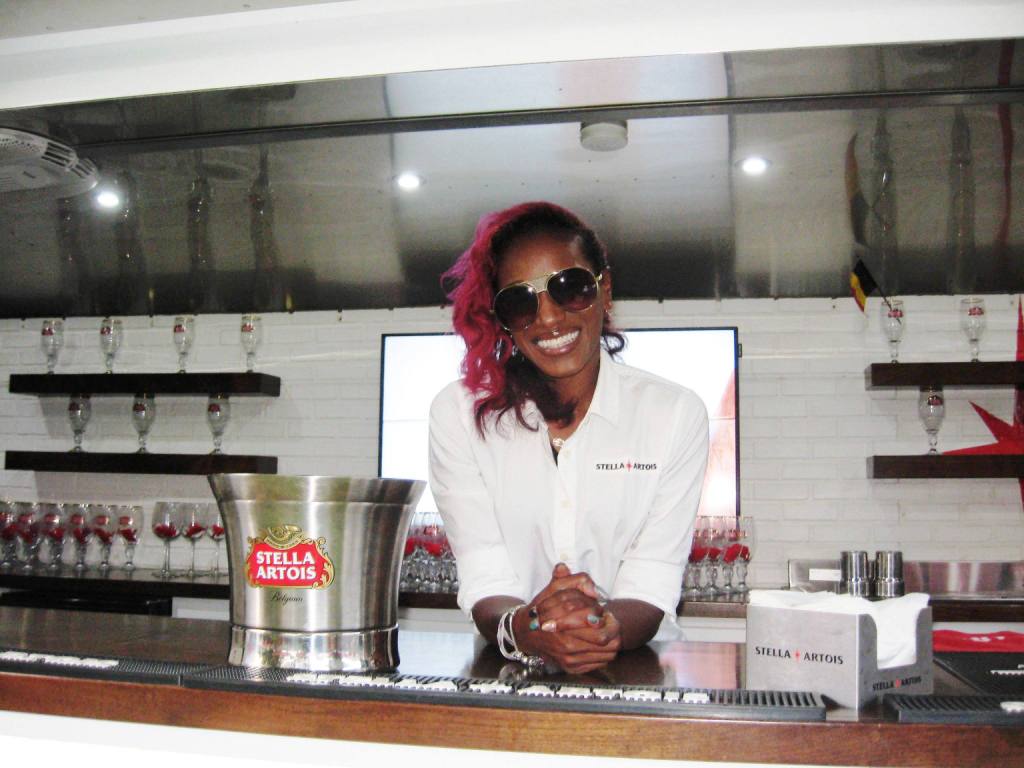 Guests will help celebrity judge David Burke, along with 3 more celebrity judges (to be named at a later date), to name the 2018 Saratoga Grill Master by sampling inventive grill-off creations. David Ortiz will also make a special guest appearance at the event.
Event price: $100 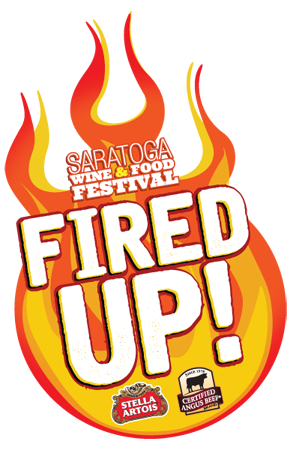 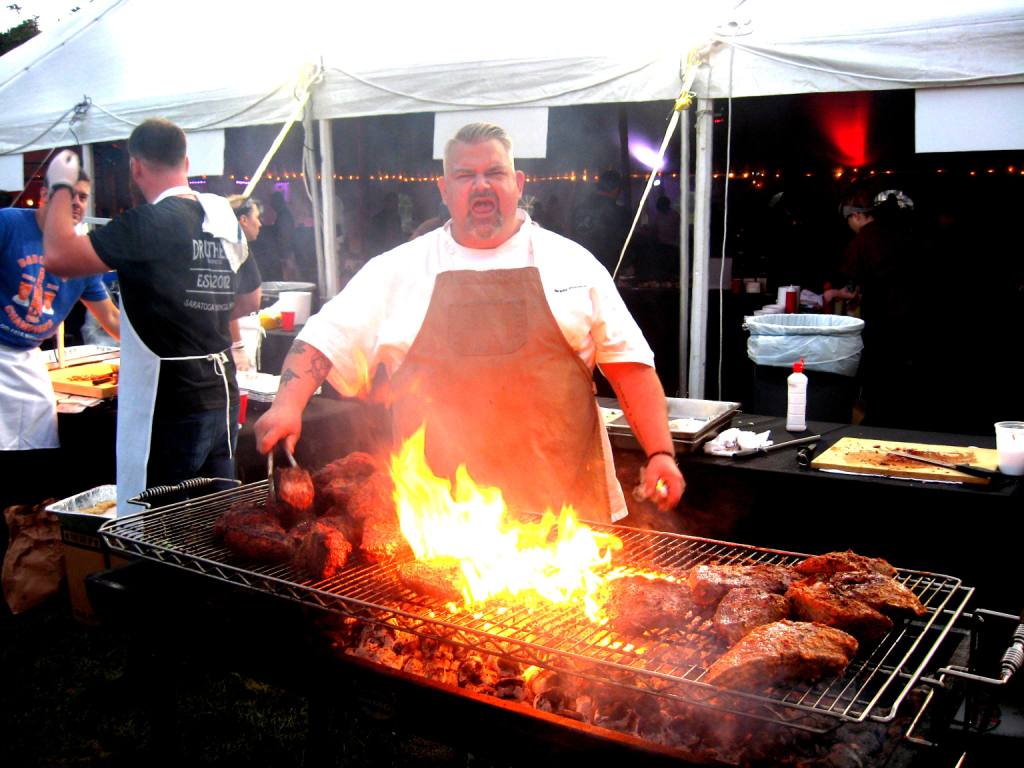 —————————
David Ortiz Meet and Greet | 7 – 7:50 p.m.
During the Friday night event, David Ortiz will host a meet and greet for 100 people who will have their pictures taken individually with the baseball hero and receive a signed promotional photograph. This opportunity will be available to the first 100 people who purchase a specially priced Fired Up! ticket at $150. A portion of the proceeds from the event will benefit the David Ortiz Children’s Fund, a charity which funds pediatric services for children in New England and the Dominican Republic.
Event price: $150

Party with Big Papi in VIP Nightclub| 8:30 – 10 p.m.
Following the private meet and greet, David Ortiz will host a VIP experience in the VIP Nightclub, overlooking the Spa State Park reflecting pool from 8:30 p.m. to 10 p.m. The event will feature an opportunity to mingle with the baseball legend and other guests while enjoying Arias wines and gourmet hors d’oeuvres. All of the guests will receive an autographed bottle of Arias. Event price: $200
————————–
SATURDAY, SEPT. 8
The Grand Tasting | Saturday, Sept 8, noon – 4 p.m. 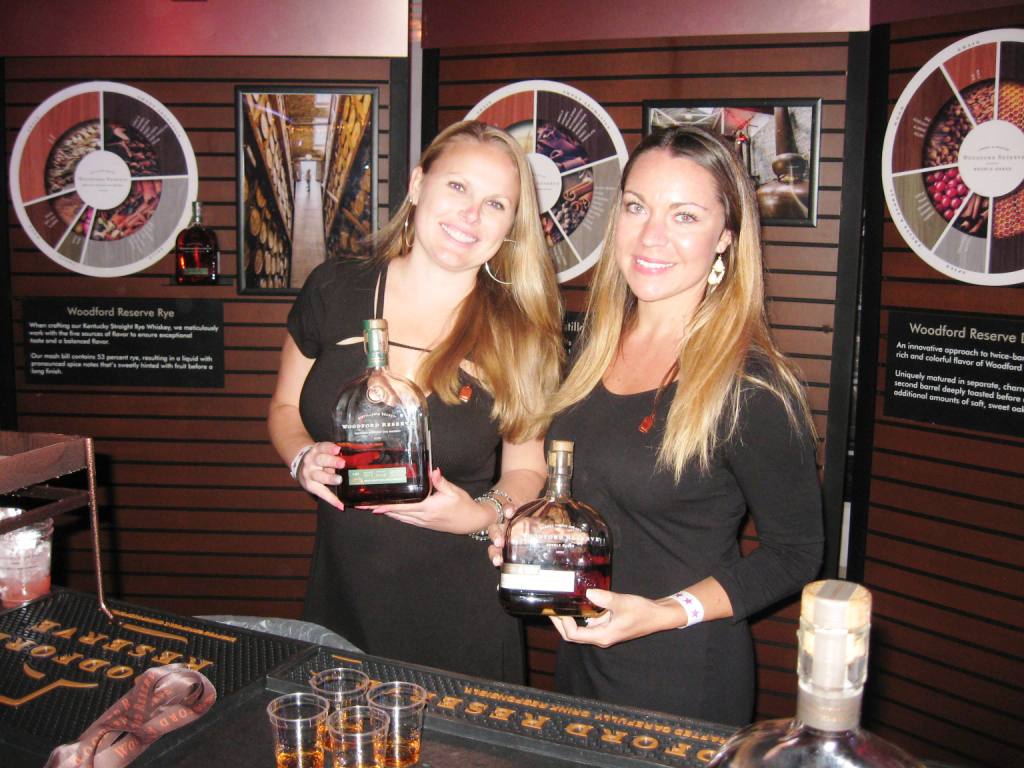 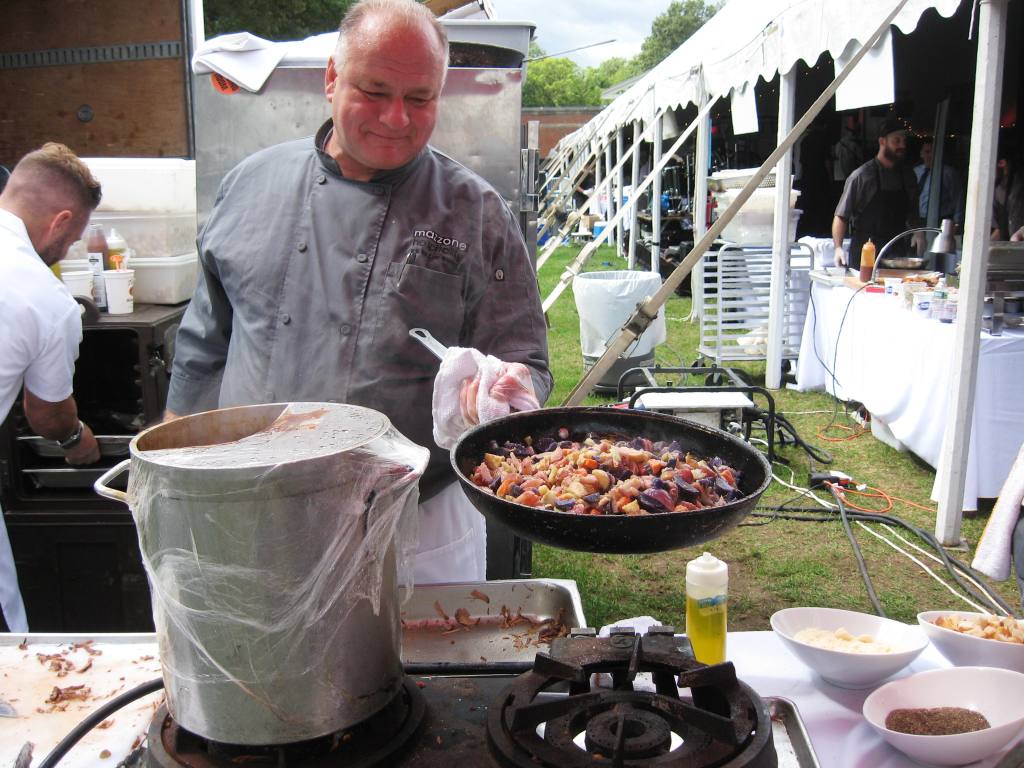 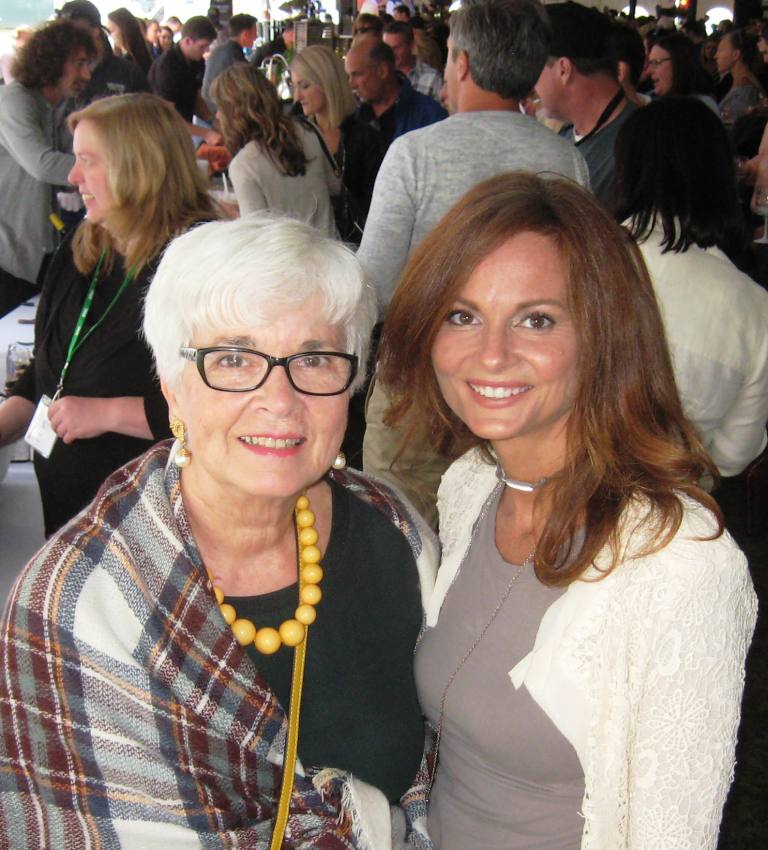 Saturday will showcase the festival’s elegance through an exclusive Bugatti auto display, curated food, wine, events and activities. Guests will have the chance to taste New York’s finest creations and VIP guests can enhance their sommelier skills in the VIP lounge.


The main stage will host speeches, special guest appearances, live music and an “Iron Chef”-styled competition featuring James Beard Award-winning chef, David Burke. Burke will have a presence with a taste of dishes from Tavern62, David Burke Kitchen, and Woodpecker by David Burke.
Cost to attend the Grand Tasting is $100.
*** A VIP Grand Tasting ticket, which allows earlier entry to the Grand Tasting and exclusive access to the VIP area, is available for $175. *** 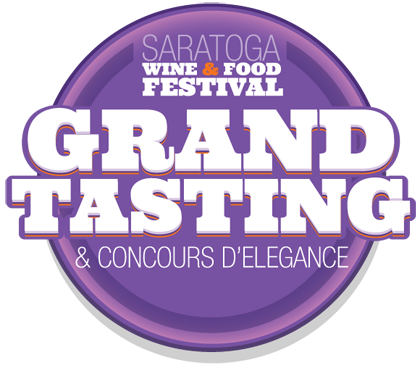 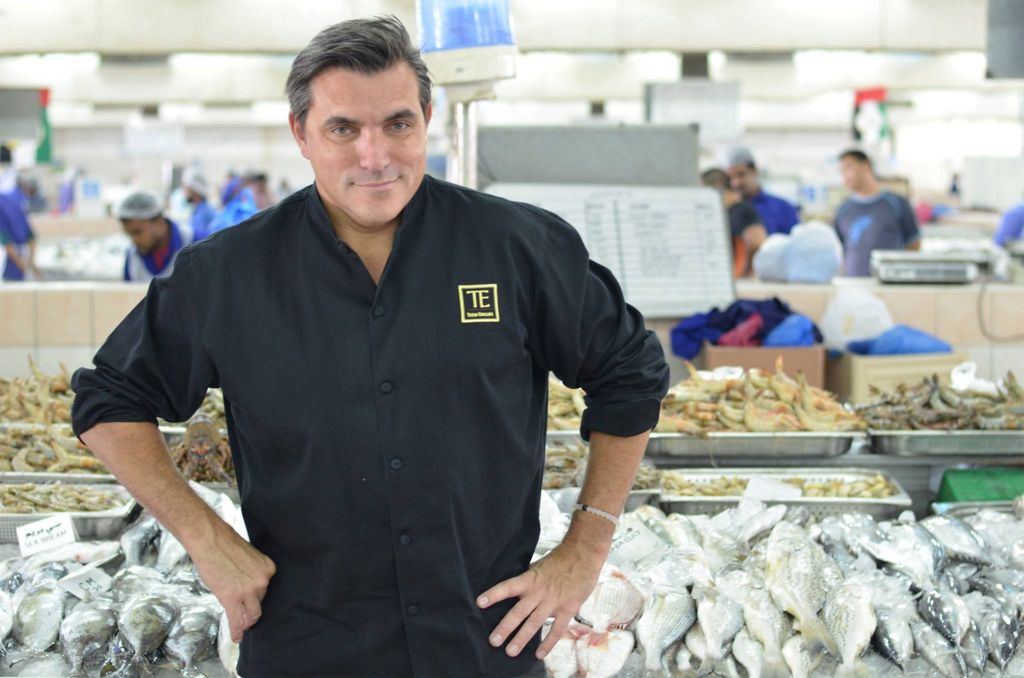 Chef Todd English and Colin Cowie will co-host a lively, upbeat brunch showcasing Colin’s “five-senses” approach to events including: custom scent consultations, floral and table design examples, lively music by On The Move, and a phenomenal menu with delectable bites and cocktails. A never ending supply of Whispering Angel Rose with specialty cocktails by the Cocktail Architect, Yusef Austin, will be featured for this daytime party with a nighttime vibe.
Event price: $225

The Saratoga Wine and Food Festival is Saratoga Performing Arts Center’s primary fundraiser for its educational programming, including Classical Kids, a collaborative program in which SPAC works with local schools to teach elementary and middle school-aged children about the classical performing arts. SPAC both designs and teaches dance and music curriculums that educate young students about the world-class performances presented at SPAC. Following classroom studies, SPAC hosts students at a summertime performance of the work that they studied. Graduates of Classical Kids receive two free tickets to a SPAC classical performance annually until they graduate from high school.

Tickets to the events will be on sale beginning on Monday, July 9 at 10 a.m. For more information about the festival, visit spac.org.