Visit Saratoga.com For Everything Saratoga
Enter Giveaways Advertise
Note: Saratoga.com is not responsible for posts and comments written by non-staff members.
Home  »  film  »  Standing O’s and Awards for ‘Skateboard Charlie’

SARATOGA SPRINGS – Strap yourself in folks. You are about to read a great story to begin the New Year! 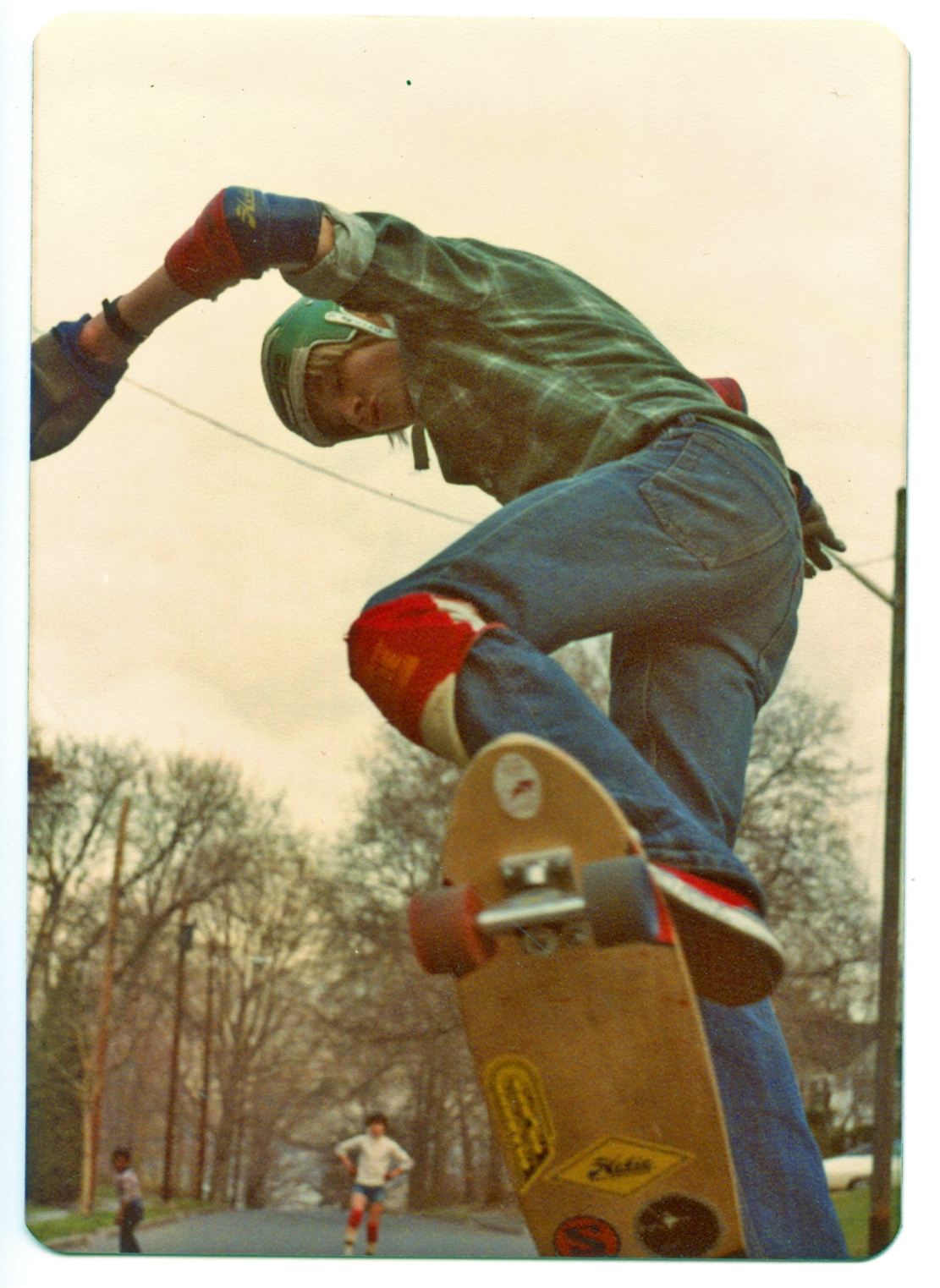 And actually, this story has been brewing for some time. Each time I start out to write it, they win another film festival award – from France, to Italy, California and Florida. And Mystic, CT and Spain, as well as Chatham and Yonkers in New York State. The short course is that Saratoga Springs resident and skateboard advocate Charlie Samuels, has been garnering worldwide accolades and hardware for his retrospective documentary “Virgin Blacktop: A New York Skate Odyssey.” 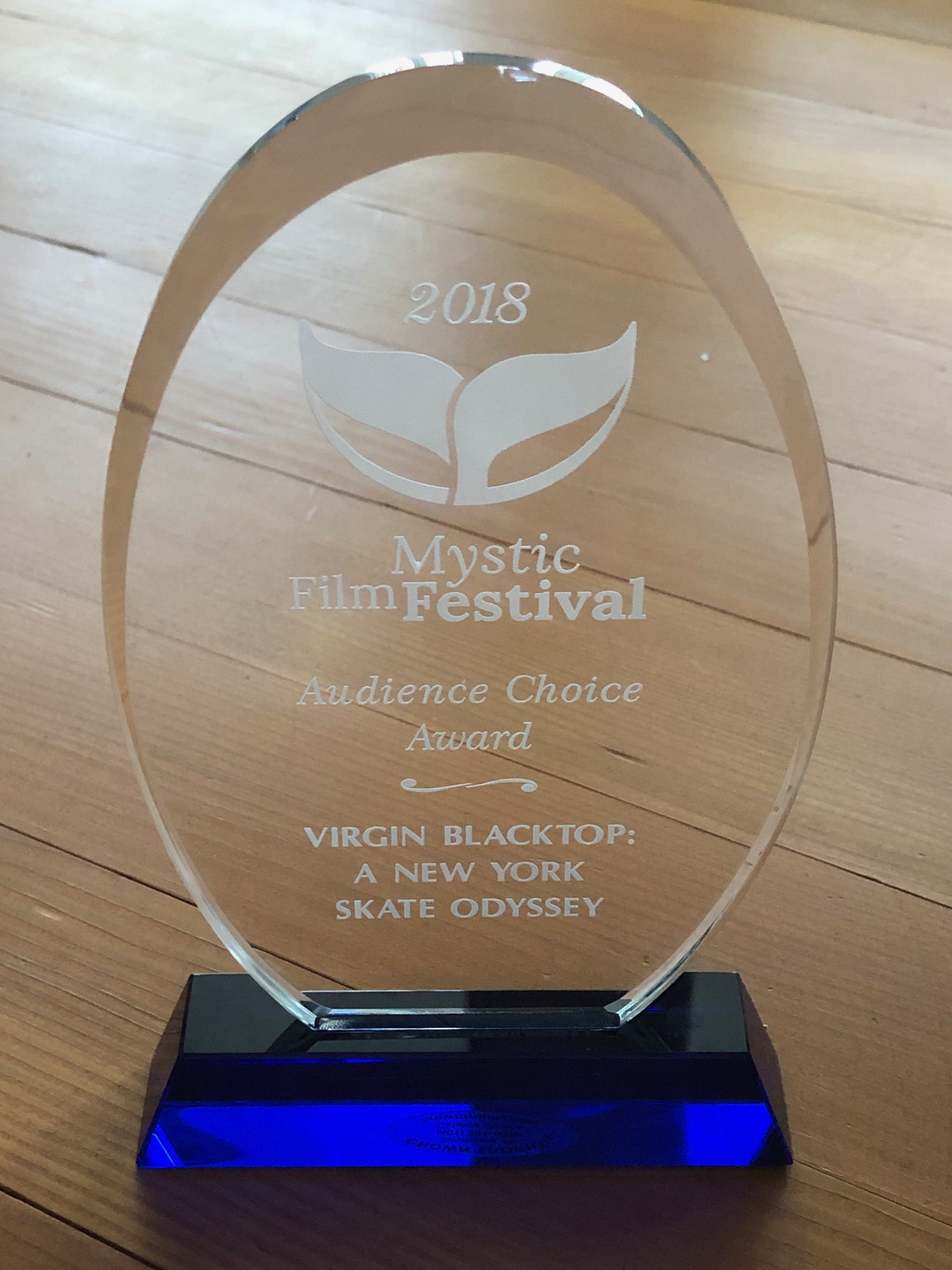 The documentary is an uplifting and sometimes heart-breaking coming-of-age story about a super funky crew of suburban New York City kids. When they met in 1977, they had nothing in common except a passion for skateboarding. “This was before the Internet,” Charlie says, “We didn’t know from the X-games, or anything outside our world. We thought we were unique, but based on the response, its obvious that we have hit upon something that resonates with many.”

This trailer goes a long way towards telling the tale:

Despite their vastly different ages, races and economic backgrounds and with their parents’ hands off approach, they formed a competitive, traveling team of spirited skateboarding outsiders called the “Wizards”. Now, nearly 40 years later, they remain friends but their lives have followed very different paths, from board rooms to jail cells.

Anyone who grew up in the 70s, or is a fan of that era’s music, will love the soundtrack – featuring funk classics like “Back in love Again” from LTD and “Strawberry Letter #23” from the Brothers Johnson, among others.

Charlie, a professional photographer, has spent 24 years hunting down Super 8 footage in dusty attics, re-formatting and editing, taking time out to get married (“skateboarding on my hands down the aisle, of course”,) and traveling the country, catching up and interviewing his Wizard compatriots. One scene was shot locally (the introduction on the trailer shows Charlie in his Regent Street studio, and some transition shots were done on Spring Street.) The process was not what you would call seamless….

“I ran into an ‘insurmountable’ problem, oh, every two weeks or so.” Charlie said, laughing, when we met for coffee before the Holidays. But he persevered, and finally Virgin Blacktop made its World Premiere in San Luis Obisbo, CA, this past March (after a sneak peek in Paris, France.) “The reaction from audiences exceeded my high expectations,” Charlie said, “I attribute it to people relating to creating their own community.”

This past November, his hometown community of Rockland County, NY put Charlie and the Wizards on their local newspaper’s front page… 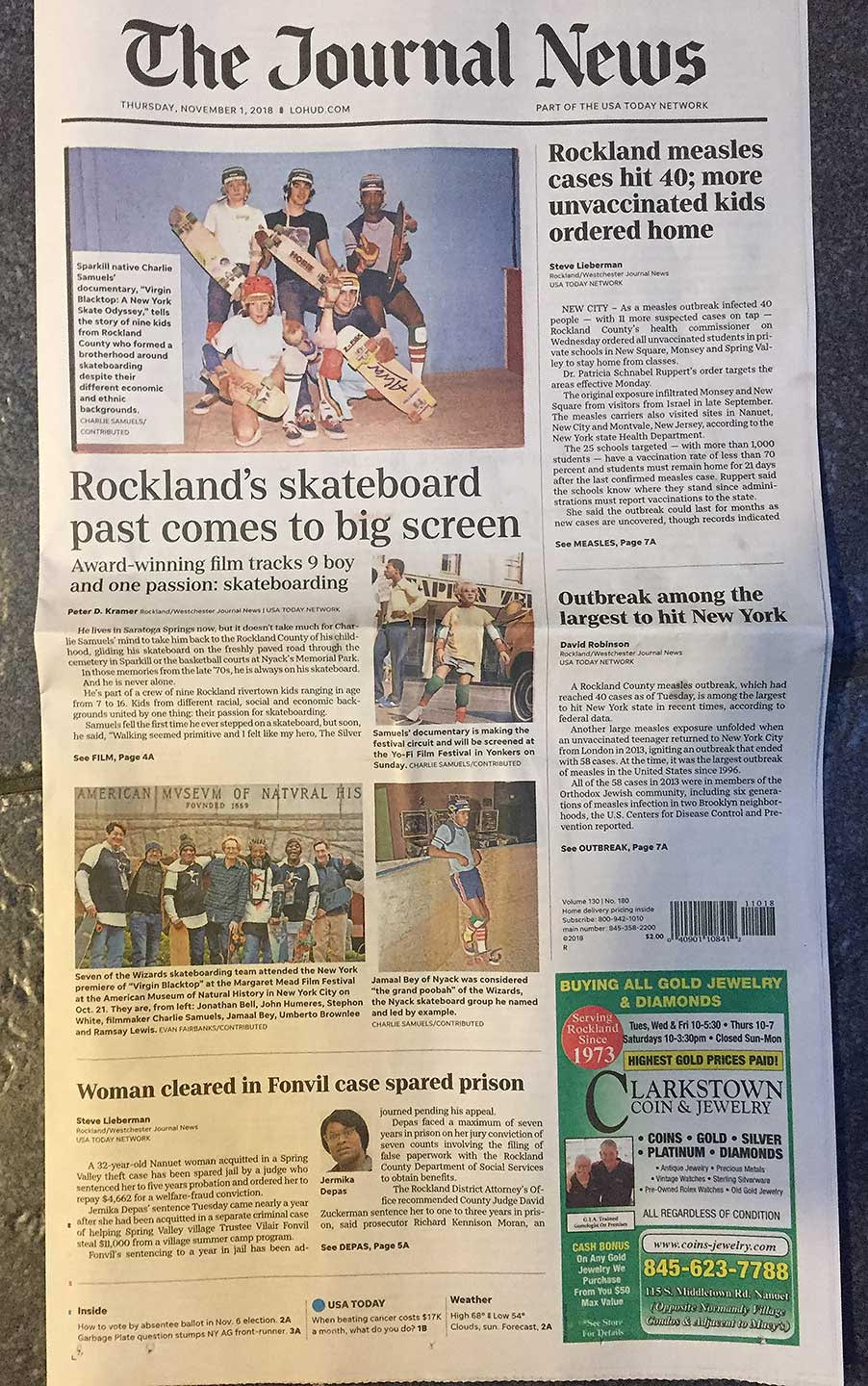 Meanwhile, the awards and hardware kept coming in… 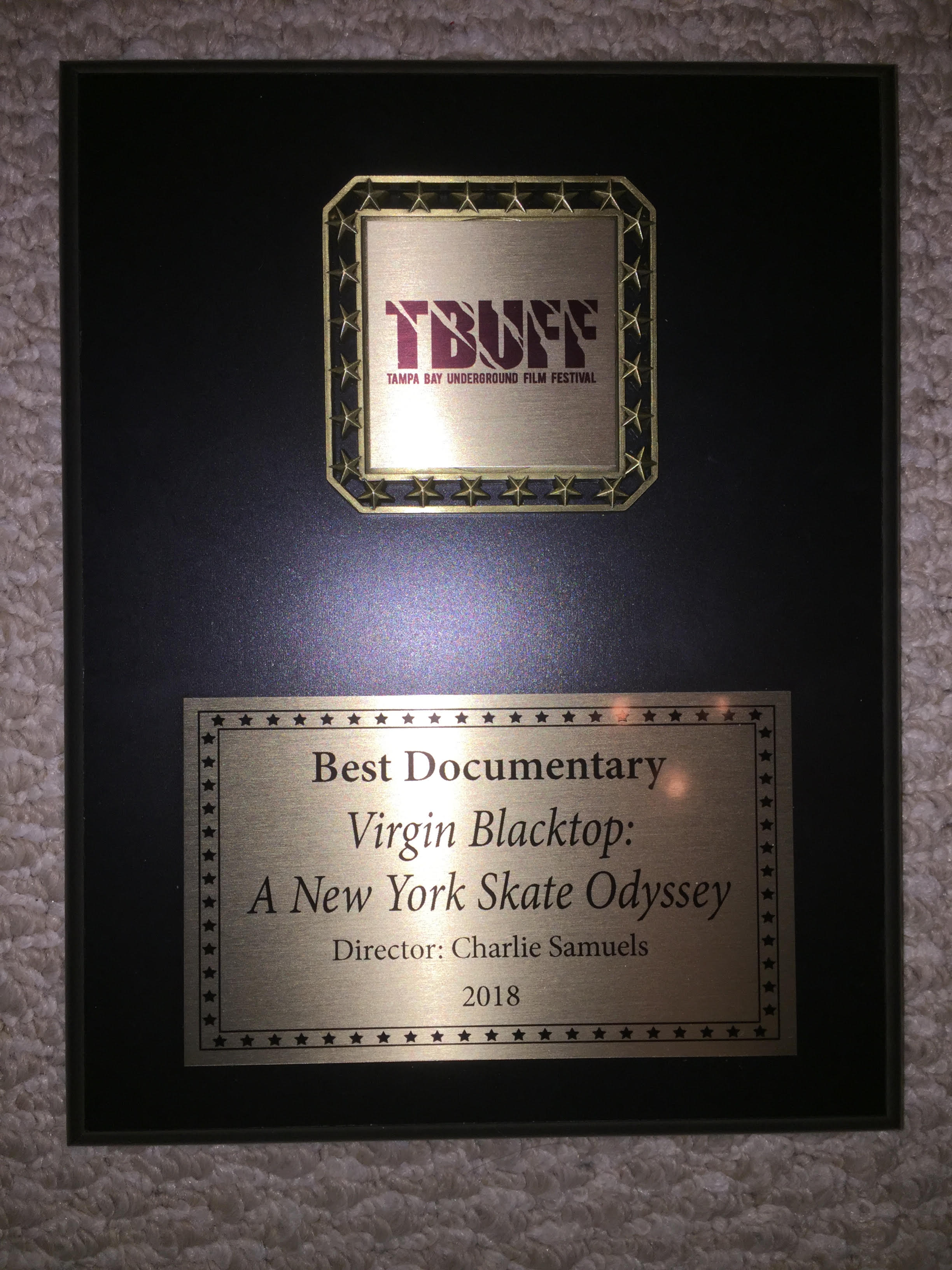 The next stop on the Festival parade for Virgin Blacktop will be in Dunedin, FL for the Dunedin International Film Festival, on January 12 and 13. Part of the reason why filmmakers go to these things is to network, with the hope of finding mass theater distribution.

Which raises the question: When will we see Virgin Blacktop at our local Bowtie? 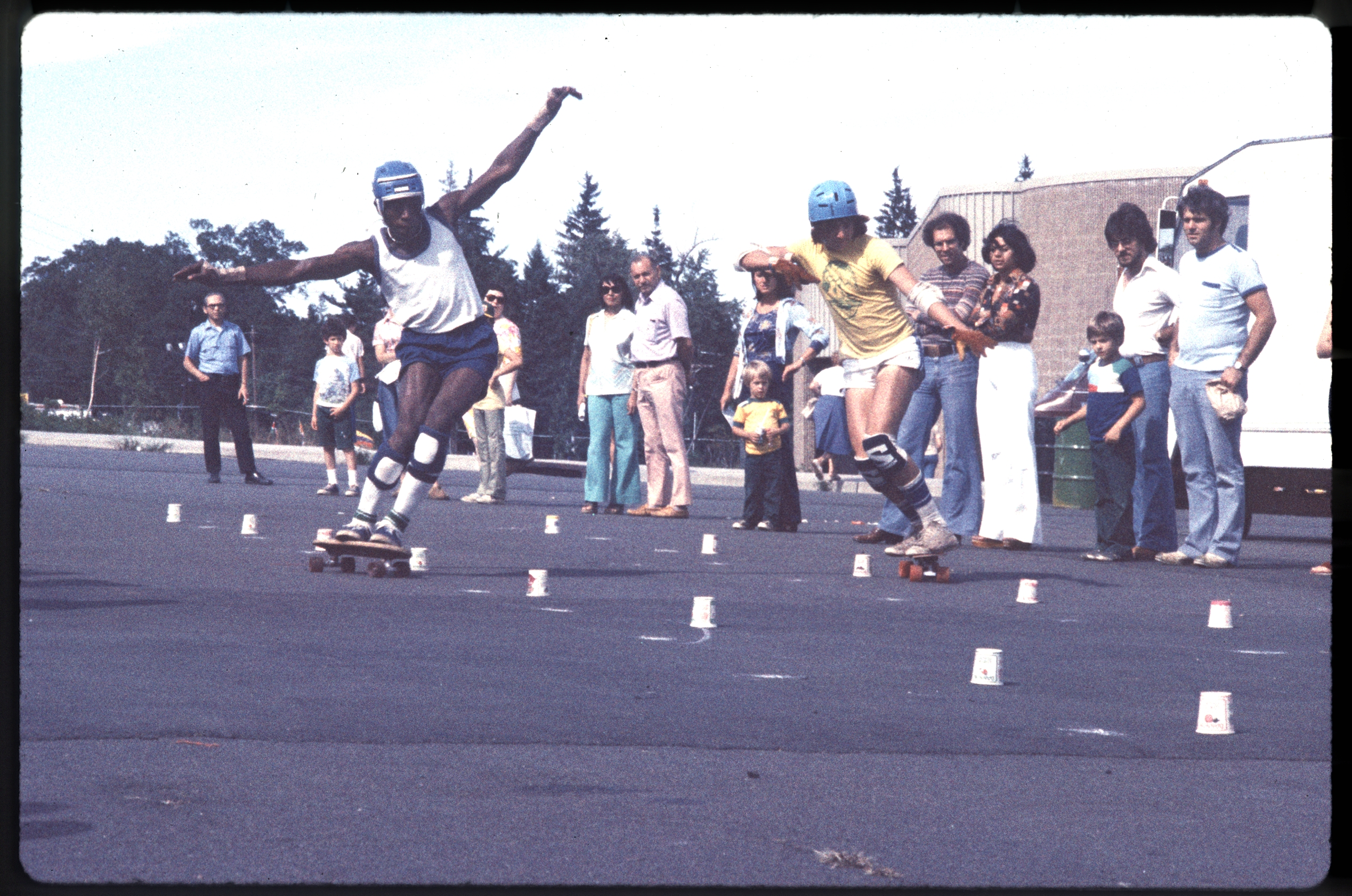 “I can’t wait to bring it home!” Charlie said. “It would make a nice ending to this saga, although we might have to have people watching locally on Netflix or Amazon. I’m hopeful though.” 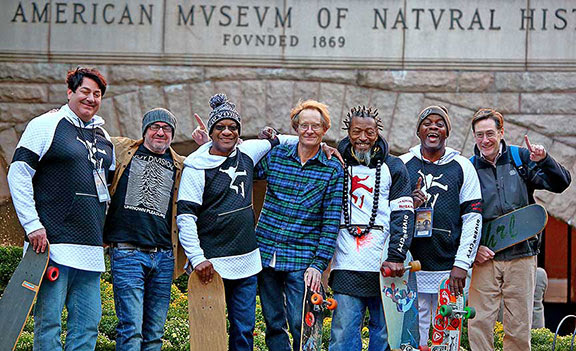 Having seen the film, I can say I wouldn’t bet against The Wizards. Nor would I bet against seeing a version of this poster on Railroad Place someday soon… 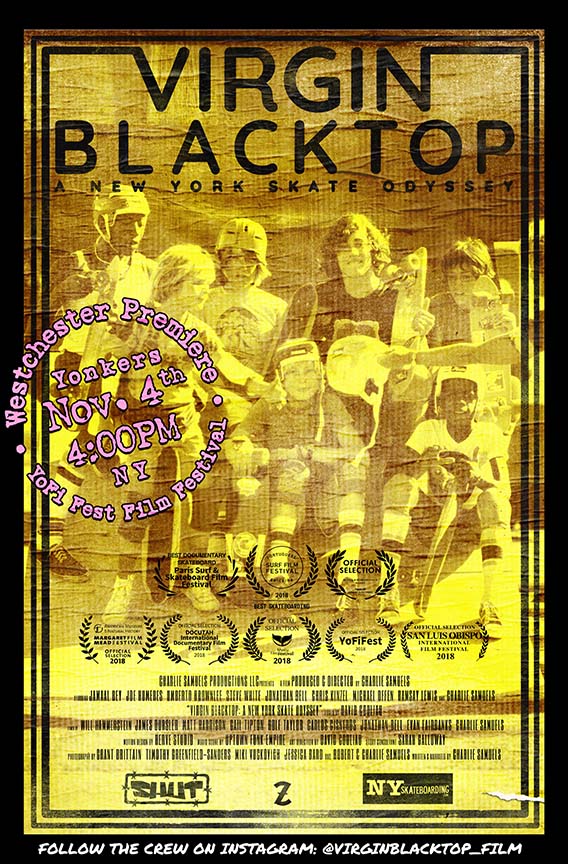 Either way, the accomplishments of Charlie Samuels and the cast of Virgin Blacktop are deserving of a standing O wherever they go.