Visit Saratoga.com For Everything Saratoga
Enter Giveaways Advertise
Note: Saratoga.com is not responsible for posts and comments written by non-staff members.
Home  »  Food  »  From India, with Love

GLENS FALLS – It’s a Friday evening and Red Fox Bookstore is in the midst of hosting what is probably one of its more fragrant book signings. Celebrated chef, cookbook author, and restaurateur Suvir Saran is on hand not only to sign copies of “Indian Home Cooking” and “American Masala,” but to encourage customers to sample the fruits of his recipe collections. At one end of the store is a table laden with Indian and Indian-inspired dishes from his books: Tamarind-Glazed Meatloaf, Better-

As
smitten customers fill their paper plates, Saran chats animatedly with
them about the rudimentary principals of Indian cuisine, which he says
should be very clean tasting and leave one feeling nourished both
physically and mentally. 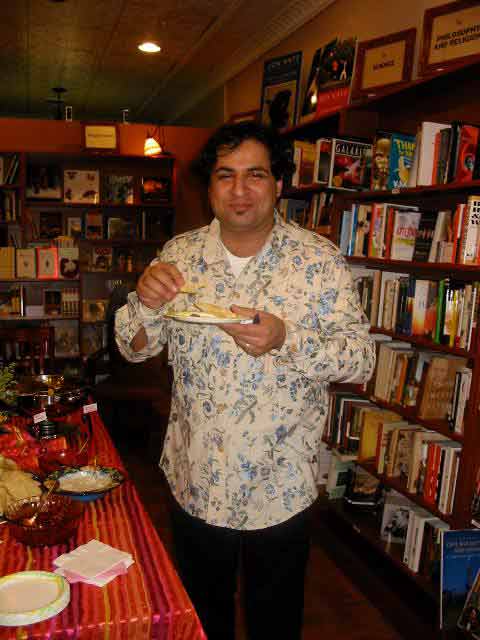 “Suvir
is an alchemist in the kitchen,” said Longo with a smile. “His recipes
make Indian influences relevant to the dishes I cook every day. I own
thousands of cookbooks and when I buy a new one, I’ll read the whole
thing and try out three recipes. If none of them strikes me as a
“keeper”, that’s as far as I go,” she said. “So far, I have prepared
seven recipes from “American Masala,” and have truly loved them all. I
would never have considered serving meat loaf to company, but Suvir’s
Tamarind-Glazed Meat Loaf changed that.”

Longo’s effusiveness is
precisely the reason Saran opened Devi (pronounced day-vee), his
pan-Indian restaurant in Manhattan. He describes authentic Indian
cuisine as “an exploration in the art of eating in a manner that
enriches mind, body and soul.”

“Good Indian food does not give
heartburn; instead, it leaves you sated and inspired,” said Saran.
“Indian restaurant fare in the U.S. has mostly been very mediocre and
has done great disservice to the amazingly magical cuisine of India.
It’s sad that many people think that Chicken Tikka Masala, the
cream-laden awful Kurmas, and the poorly prepared Vindaloos are the
length and breadth of Indian cuisine. India is inhabited by over 1
billion people who speak over 18 languages, represent every religion
known to man, and are of many different ethnic backgrounds. How then
could the foods of these greatly diverse people be confined to any one
stereotype?”

When he’s not overseeing operations at Devi, Saran
travels the country as a speaker and consultant, sharing his
philosophies on nutrition, the importance of eating local, and the
(often appalling) state of his adopted country’s eating habits.

On
weekends and during other stretches of downtime, Saran joins his
partner, Charlie Burd, at their American Masala Farm in Washington
County.

The 70-acre acre spread is home to a sizeable flock of
Heritage chickens, as well as Guinea Hens and a few Alpacas. While
Saran tends to out-of- town business, Burd manages the farm, which
includes the meticulous feeding of the chickens (he routinely
transports steaming bowls of homemade vegetable broth out to the coops).

Presently,
Burd and Saran supply the Saratoga Springs restaurant Max London’s with
fresh eggs, as well as individuals who stop by their farm to purchase
them.

Their other collaboration is the American Masala
Collection, the line of cook and tableware he and Burd have designed
which includes ceramic cutting knives, mortar and pestles, trivets and
serving platters.

Burd said that the ceramic knives have
extremely sharp edges, second only to a diamond, and come in five
sizes, each with ergonomically designed rubber handles. “They’re razor
sharp and unlike metal, don’t have to be sharpened,” he said. “The
knives excellent for vegetables, meats, and bread. And the rubber grip
has a guard that curves down so your finger doesn’t touch the blade.”

Since many of Saran’s recipes call for the blending whole seeds, herbs, and
spices, he reinvented the pestle prototype by creating his to have a
wide, circular base (as opposed to the traditional Billy club-shape) in
order to trap the ingredients easily in the mortar.

Longo, for one, is sold. “With an ordinary pestle, you have to chase the spices
all around,” she explained. “I didn’t have to do that this time because
of the heaviness and width of this one. It’s intelligent design. That’s
what I like about Suvir’s line; he doesn’t just sell his name to
something, he designs it.”

“The trivets are inspired from the
look of the Taj Mahal,” said Burd. “The solid cream colors are
reminiscent of its color. And we coated them with glaze so they look
perpetually new.”

The American Masala Collection is available at
the J.K. Adams retail store, online at www.jkadams.com and also at
Sterling & Company in Glens Falls.

But Saran and Burd also
have other plans on the horizon. In support of the local food
movement, they hope to soon begin making artisan cheeses and other
products.

“We have a barn and milking facility at the farm,”
said Burd. “And we’re debating whether to do production on the farm or
at an off-site location, which would expand our options.”

Burd said that with an offsite production facility, other dairy farmers
could participate and the product line could expand from cheeses to
include jams, chutneys, and other condiments.

“Charlie and I
would love whatever we end up creating as our production center to
become an entity that not only is our passion, but is one for the
community in general,” said Saran. “It is our hope that we can employ
locals, and make them partners in the business. We want the production
to be connected to the farm, to be part of our local community, and to
have the interest of the community at heart.”