Visit Saratoga.com For Everything Saratoga
Enter Giveaways Advertise
Note: Saratoga.com is not responsible for posts and comments written by non-staff members.
Home  »  Food  »  Greener Than Grass

By Drew Monthie of Ecologic Consulting

I have never been a fan of turf grass. For starters I hate mowing and on top of that all 3 species of grasses used in lawns (Bluegrass, Rye and Fescue) are native to Europe. They are cool-season grasses which means that they look their best when temperatures are cool and conditions moist. This is why your lawn looks nice in spring and fall, but not so hot in summer. In their native habitat these grasses go dormant during the hot months of summer. Here in North America to keep turf grass looking good when it’s supposed to be resting we waste phenomenal amounts of water: 30 to 60% percent of residential water used outside is used on grass which amounts to more 7 billion gallons of water used per day for lawn irrigation. To fertilize all of this grass and kill the pests common to the unhealthy practice of growing monocultures we use 3 million tons of fertilizers annually. Over 30 thousand tons of synthetic pesticides are used on lawns annually. $2.2 billion (2002) or more is spent annually on pesticides for home and garden use.
The average homeowner per acre uses 10 times the amount of pesticides that farmers do (Nicholas School of the Environment at Duke University, 2008). Many (if not all) non-organic fertilizers and pesticides are organo-phosphates or carbamates meaning they are made from petroleum further increasing our dependence on foreign oil.

All of these stats alone should be enough to make us starting thinking
of ways to reduce or eliminate lawn area for the sake of our own health and
that of our children or pets. What if you could eliminate these grassy areas
and grow your own food. This would reduce your grocery bill and cut down on the
greenhouse gases created by the transport of food from far off places. You can do this fairly easily! Using a no dig
method you can kill the grass and turn the area into a productive garden that
will supply your household with fruits, vegetables and herbs.

The best spot to grow food is an area that receives between 6 and 8
hours per day, south or southwest facing. 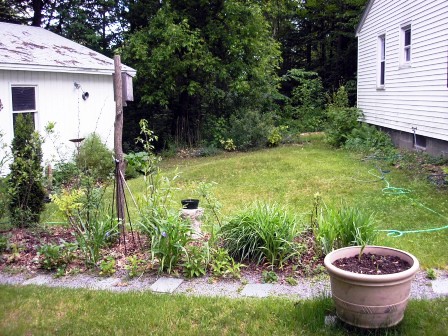 Locate this area in your yard and decide how large your garden will be.
A 20×20 plot can grow quite a bit of food.
You can lay out the area using a garden hose or rope to mark the
boundaries or if you are lucky your garden will be located where it is defined
by sidewalks or a driveway. 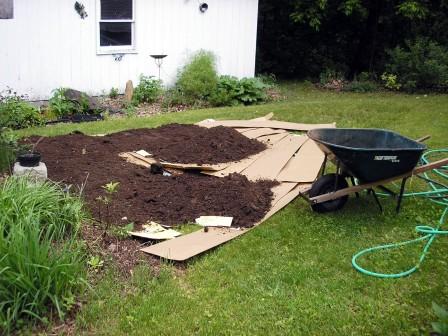 Don’t be afraid to use your front yard if that’s
where the sun is-you may inspire some of your neighbors to do the same. Once you have marked out the area cover it
with layers of newspapers (5-10 sheets thick) or cardboard. Cover the newspaper or cardboard with 4″-6″
of compost, humus or well composted cow manure.
Well composted means that it has composted for at least a year to kill
weed seeds. Once the area is covered you can begin planting. The advantages to this method are that you
don’t break your back digging up grass and that the grass decomposes underneath
and turns into soil. One further advantage to this method over tilling is that
you are not turning up weed seeds from underneath the grass. Seeds can remain viable for years or decades
waiting for their chance to grow- a 2000 year old date palm seed discovered in
the ancient fortress of Masada in Israel recently sprouted for
scientists after its long dormancy. 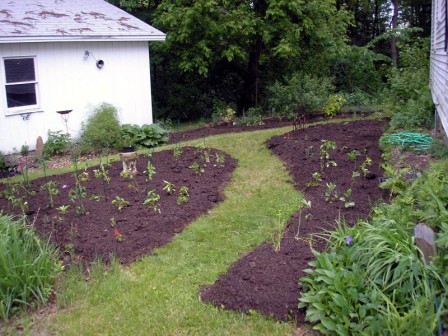 What should your planting strategy be?
Your vegetable garden, no matter the size, should have as many different
types of plants in it as possible. Be sure to plant plenty of flowers to
encourage beneficial insects such as pollinators. Many small pollinating wasps
(who are not interested in stinging you unless you try to handle them) have
offspring that prey on garden pests such as cutworms and other
caterpillars. Diversity in the garden is
the key limiting factor in preventing disease or insect problems. Each species of plant has its own complex
chemistry. This chemistry can be
utilized by some pests, but not others. The diversity ensures predators that
will eat pests visit your garden as well as including plants that certain pests
cannot eat or won’t because they are distasteful.

Use heirloom vegetable seeds or plants whenever possible. Many heirloom plants came into existence
before the availability of petroleum based pesticides and are naturally
resistant to insects and disease. They are also open pollinated meaning that
you can save the seeds and plant again the following year. The advantage to this is not just saving
money, but also preventing big agribusiness like Monsanto from controlling the
food supply and sources of seeds.

Another method of reducing the likelihood of pests is to plant in
natural patterns not rows. In a monoculture (only one type of crop,
like a lawn) if a pest shows up that likes to eat that particular species,
there is nothing to limit its spread. Planting a row of vegetables is like
creating a runway for bad insects to hone in on: their favorite food spread out
for them in easy to follow pattern. If you plan on planting several different
varieties of tomatoes for example don’t put them all next to each other in the
garden, spread them out with other plants like flowers between. The goal is to
utilize nature to make your own job easier.
Encourage beneficial insects with flowers and try to encourage birds
near the garden. Birds may eat some of the fruit in your garden if you have
fruiting shrubs or trees, but they more than earn their keep by eating insects.
During the breeding season most songbirds have a diet that consists of 70%-90%
insects to supply their protein needs and raise their young. Bluebirds, Wrens
and Phoebes and many other birds visit my vegetable garden every day to eat
insects and I have placed houses nearby to encourage them.

Last year I turned a small southwest facing lawn area between my house
and garage into a vegetable garden. My old vegetable garden had been further
from the house where I was more prone to neglect it. The new garden is in a
spot I have to walk past each day from either the front or back doors. Using boxes
from a flooring renovation project I covered the area in cardboard and then
covered the cardboard with well rotted manure. Then I planted it with corn,
tomatoes, peppers, eggplant, tomatillos, basil, scarlet runner beans and lots
of flowering annuals like nasturtium, salvia, African blue basil and leonotis . When laying out the beds I thought about how
I usually walked through this patch of turf-these areas became the paths which
I left as grass walkways between the garden beds. All season right up until
October I continued to harvest from this small garden. In the fall I shredded
leaves as they fell and top dressed the garden for the next growing season. Not
only was I able to reduce the amount of lawn I have to mow, but also to grow
more of my own food, knowing it had not been treated with chemicals. I also was able to enjoy the bird life that
the garden encouraged. The location of the garden closer to the house meant
that I spent more time in it. I could also see it from inside the house making
a previously boring lawn area into an attractive focal point. Best of all I was
helping encourage diversity and doing my part to fight global climate change. 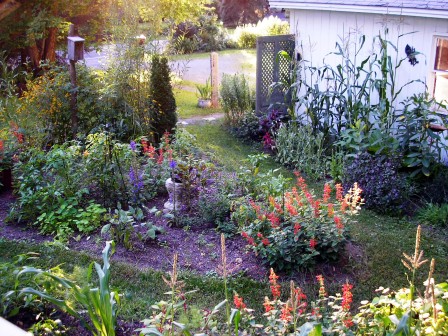 Use a no dig method to save your back, prevent weed seeds in the soil
from germinating, recycle old newspapers or cardboard and convert the turfgrass
into soil

Encourage birds in your garden to feed on harmful insects

Don’t use petroleum based pesticides- they are harmful to you, your
children and pets and also kill beneficial insects and birds

Keep adding organics each year to maintain fertility levels in the soil
and rotate where in the garden you grow each species to prevent depletion of
nutrients (Some plants are very heavy feeders such as corn, cabbage, lettuce,
onions, potatoes and tomatoes) and limit insect and disease problems.

About the author: Drew Monthie is the owner of
Ecologic Consulting, specializing in native plant species and ecologically
based, plant driven garden design. He can be reached at 518-792-9557 or online
at www.ecologicconsulting.net