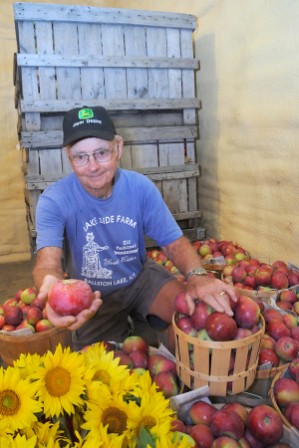 “Ooh I love their apple pie!”
“They make the best fresh cider!”
“You have to try their breakfast – it’s great.”
Mention the name Lakeside Farms to someone in Saratoga County and these are the kind of responses you’re likely to get. Started in 1948, Lakeside Farms has been a mainstay in the Saratoga and Schenectady region for fresh apple cider, vegetables, baked goods, or a fresh homemade breakfast or lunch.
Rob Pearce and his brother, both from Schenectady, started this fourth-generation family business as “a means to make a little extra money on the side” said Dick Pearce (Rob’s son). The brothers bought the Ballston Lake farm for its old barn and cider press, with the intention of making and selling fresh cider.
After a year in business, Rob Pearce, who held a full time job with General Electric, offered the business to his son Dick Pearce. Dick Pearce said yes, and has been running the Lakeside since he was a junior in High School, and taken it through its various transitions and expansions.
Said Pearce, “My father offered me the place to run. I decided I was up for the challenge, and I’ve been doing this ever since.” That’s of course with a break while he served in the Army. After which he returned and continued to operate the farm with his mother Agnes, until the early 1970’s when she passed away.
A true family business, Pearce’s wife, children and grandchildren all work at the Farm. His two sons and daughter work closely with him, and some of the work, like operating the 120-ton cider press, is done predominantly by family.
As Dick and his mother Agnes focused on making and selling filtered, preserved cider – the business took off. As their cider business grew, so did the demands. In 1958, Pearce opened a small retail store on the premise. In 1961, they renovated an old carriage barn on the property, naming it the Lakeside Cider Mill & Farm store, the store’s current location. They sold fresh vegetables and apple cider. Two years later they added pies, salads and sandwiches. In 1971 customer demand warranted the construction of an apple barn – to better serve their customers by offering a larger space for selling apples and cider.
In the early 1980’s Dick began growing his own vegetables on the property, including corn, squash, pumpkins, beans, tomatoes and cucumbers. In response to the popularity of their home-baked pies and made-to-order sandwiches, in 1990 Pearce also started serving homemade country breakfasts. Their business did so well, by the late 1990’s he added on a larger indoor dining area. Today, the Lakeside serves breakfast, lunch and select dinner dishes on Friday and Saturdays (dinners from mid-June to end of August.)
A keen businessman, Pearce is retired now, but you wouldn’t know it. He still works every day on the Farm. On any given day you might find him making cider, running deliveries or cooking up chicken or steak for one of their famous chicken roasts or for a special event.
The centerpiece of the business continues to be their fresh apple cider and apples, grown throughout the region, and sold for retail. Built in the late 1880’s, Pearce continues to use the 120 ton screw driven press to make their fresh cider. Impressive in size and look, the press takes up much of the barn where it is housed. Manually operated, the process for making cider with an old cider press is very labor intensive, commented Pearce.
History aside – a walk through the Lakeside Store tells the story of why this place is so popular with the locals. In addition to their cider, 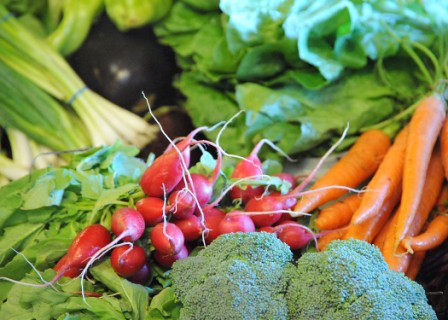 Lakeside Farms tops the charts in terms of fresh and local vegetables and products. The list is almost endless: fresh fruits and vegetables from local farmers and the Menands Farmer’s Market, homemade pastries and pie including the childhood favorite “whoopie pie”, local honey, 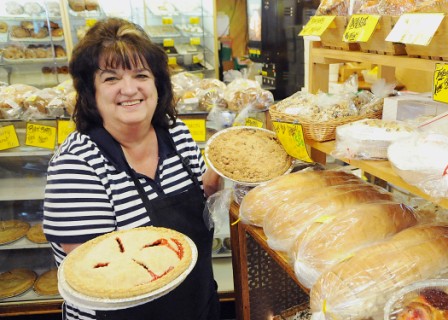 Adirondack Maple Syrup, fresh mozzarella, cooking items, arts and craft items, and a vintage candy section.
They also carry a number of other locally-made food products including milk from Battenkill Valley Creamery, fresh eggs from Thomas’ Poultry in Schuylerville, and meats and sausages from Oscar’s Smokehouse in Warrensburg, NY.
The success of Lakeside Farms is clearly due to Pearce’s adaptability and willingness to try something new. As business changed so did Lakeside Farm.
Said Pearce,”You can never be complacent in business. Our business changed as times changed.” In the early 1970’s, Lakeside Farm reduced their wholesale cider production when customer preference and regulations required increased pasteurization. Their cider is run through an ultraviolet machine which kills any “bad” bacteria. According to Pearce, to produce at the level needed for wholesale would have required a significant investment. So now they make enough to sell at their farm store and a few other locations.
Pearce also added on a greenhouse to the 25-acre property, where they grow and sell flowers and other plants in the spring. He’s raising pigs in the back, some which end up as dinner at one of their pig roasts. 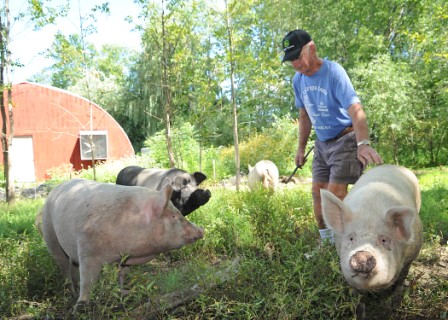 In 1998 he got the idea to build a pavilion which people could rent for events. A great success, the pavilion is regularly rented for wedding receptions, reunions, and family parties. They also host some of their own events including barn dances, big band dances, Polish dances, and chicken and pig roasts.
Pearce still lives in the original farmhouse on the property – where he raised his family. Over the 50+ years of operation Pearce has built a new storefront, a greenhouse, pavilion and four outbuildings to house the cider mill, cider making equipment, and a large walk-in cooler, along with other amenities.
A visit to Lakeside Farms, a few miles west of Round Lake village (exit 11) on Round Lake Road (turns into Schauber Rd) is a must. Stop in any day during the summer and you’re sure to find a parking lot full of cars and lots of customers milling around the veggie stand out front, checking out the newly-arrived apples in the apple bins, or inside enjoying a hearty meal.
Lakeside Farm operates seasonally, from mid-April through December, so be sure to time your visit accordingly. 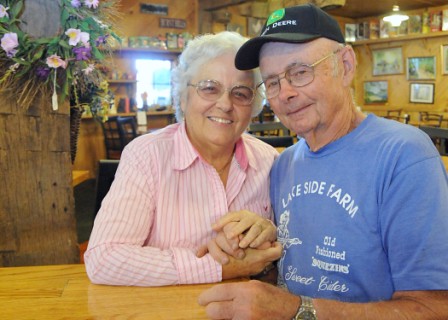 Amy L. Stock is a freelance writer and environmental educator living and working in Saratoga Springs, NY. Her writing focuses on buying local, sustainability and “green” living. You can find her through her blog, www.goinggreensaratoga.blogspot.com.