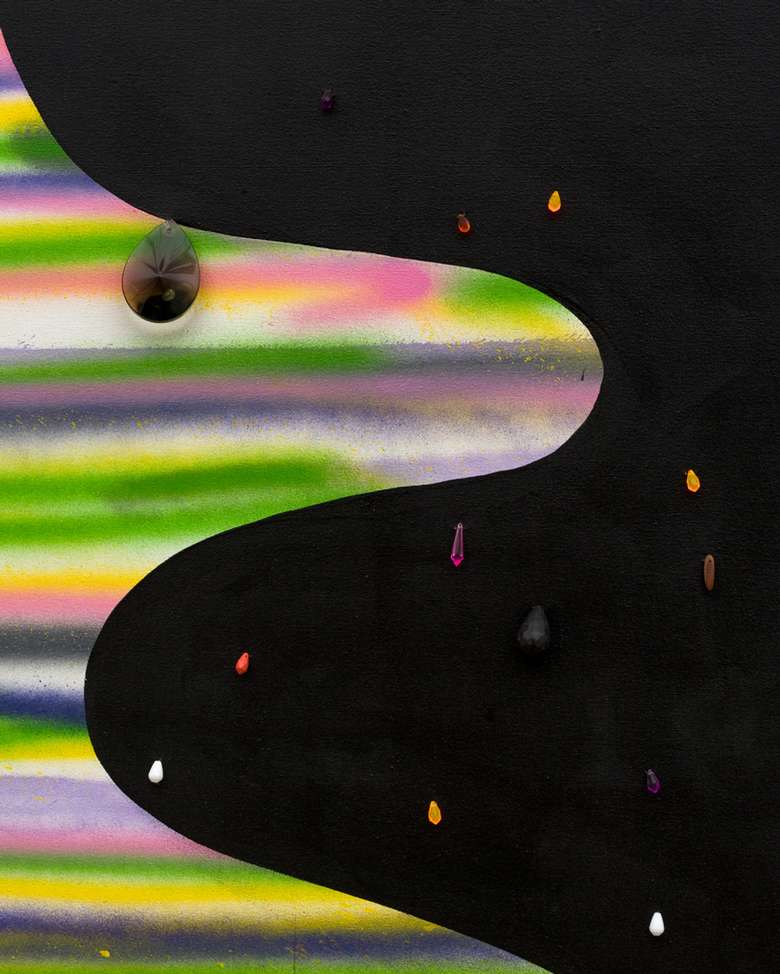 Sarah Cain is an artist who explores and expands upon traditional ideas of painting. Cain works on canvases of all sizes, often modifying canvases by cutting and braiding, painting on all sides, and installing the canvas with the back of the painting facing the viewer. She also paints on other surfaces, including interior and exterior walls, floors, and dollar bills. She uses vivid colors and shapes, and often includes found objects such as jewelry, pompoms, hula hoops, and other items she has a personal attachment to.

Her process often involves altering and disfiguring a composition until the original image is no longer recognizable. The creation and destruction of her paintings is part of Cain’s process that, in part, revolves around self-discovery. Cain describes herself as a feminist painter, using elements that are traditionally seen as feminine and “girly” as an act of non-conformity and antipathy to the patriarchal hierarchies of painting.

Sarah Cain was born in Albany, New York, in 1979 and grew up in nearby Kinderhook. She earned her MFA at the University of California at Berkeley in California and her BFA from the San Francisco Art Institute. Recent solo exhibitions include We Will Walk Right Up to The Sun at the San Francisco International Airport; The Sun Will Not Wait, Fraser, Los Angeles; and Wild Flower, Timothy Taylor, London. In 2014, she was included in I was a double at the Tang Teaching Museum. She has also been part of group exhibitions at Victoria Miro, London and the San Francisco Museum of Modern Art. Cain currently lives and works in Los Angeles.

Opener 33: Sarah Cain—Enter the Center is curated by Dayton Director Ian Berry in collaboration with the artist. The Opener Series is supported by the New York State Council on the Arts, Overbrook Foundation, Beverly Beatson Grossman ‘58, and Friends of the Tang.