Visit Saratoga.com For Everything Saratoga
Enter Giveaways Advertise
Note: Saratoga.com is not responsible for posts and comments written by non-staff members.
Home  »  Uncategorized  »  Saratoga’s First Snow of the Season 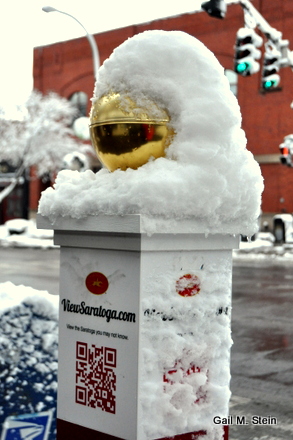 I admit that when I first heard we were going to get hammered with a significant snowfall the day before Thanksgiving, I was not thrilled. It had been 70 degrees only 3 days before! Now we were worrying about friends and family with travel plans, racing out to get last minute dinner items before the snow hit, and I personally had to search for (and eventually run out and buy another) snow scraper for the car.
But as the flakes began to fall on Wednesday afternoon, they were the fat, pretty ones that clung to the trees, and initially melted on the roads before beginning to cause traffic hassles as evening approached. I was enchanted…once I was safely home and enjoying the scene through my window.
I awoke at 4:00 a.m. to the sounds of snow plows and snow blowers, and opened the blinds for my first peek outside. It was still dark out, but the snowy scene was quietly beautiful. I crawled back under the covers, set my alarm for 6:00, and headed out the door to be one of the first to venture out and enjoy a snowy walk downtown.
I parked by Congress Park and headed toward Broadway.The first thing I noted was how incredibly cool the patterns of snow looked on all the wrought iron fencing around the park. It swirled and peaked and piled high. Then I looked ahead and saw the carousel blanketed in white as well. Everything was quiet and untouched at this early hour, the only sound the occasional snow blower. 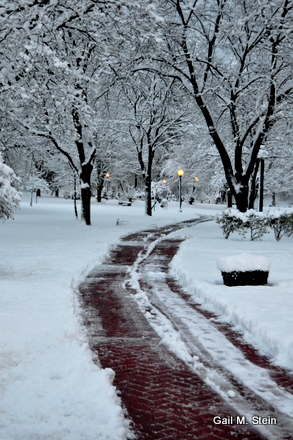 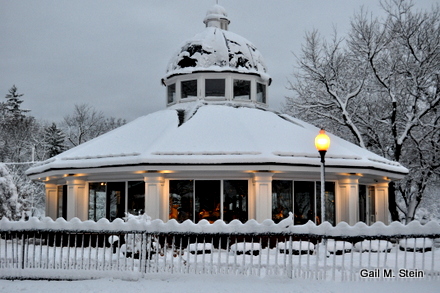 I knew I only had a little bit of time before runners and spectators began to arrive for the Turkey Trot at 8:30 but, for the moment, there were very few people to be seen, and I was able to photograph some snowy street scenes. The holiday decorations which had just been installed looked particularly festive with the new-fallen snow blanketing them. I headed north up Broadway to the City Center, then crossed the street and headed back down the other side.
I felt like Mary at the beginning of the old “Mary Tyler Moore Show”. I was so happy to be out there, even at such an early hour, that I wanted to toss my hat in the air, spin around and do a happy dance right on the sidewalk. There was so much to photograph! No matter where I turned, there were breathtaking scenes just begging for my camera to focus on them. So I proceeded to take 300 shots. 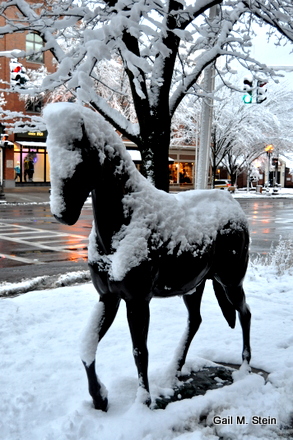 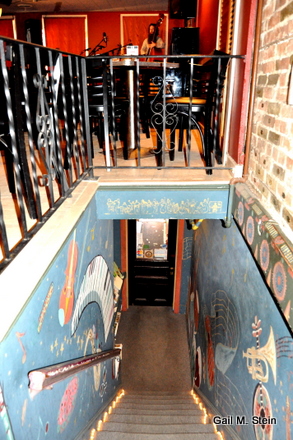 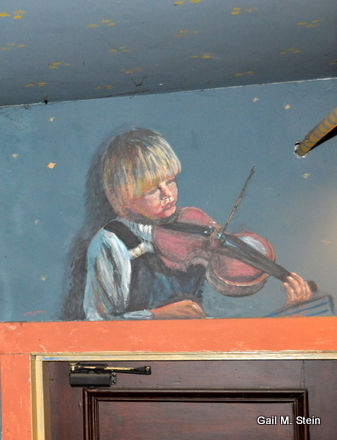 A good friend of mine, Tom Stock of Stock Studios Photography right here in Saratoga, once told me to remember to turn around and look at what is BEHIND me as well as what is in front of me as I am shooting, and I did that throughout my morning walk. I was never disappointed with the view, no matter which way I turned! 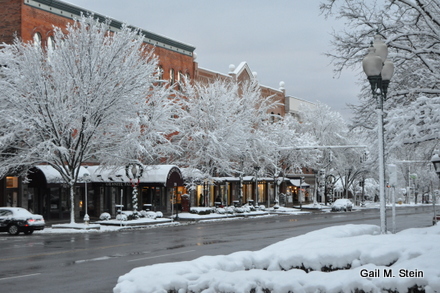 Again, I was fascinated by the patterns and shapes formed by several inches of snow on fences everywhere and, in this case, on the banister. The bike below was really cool in the way it was positioned on the ground and how the snow so nicely outlined its form. 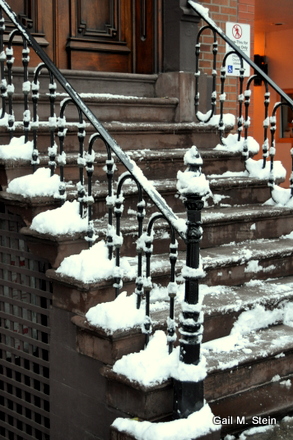 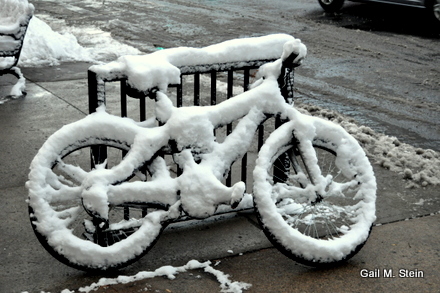 Finally, a few shots of Congress Park which finished off my walk. Runners were beginning to arrive and were warming up, running up and down the now-cleared sidewalks. I got one shot that I really liked of a few of them seen through the fence. 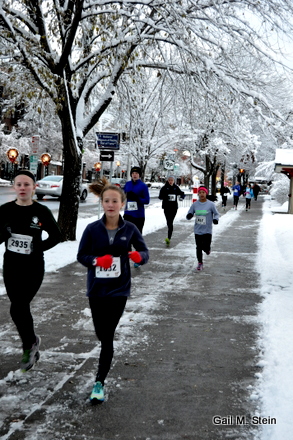 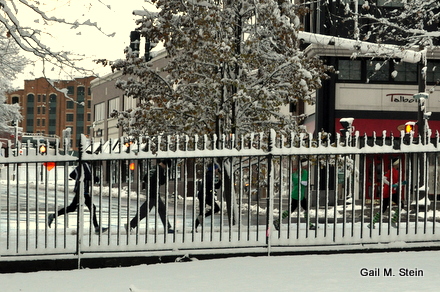 And now I will finish off this marathon post with some shots of the amazing beauty of Congress Park under a blanket of new snow and stormy skies. It was truly magical..like a living Christmas card. 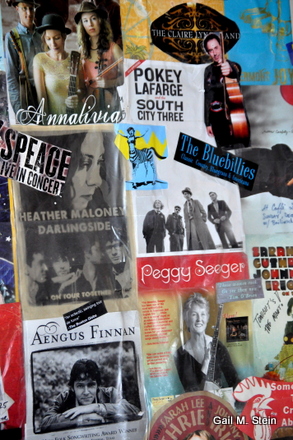 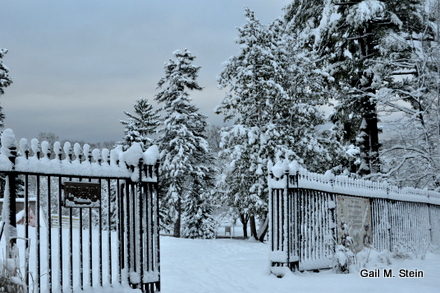 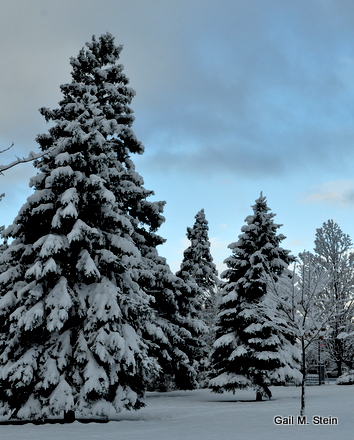 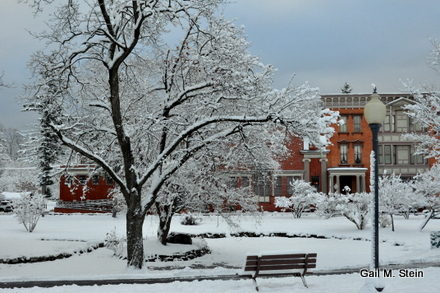 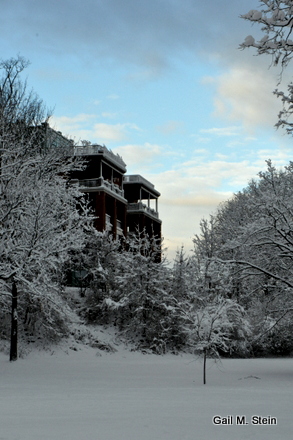 And I think this final shot qualifies as my favorite of the morning. I’m going to try to get to the Victorian Street Walk on Thursday night, so I’m hoping I can get some great photos there as well which I will, of course, share here. Hope to see you there! 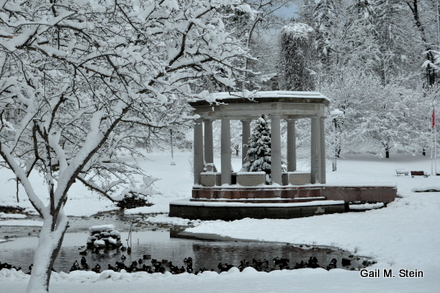