Visit Saratoga.com For Everything Saratoga
Enter Giveaways Advertise
Note: Saratoga.com is not responsible for posts and comments written by non-staff members.
Home  »  Broadway  »  While Most of Saratoga was Sleeping… 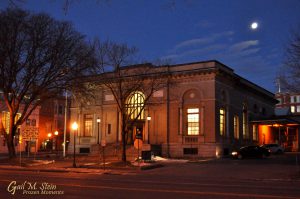 I WISH I could sleep in the mornings…particularly on the weekends…and most definitely past 5:30am. But I can’t. It doesn’t matter what time I go to bed or how exhausted I am, my internal clock starts singing well before the sun comes up. It’s crazy. But there’s something to be said for being up before the rest of the world. For one thing, the silence outside is profound. And that nighttime/pre-dawn sky always (and I mean ALWAYS) offers up something beautiful and awe-inspiring. Even slate gray skies at this time of day are constantly changing as the day slowly gets ready to begin. 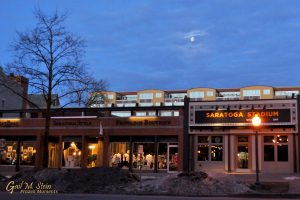 Some mornings I allow myself to just ease into my day with a book and some coffee; other days I feel energized and want to bolt out the door in search of beautiful photos. And, given that I’m currently following Weight Watchers and have just figured out how to sync my Fitbit to the WW app, I was doubly motivated to get out the door and start counting my steps!

I had no specific destination in mind this morning and, at 6am, I couldn’t tell

what kind of sunrise we were in store for, so I headed downtown. It was 10 degrees. Frigid! The sky was beginning to brighten and I started just randomly snapping photos…when I realized that the setting full moon was shining bright in the sky over all the shops and buildings. So I walked up Broadway and tried to get the moon into as many of the photos as possible. They are shown in this post in the order taken. 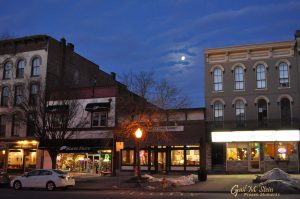 Unfortunately, despite my down coat, warm hat, and those mittens where you can fold the tops down and actually use your fingers, it didn’t take long for me to freeze. Seriously freeze. I was having a hard time walking because my toes were numb (I wore sneakers so that I could rack up a lot of steps on my Fitbit), and my fingers could barely operate the camera. Time to pack it up. 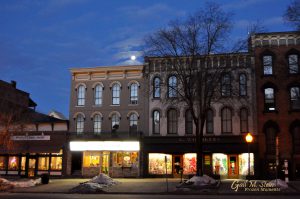 As I got back to my car, I noticed that, as I was busily focusing on the setting moon, I had missed the fact that a beautiful sunrise was in the works. I decided to race to the lake to see if I could catch any of it, although I didn’t think I would be quick enough to capture the fiery pinks at that exact moment. I did manage to get there in time to photograph some of the beauty, but I will save those photos for my next post (and probably more than a few will be posted to FB). I also met some really nice ice fishermen. 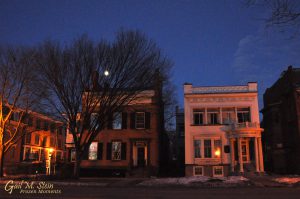 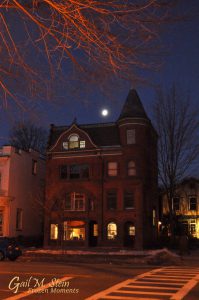 As I was driving past the City Center, I realized I had to capture that incredibly dramatic sky immediately, so I pulled in behind the Algonquin and took this quick shot. The pinks were gone by the time I got to the lake, but it was no less spectacular. Next post!