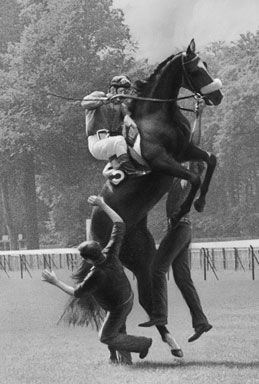 Many people new to racing are unfamiliar with the name of Jean Cruguet, and this is a pity. No, make that a sin.

Every year the oft-times fickle racing community falls in love with a potential Triple Crown Winner. And every year since 1978, this love affair goes sour when, for whatever reason–the would-be conquerer fails to pass the test.

Jean Cruguet is my favorite all-time Jockey. The reasons for this are myriad, not the least of which is that he’s a beloved friend, so I know a bit about the inner workings of the man’s mind.

But even those who don’t know Jean have ample reason to love and respect the man: in case you’re either a newbie to racing or a long-time fan who’s lived under a rock for the last 40 years–Jean Cruguet is the only undefeated Triple Crown Jockey. Of the 11 racing teams that went into the Kentucky Derby in search of the Crown, only Cruguet and his mount (my all-time favorite Thoroughbred), the mighty Seattle Slew, went into the Derby and emerged on the other side of the Belmont, undefeated.

In an era before racing purses (prize money) had reached the stratosphere–Cruguet earned in excess of $51 million for the owners of his mounts. That’s a phenomenal figure: the purse for the 1977 Kentucky Derby was a mere $227,500. Cruguet earned that money the old-fashioned way: by racing his butt off, and more-often-than-not, finishing first.

Jean Cruguet was born on March 8, 1939 in Agen, Lot-et-Garonne, France. His lifestory begins with rejection and sadness, more pain than a young boy of five should be asked to bear. But Jean is a man of great determination and focus, traits which helped him get through a childhood that would have broken many others. This tremendous grit found the perfect arena when he realized that he was a gifted rider. At age sixteen, a friend of his Grandfather offered him a job at a Thoroughbred racetrack. His bug days were interrupted by the Algerian War, when he was called to serve in the French Army.

How many Jockeys survived a war–never mind a conflict as brutal as that in Algeria–and came out on the other side, more-determined than ever to make his mark on the track?

(If his story so far sounds like a terrific plot for a movie–we are in agreement. Your Scribe is sketching out a treatment, even as I pen this.)

Following his military service, Jean did, indeed, return to racing, and at the track found the love of his life, his soul mate, the ethereally beautiful Denise Pendanx. Denise was the first woman trainer in Europe, a pioneer who intuitively understood Jean and mirrored his own deep, insightful knowledge of horses.

In 1965 they emigrated to the United States, the next logical move for a Jockey who sought challenge and the next rung on the ladder to renown. His brilliant style and intensity were rewarded in 1969 when he took the mount on the great Arts and Letters, riding the future Hall of Famer to victory in the Metropolitan Handicap at Belmont Park.

In 1972 the Cruguets returned to Europe for the racing season, where he won many Group 1 races, including the Prix Vermeille and Poule d’Essai des Pouliches in France and the Champion Stakes. Following the 1972 season, and being lauded in the French newspapers, they returned to the US to further build on his successes.

In 1976, Fate conspired to propel the seasoned athlete to take the mount on the then-two-year-old Seattle Slew in the Champagne Stakes. Nineteen-seventy-seven found Cruguet and Slew firmly entrenched in the racing Pantheon, as they jetted heavenward, racing undefeated toward the Triple Crown. Resounding victories in the Wood Memorial and the Flamingo Stakes struck fear in the hearts of all would-be challengers. This was far more than the pairing of two talented athletes: this was the physical, emotional and intellectual melding of two strong, unwavering spirits.

The team’s combined prowess; Slew’s strong, long stride and Cruguet’s singleness of purpose and inimitable skill lent a sorely-missed electricity to the sport. Moving as one unit, the team informed the racing world that they could not be stopped. One might speculate that the Triple Crown was claimed long before the first Saturday in May, 1977, as Fate would not be denied the powerful duo. Their destiny was written in the stars, their impression, indelible. 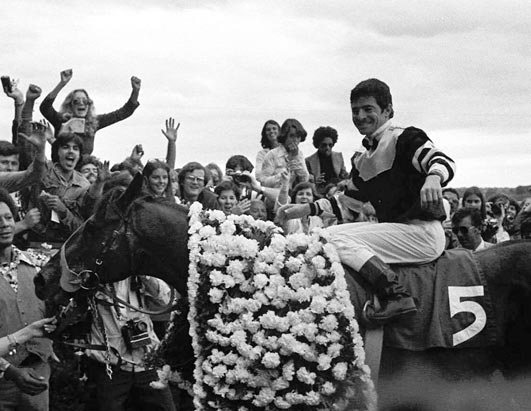 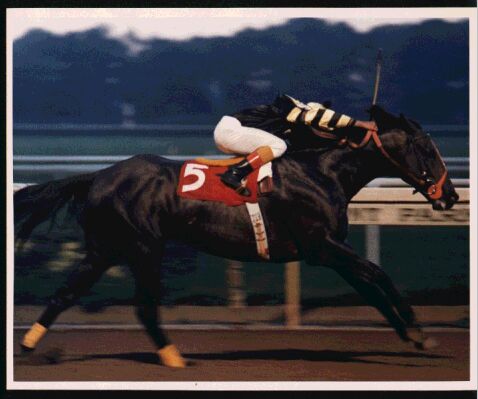 Jean Cruguet has given so much to the sport of Thoroughbred racing, I dare speculate that it cannot be measured. His riding style, so low and tight on the back of his mounts; the sheer athleticism that raised the bar and set the example for up-and-comers. His singleness of purpose, his profoundly deep love and understanding of the inner workings of the equine mind.

And then there’s the crop wave. It’s commonplace now, virtually every Jockey who crosses the finish line first stands in the irons and waves his crop (whip) in the air, a jubilant expression that connects those in the stands with the victory on the track. Jean Cruguet was the first to do this, in the Belmont Stakes. Twenty yards from the finish line, Jean knew that he and Slew had won the Triple Crown. Both horse and rider knew, 60 feet from the wire, that they were immortal, the only undefeated Triple Crown team.

Jean stood in the irons at 20 yards, and waved his whip. Some observers used this display as the opportunity to trash the great Jockey, to proclaim that he was arrogant and cocksure. If it was a moment of braggodocio, the man can be excused. It must have been a heady experience, to rise from a childhood of sorrow and abandonment, to this moment of being The Only. Very few people–or horses–can go to their grave knowing that they were The Only…anything. The fact is that Jean Cruguet is the only undefeated Triple Crown Jockey–and will no doubt hold that title for many years. It’s been 32 years–an entire generation–since that instant in time when he and Seattle Slew claimed that title.

So if Jean was, indeed, feeling a moment of supreme pride–who could fault him? But I’ve discussed that moment with Jean, and I know, as should you, that he did what he did because his heart was filled with unspeakable joy. He stood in the irons, got that-much-closer to Heaven–and in waving the whip, invited the fans at Belmont Park to share in the coronation.

It’s no accident that his action has became a tradition among Jockeys: he’s become an archetype, a wild gladiator riding his Pegasus toward the sun. And every Jockey on Earth wants to find her or his name among those of the gods. Jean Cruguet should be in the Racing Hall of Fame–an earthly social construct–for surely his name is written in the stars, as he and his eternal mount set the example in Plato’s Land of the Forms. 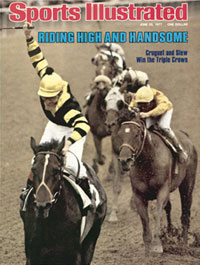