Visit Saratoga.com For Everything Saratoga
Enter Giveaways Advertise
Note: Saratoga.com is not responsible for posts and comments written by non-staff members.
Home  »  Racing 101  »  Racing 101 It Takes a Village: Getting a Horse to the Track, Part 1

If it takes a village to rear a human child, surely it takes an entire metropolis to get a 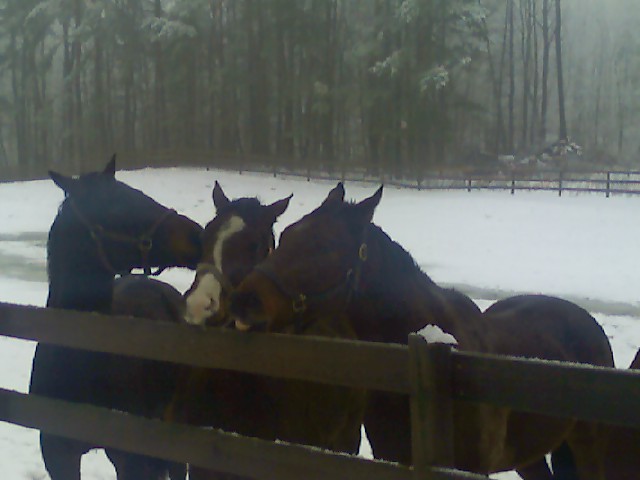 Thoroughbred to that first race.

To the uninitiated, it looks to be a very simple concept: Take a horse. Throw a saddle on her back. Throw a small person on the saddle on the horse’s back. Stick ’em on a racetrack, and open the gate.

Much easier said than done.

Let’s start with the basics. Now that we know how to identify a Thoroughbred, and how they differ from other breeds, let’s look at the life of a horse, and how they go from being a wobbly-legged, deer-like infant to a big, strapping, muscular athlete. And then we’ll get that athlete into the world of horse racing. It takes a lot of dedicated people, a ton of cash and a tremendous amount of commitment…

Cue the Debussy music: In a darkened barn, a broodmare has a baby Thoroughbred, a foal. 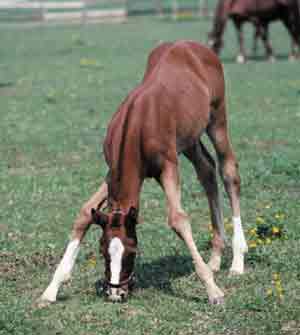 This tiny being can’t see very well at first, but somehow almost immediately manages to stand on four spindly, knobby legs and walk. This, alone, is a miracle and testimony to the breed’s tenacity and physical ability. (Picture a human newborn standing up and walking across the delivery room floor five minutes after being born.) (Note: payment for a stallion‘s services is due from the broodmare’s owner, when the foal “…stands and nurses.” This is the sign that the baby’s safely on four legs, and ready to face the world.)

This little dickens grows and becomes strong, all the while staying close-by Mommy. At a very young age, the foal has already spent her days alternately sleeping and running like a bat. Foals in a paddock with their Mothers are genetically predisposed to teach themselves to use these beautiful new limbs: exchanging challenging looks, the babies run back and forth across their large space, racing as if their lives depended on it. This activity they think of as being fun!

(Thoroughbreds, by-the-way, are the only breed of horse that disciplines their young.) So these well-behaved children are sticking close to their Mommies, and disciplined by other mares in the field, should they get out-of-hand in Mom’s momentary absence. The bonds between Mother and child are very close, so the next phase is particularly hard on both parties–but not to worry…

Breaking up is Hard to Do: Leaving Mom, and Meeting Peers

At around eight months, the foal becomes a weanling. That means that our baby horse–now about 500 pounds and pretty muscular–is separated from her Mother. This is a heartbreaking process, as both Mommy and baby are unhappy with the situation, and confused. The mournful wails coming from both Mom and offspring is enough to melt the hardest of hearts.

But the weanlings are quickly placed with other weanlings–all enduring the same trauma–and given their own paddock. All horses are herd animals, so this process helps them feel secure again, and bond with their paddockmates.

Off to the Sales!

At one year, the babies are called yearlings. Unless the farm that owns them is keeping them to race or to continue to grow in their own environment, they’re prepared for the yearling sales. Yearling sales are one of the most beautiful parts of the Thoroughbred industry: the babies now weigh in at around 900 pounds, and are usually very well-muscled. They’ve been given a “spa treatment”: their coats shine; manes clipped neatly and tails brushed. The night they step onto the stage at the sales is the moment that they’re most magnificent, to date.

Let’s say that our original foal is sold at the sales: she goes directly from the sales ring into the possession of her new owner, who takes her to a new farm where she’ll be given another year, at least, to grow, run, eat, sleep–in general, to be a horse. Some horses are ready at age two, others aren’t ready until age three or four, to start their racing careers.

(N.B.: Thoroughbreds aren’t fully-grown until they’re five years old, so even age three is too early for many horses to start their racing careers.)

Next Steps: “Breaking” and Training

The owner and trainer decide when our horse is ready to start her training. But before she starts the regimen of training, our girl goes through a ritual that is painfully ill-named: breaking. This is a terrible word, for it indicates that the horse’s will or spirit is broken–and that’s a lousy thing to do to any living being. I’m sure that Pat Parelli and Monty Roberts, gurus of natural horsemanship, have an even-more gentle method of breaking that works with the horse, and not against the natural, in-born spirit.

Both men, and many other enlightened beings like NYRA’s Head Starter, Roy Williamson, know that it’s the spirit of the horse that will help her become a champion. If the horse has no will or ego, she won’t give a damn, or call upon her memories of the competitive joy she got from racing her paddockmates when she was young.

It’s that competitive spirit, that drive to run, that makes Thoroughbreds, well, Thoroughbreds. So I personally hate that word, breaking. And the process isn’t painful or horrible, as the word indicates.

Breaking is really just teaching the horse that a human being will get onto her back and ride her. Period. It’s a reasonably long process–one that demands patience of both beings–of tethering her and eventually putting a blanket on her back, so she feels some weight. After she’s used to the blanket, a human drapes herself, belly-down, across the horse’s back. Eventually our budding star is ready to have a saddle and tack put on, and a human sitting in the saddle.

This whole process can look like Saturday night at the local redneck bar, and is testimony to the fact that, even though Thoroughbreds are a hothouse breed–they have all the defense mechanisms of their wild cousins. Bucking and neighing, our filly acts like the mechanical bull at the Dew Drop Inn. Not all Thoroughbreds lose it when they get the weight on their backs, but many truly rise to the occasion, and show their wild side. This wild spirit, preserved and brought into a race, is the spiritual thing that will propel our girl down the track and into the winner’s circle. It’s a matter of showing the horse that her spirit is cherished, but should be focused in a particular manner.

So our filly’s gone through the breaking process, and is now ready to train. Phew.

The Backstretch: a New Home, and a Career

For argument’s sake, let’s say that she’s three, and ready to rock. She’s moved from her owner’s farm, and turned over to the care of her new trainer. The trainer usually has stalls at a racetrack, being closely associated with a particular track. (This does not mean that the trainer races her horses only at that track, simply that she’s most-closely identified with that track or region.) The area where the barns are located is called the backstretch.

Our horse is now in her new stall at the racetrack. She has soft bedding, usually straw or shavings. Clean water, changed at least twice a day, and a feed bucket that will feature highly nutritious food with add-ins like molasses and sweet carrots. A groom will be there every day, seven days a week, to feed, bathe, brush and administer therapies. When our horse needs bandages on her legs, it’s her groom who will gently and deftly do the wrapping, speaking softly in Spanish or another language. (Latin American countries are well-represented in the backstretch, but so is Ireland, the (Caribbean) Islands and the African-American community.) 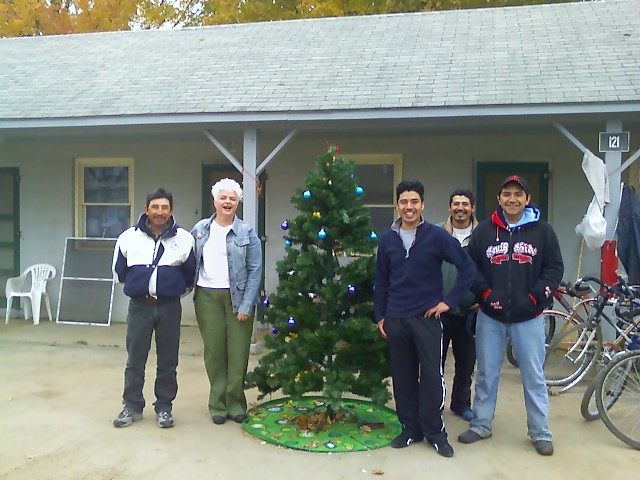 The work of a groom is hard, featuring long hours and great physical demands. Most barns start the morning at 5AM or earlier. The day ends after the horses have been fed their dinner, around 5 or 6PM.

The majority of the grooms we’ve witnessed are loving, kind, brilliant workers who adore the horses in their charge and have relationships with them. They know if a horse if “off,” if s/he’s not feeling well or just in a bad mood. Whether it’s intuition or the fact that they spend every day with the horse, the groom is the first line of defense when diagnosing a problem.

Watching the relationship between a groom and a horse can be an otherworldly experience, even if you’re just an observer: a groom who knows her or his stuff, cooing to a horse while s/he wraps the horse’s legs or washes the horse’s face, is like watching a Mother care for her baby. The paternal instincts are called-upon for male grooms, in a very similar fashion. (Secretariat’s groom, Eddie Sweat, was honoured when a bronze statue of Big Red was created for the Secretariat Center at the Kentucky Horse Park. “Big Red,” by-the-way, is Secretariat’s nickname.)

Our foal went from being a baby to a weanling, then a yearling. Then she grew another two years in the lap of luxury–except for that breaking experience–on her owner’s farm. Now she’s on the track, and settling into her new home in the barn. She may not realize it, but after those first three years of living large, she’s about to join the workforce!

What happens between that first night in the backstretch barn and the winner’s circle? Stay tuned…

Next Week: Training and Backstretch Life

Broodmare: a female Thoroughbred, who may or may-not have raced, whose job it is to create new baby horses

Stallion: A male Thoroughbred whose job it is to fertilize the ovum of a Broodmare. Thoroughbred racing doesn’t allow artificial insemination, so the process is called “live cover(-ing).”

Weanling: A Thoroughbred youngster, about eight months old, who is separated (weaned) from her/his Mother.

Paddock: On a farm, a paddock is an enclosed (fenced) field, where horses are given room to run, dine on grass and enjoy the outdoors. At a racetrack, a paddock is the area where the horses are saddled before every race, in view of the public.

Yearling Sales: An elegant, intense, electrifying event held many times a year at various locations around the world. Year-old Thoroughbreds are bought and sold, destinies are carved.

Breaking: An ill-named process by which a horse is introduced to the concept of hosting a human rider on her/his back.

Natural Horsemanship: The concept that horses, since they’re herd animals and are always looking for an Alpha to guide them, are better trained by working with the horse, rather than against them. Cooperation, not domination.

Filly: A female horse. In the Thoroughbred world, a filly is a female horse under the age of four, or one who has not been bred.

Colt: A male Thoroughbred under the age of four, or one that has not been gelded (castrated).

Backstretch: The area at a racetrack where the horses live, and are trained.

Groom: The first person to be there for a Thoroughbred: the groom is the substitute Mother for the horse, feeding, watering, bathing and administering therapies.