Visit Saratoga.com For Everything Saratoga
Enter Giveaways Advertise
Note: Saratoga.com is not responsible for posts and comments written by non-staff members.
Home  »  Uncategorized  »  Mare’s Musings: Rachel Alexandra, and the Requirement to Play Nice 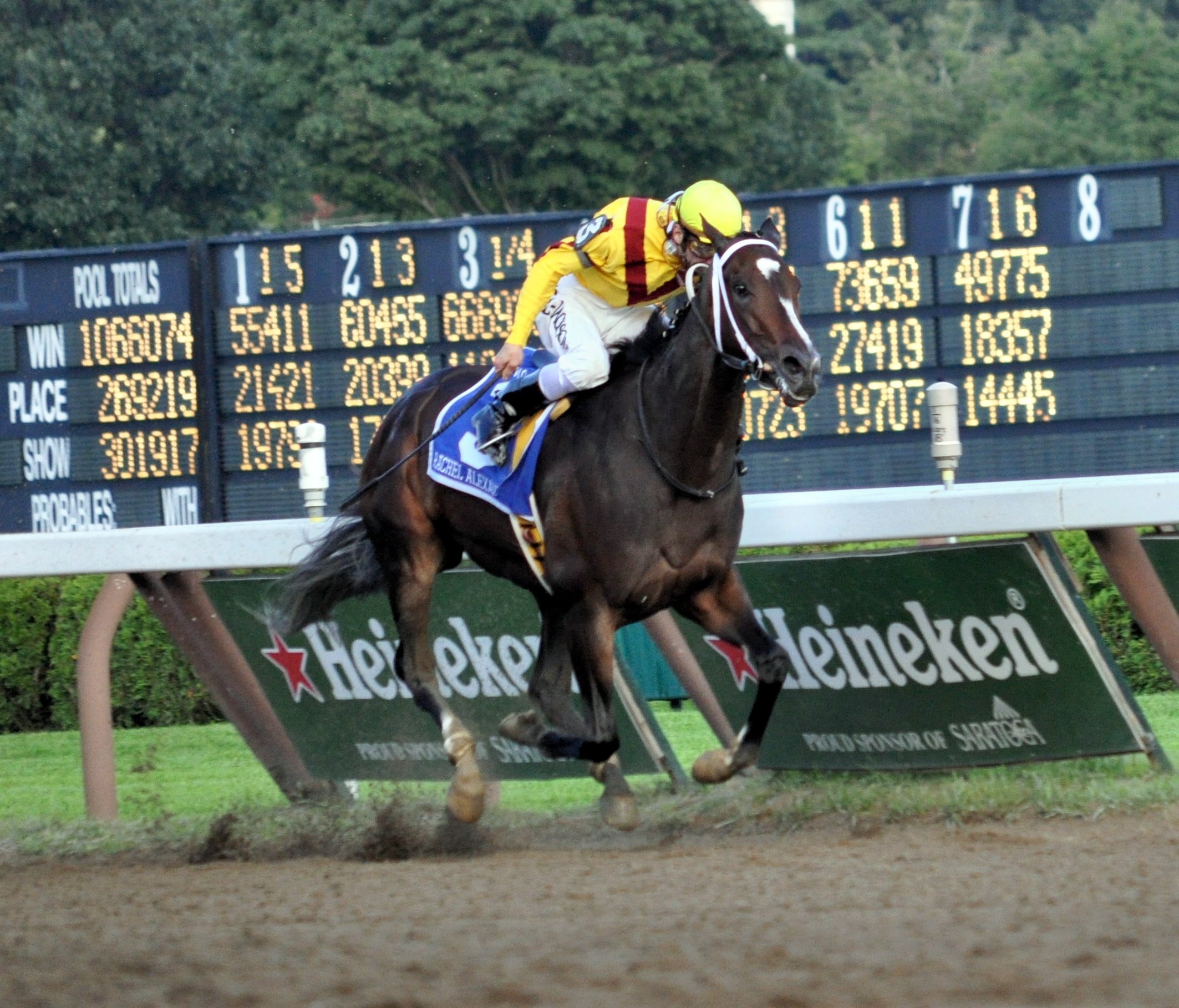 As I stood in the paddock at Saratoga Race Course on Wednesday following the post position draw for the Woodward Stakes, I could not but pick up a few words uttered to a couple of trainers by the one, the only, Tom Durkin.

Durkin, as you no doubt know, is the race announcer for New York’s three racetracks, Saratoga, Belmont and Aqueduct. Mr. D. is a brilliant guy; has a fabulous voice–and he makes the most of it. His calls are legendary, as is his insight into this sport to which he’s been privy for many decades.

Mr. Durkin acted as announcer for the post position draw, and made even the act of announcing that so-and-so had drawn position thus-and-such–sound fascinating. Following the draw of all eight positions, He interviewed several connections for we in the media who scribbled furiously or whose cameras whirred frantically to catch The Shot.

It occurred to me that something Mr. Durkin noted more than once was that, in essence, Rachel Alexandra has a target on her back. That of course every other horse in the race is gunning for her. The horses themselves are innocent and pure of heart, but their connections–very nice people, all–may just be tempted to speak out-of-school to each other.

Now, the men and women connected to every horse in this race are good people. They love their horses and they love their jobs. They must: why would anyone voluntarily get up at 4AM to walk a shedrow and feed a dozen horses, if there’s no love for the work? So these folks are all horselovers who are very, very good at their chosen professions.

Were they not very good at their vocations–their horses wouldn’t be in the Woodward, in the first place.

One of the lovely aspects of the Thoroughbred industry, something that blesses my heart often (an aspect which, I’m sure, is true for every other breed of horse in the world, for horses make humans much nicer than we are) is that this is a very small community. Everyone knows everyone else, one way or another. The Six Degrees of Separation are more like One Degree. Trainers are friends with each other. Jocks hang out at night, after a day of doing battle on the oval. 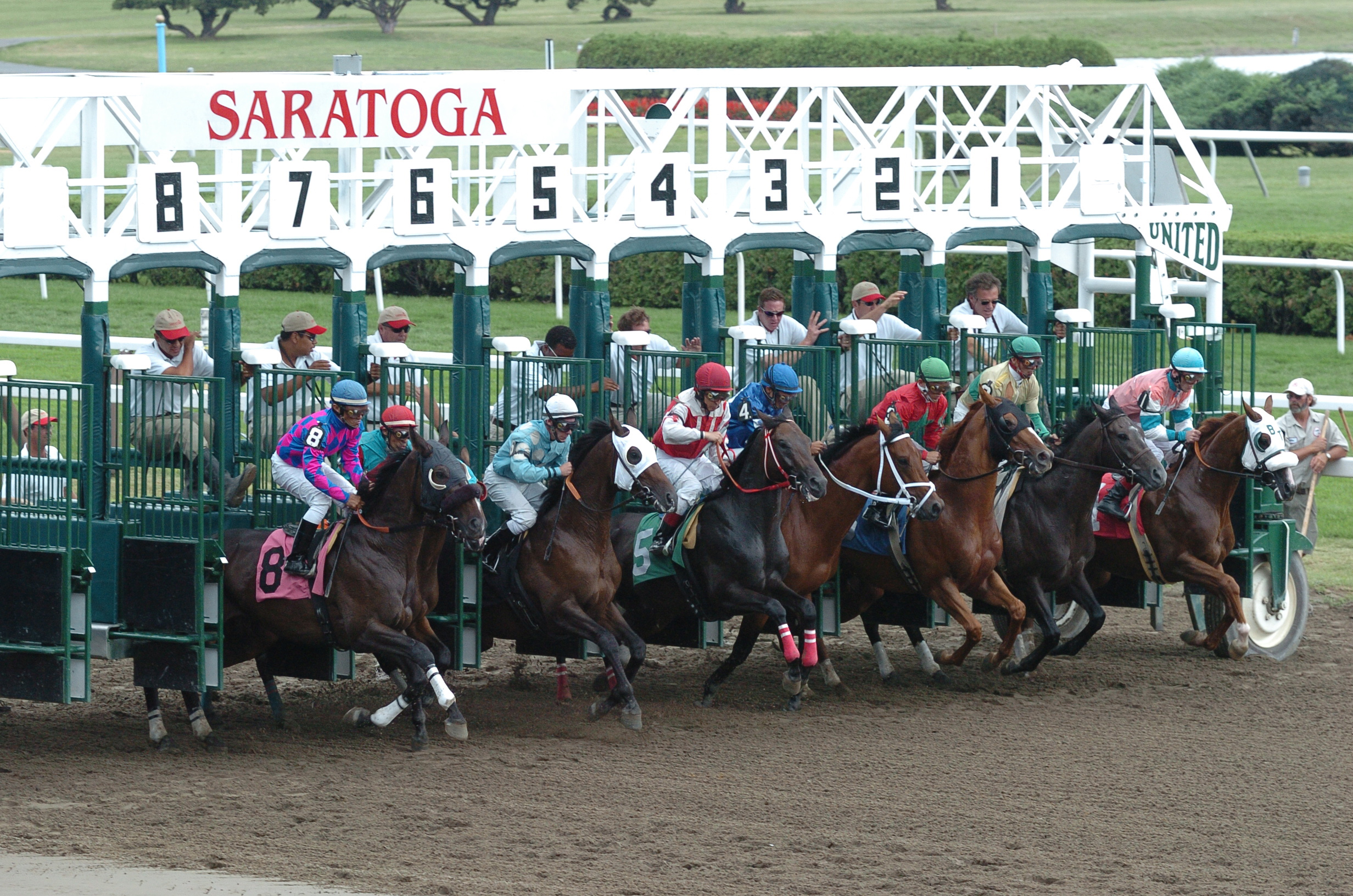 So I understand that it’s hard not to discuss anything and everything, especially when you’re buddies off-track with someone who’s your mortal enemy when you’re working.

But the bottom line is that this race, this wonderful race, this competition of friendly rivals, will do more for the sport of racing–will bring more people into the Saratoga gates–than almost any other competition this racing year. And that these friendly rivals have the opportunity to play clean, to let the filly do her best without impediment and let the chips fall where they may.

A clean race, where every horse has the opportunity to prove her or his mettle in a genuine display of gladiatorial prowess.

And it’s perfectly legit, absolutely allowable, for a trainer to talk to his jockey and plot the strategy that will take his horse to the lead in the effort to thwart the efforts of the mighty Rachel. A trainer/jock conversation is not only allowable–it’s expected. It’s business. It’s the job of the trainer to tell the jockey how to ride his horse.

But a conversation between two of these trainers, or between the trainer of one horse and the jockey of another horse–any dialogue between two or more different teams–would be a violation of United States’ federal anti-trust law. It’s called collusion. Collusion occurs when the representatives of two distinct businesses plot to deep-six the business efforts or success of another, third business. Another description of collusion is, interference of enterprise.

In horse racing, each horse and her/his connections comprise a distinct business. Legally, every horse is a business–and so a dialogue between the trainer of Horse A with the trainer, jockey, owner, etc. of Horse B–would indicate that collusion may be in the works.

Unwittingly, horse connections may find themselves enjoying a cup of coffee with a colleague and utter, “Rachel’s got to go.” This phrase reportedly had occurred in 2004, when Azeri–a mare of great talent, Horse of the Year for 2002–was in the Breeders’ Cup Classic at Lone Star Park. After the race, where–even from my perch in Saratoga, watching the race on TV–it seemed obvious that two horses intentionally pushed Azeri against the rail. They didn’t touch her, so they couldn’t be disqualified. But it was clear, from 1,200 miles away, that Azeri had been the victim of two horses working together to lessen her chances.

I saw it on the TV that day, and exclaimed to my companions that I’d seen this–and sure ’nuff, a couple of days later, a dialogue was reported in a magazine. Someone had overheard the trainer of one horse saying to the jockey and owner of a second horse that, “Azeri’s gotta go,” and that if she could be parked onto the rail–it was a done deal.

I called an attorney friend–an anti-trust lawyer from New York City, in fact–and he confirmed that, yes, if that dialogue indeed took place–that was collusion. And that it was illegal. 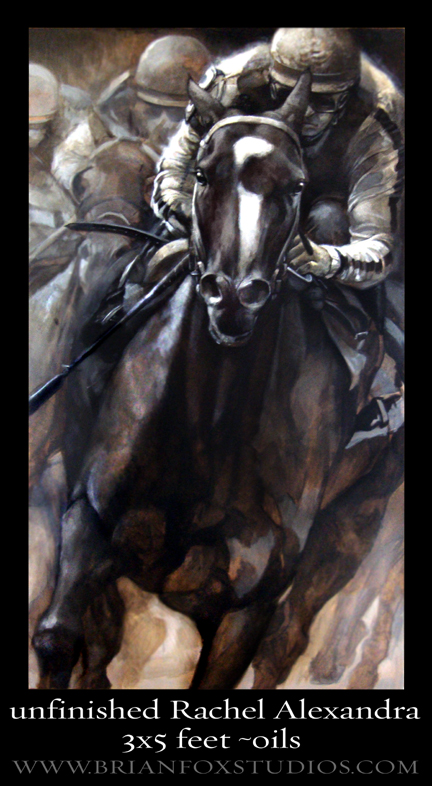 So I know, I understand–that this is a sport in which friendly enemies are willing to beat each other up mercilessly on the oval–then have a beverage and talk about the kids’ new school clothes, an hour later.

It must be very difficult to draw that line, to assure that business is business and friendship is friendship. But trainers and jockeys are very smart people. They’re savvy to the ways of the world, and so they know the rules, regulations and laws that dictate the business world and the sport of Thoroughbred racing.

I don’t want to see Rachel Alexandra fare horribly on Saturday, September 5th because she was conspired-against. If the object of my wild affection doesn’t win the Woodward–I want to see that it happened legitimately. That, for whatever reason, Queen Rachel wasn’t the horse for the race.

If she doesn’t win, it should be because some other horse felt his oats that day, and soared across the finish line with joy in his heart and adrenalin pumping in a heady moment of unbridled joy.

But if we see more than one horse trying to shove Rachel against the rail from her position in the three-hole–and Calvin’s not the one who moved her there–or if she gets boxed in in a ballet of pre-planned choreography–we’ll know that someone talked to someone else.

And that’s not only not “nice”–it’s collusion. And that’s a nasty word, a terrible accusation. Our sport doesn’t need any more scandal, or opportunities for those outside the sport to jump into our stuff. Racing needs good, clean racing and victors who win their spot the old-fashioned way: by taking a horse to the lead, and winning a clean race. Everyone can cheer for a victor who defeats the favorite, if the victory was achieved with a pure heart.

But no one can congratulate someone whose victory came at the price of their own soul.

Keep it clean, guys. Do battle against the mighty filly, do your very best. Take your A Game onto that track. And if it happens that you don’t defeat Rachel Alexandra–well, there’s no shame, at all, to coming in second or even last to the best horse in the country. Especially if you gave it your all, and played fair and square.

May the Horse be with every horse in the Woodward, and with all their connections.