It’s Sunday morning, and, as I sit, coffee mug in-hand and waiting to truly awaken, a report on Good Morning America pierced my blurry morning reverie.

The GMA reporter (whose name evades me, forgive, please: really, the synapses are not firing this morning for things like specific names of humans)–the reporter was in Iceland, reporting on the power of the volcano that is in the throes of foaling gas, glass and rocks. Because of its location, strategically perched on the upper half of the world, and on the Gulf Stream–this volcano is wreaking havoc in European and American airports, as the plume of poisonous junk is preventing planes from taking off or landing–in effect, stranding millions of travelers and effecting the economies of each country as the airlines lose billions of dollars.

We rarely think about something like a volcano, and how it may change Life as we know it. It’s a major inconvenience. But it is more than that: as economies suffer from this present belching of the Earth, many lives will be touched as prices rise and many nations struggle to recover from the domino effect caused by this event.

But no one is more at peril from the heaving and blowing of the Icelandic volcano than the Icelandic Horses who are stranded in the Restricted Zone. 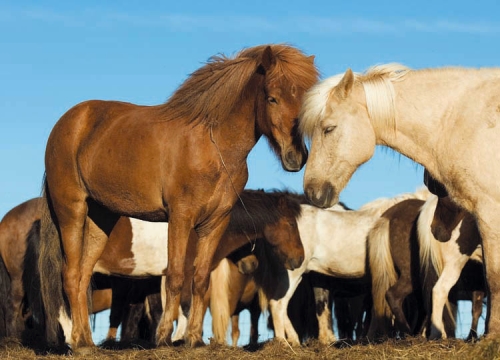 The emboldened reporter, accompanied by an official guide in (that which I hope was) a safe, Hummer-like vehicle–drove straight into the Restricted Zone, where the blues skies of the rest of Iceland surrended and become a sickening shade of yellowish-brown, then black, as they drove closer to the foul-mouthed monster pustule on the head of the Earth.

Getting closer to the volcano, the skies trned black as night, and dense. The reporter mentioned bullet points, including, “a stranded herd of horses…”

There, standing in the thick, black clouds, were a herd of Icelandic Horses–clearly Icelandic (breed), to anyone who knows even a little about breeds. Their short, thick necks; shaggy manes and adorable, nursery-rhymeish faces make them look like toys. Their gentle nature emanates from those beautiful countenances.

These beautiful, sweet creatures were standing in the middle of that-which-looked-like the Moon–incapable of negotiating the thick blackness that surrounded them and finding life-giving air.

I’m sure that, if the Restricted Zone is controlled by the government, it is because it is hazardous for beings with lungs, eyes, ears and mouths.

This would include horses.

These Icelandic Horses–a national symbol of the country known for being home of the most beautiful people on Earth–are being choked to death, through no fault or stupidity on their part.

Now, of course, the argument can be made–and I’m sure, will be thrown in my face–that these horses, like our American wild horses, are wild. And if I want to see the American mustangs left alone, not herded by the Bureau of Land MisManagement–left to live their lives–and die a natural death, however it happens–then, by my own measuring stick, I am interfering with the Natural Order by suggesting that the Icelandics be rescued and taken to a more-safe place, out of the range of the gases, volcanic rock and insufferable heat.

The volcano, while it is, indeed, a part of Nature, Herself–this is an extraordinary circumstance. No living being–horse or otherwise–is naturally equipped to escape the gaping maw of a predator that causes disorientation on such a major scale. Or that blinds them, creeps into their lungs and prevents them from finding safer ground, and air.

This volcano is a predator that has no natural predators, itself. No human efforts can stop the flow of lava, ash and steam. This monster is Godzilla, taking over the tiny Japanese city. This volcano cannot be contained or stopped.

This volcano will not stop until it has killed everything within its immediate path.

Including those beautiful horses.

So humans should intervene because the horses have never encountered this predator. There is no herdmind that indicates where to go, and how to get there, to escape the poison that wraps itself around their equine family like a blanket of black.

There’s no handbook, no Wisdom of their Alpha Mare in this herd, that tells them how to fight their way through the black to a place of light and good air.

This is why humans must intervene on behalf of the horses in Iceland: precisely because the horses have no natural defenses against a predator of this magnitude, or devices.

The BLM in American is a predator that can be effectively fought on behalf of the horses. The American horses’ future,that of living wild on the range, would be for their best. (So I believe.) Madeleine Pickens’ concept of a million-acre sanctuary is the best option: an environment that is controlled, and yet wild. The best of both worlds, the only solution that accommodates the natural needs of the mustangs and the crazed cattle ranchers and their overpaid lobbyists. Everyone wins in Mrs. Pickens’ plan.

But no such plan is in place for the Icelandic Horses. Inasmuch as Iceland was formed from volcanic action, and has formed and re-formed via that same volcanic action (think, Hawaii)–the horse breed cannot evolve to accommodate this. The only evolutionary accommodation that could happen is the scenario in which the horses grew gas masks and a roadmap.

I refuse to believe that it is The Natural Order, that this breed should die out in its own country because of a single volcano losing its mind in 2010. A breed that has been around for eons deserves the opportunity to live and prosper for eons to come, in the place where they originated.

This predator, this gaseous blowhard of a bully, cannot be stopped.

But good-hearted people, someone–anyone–can drive a horse trailer or ten into that bleak, Martian land-and-airscape and get those horses to air that is blue, and grazing land that isn’t poisoned.

Surely there are fan clubs for Icelandic Horses, and organizations of breeders.

If you make your living by breeding Icelandics, you owe it to them to help save their cousins in this perilous situation. I don’t know how many Icelandics are being threatened–or decimated, even as I write this–but you owe it, WE owe it, to them to do this good thing.

I’m not suggesting that the horses be picked up, airlifted to the United States and put into circi, wearing tu-tus and party hats.

I’m merely asking that someone on this planet organize, quickly, to go into that Restricted Zone of Iceland and save the lives of some horses. I don’t know how many: could be 10, may be 100.

However many we can save, we should save. In 2006, a group of women in the Netherlands worked with many other good hearts to rescue a group of about 100 wild horses who’d been stranded on a hill (which had turned into an island, due to flooding). The horses had lost 18 members of their tribe when the humans intervened.

One could argue that flooding in the Netherlands is definitely part of the Natural Order, and that the horses have should been allowed to drown, because it was Nature’s way of thinning the herd.

If you think that way, I don’t want to know you. Anyone who would deny a horse the gift of Life is no one with whom I care to associate.

Watch this video of the Dutch wild horse rescue and not cry. I dare you.

Then, picture those Dutch horses transforming into little Icelandic Horses, standing in an airfield of black smoke, ash, rocks and poisonous Gas.

Now tell me that there’s nothing that we humans on this big planet, we with trucks, hearts and brains–that there’s not a thing we can do to save the lives of the Icelandic Horses.

The only good reason I can find is that it’s The Right Thing to Do.

Thank you, and–May the Icelandic Horse be with you.

[Photo Credit: Many thanks to EquineAdventures.com.}