A few weeks ago, I was up way-too late, incapable of sleeping. As I channel-surfed, I thought that the infomercials and other shoppertunities should have bored me into the Arms of Morpheus.

But no. I couldn’t sleep, and became aggravated by the drivel that clogged the proverbial airwaves. “These people are earning Big Bucks,and I know great writers who can’t get a gig. No justice,” I declared.
But then, by the Grace of God and my finely-tuned eye, I spied a horse. A Thoroughbred, to be exact. And he was the newest acquisition of one Mr. Fred Sanford.
Yes! A double bonus: an episode of “Sanford and Son” AND a Thoroughbred. Seems that Fred bought the guy for fifty bucks, with plans to turn him into a stud horse and make millions.
Of course, you know how Fred’s plans always work out: they don’t. The previous owner had gelded the guy (the horse, not Fred). So once again, Fred was foiled…
The coolest part of the show was that they got their facts straight. Like many of you, I go berserk when I see a TV show or movie about horses, and realize that not a soul connected to the project knew a thing about horses. (I was disappointed, just last week, as I saw a murder mystery in which a horse’s withers were spoken of as being analogous to a woman’s…booty. Sigh.)
So I was delighted as I watched Sanford and Son, even saying aloud, “Cool. Someone connected to that show knew about Thoroughbreds!” 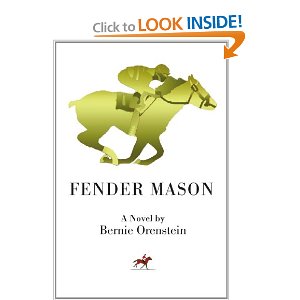 Now we fast-forward only about a week later, when I became aware of a wonderful mystery novel, Fender Mason, by Bernie Orenstein. Hmmmm…the name, “Bernie Orenstein” rang a bell, but I could not figure out why. So I Googled the man, and, well–Synchronicity, Man, Synchronicity–Bernie Orenstein produced and wrote many of the television shows with which I grew up, and watched in high school.
It seems that his first major gig as producer (or one of the first) was at the helm of none other than That Girl–no kidding. And yes, Sanford and Son was his production, as well. No wonder the show had the ring of Truth about it–he was the horseman who made sure that those facts about Thoroughbreds were accurate. (Would that, 40 years later, Hollywood was as conscientious when throwing around Horse Facts.)
Bernie Orenstein, himself, if a national treasure: he’s given millions of hours of laughter, tears and thoughtful moments, via his adventures in TV. I could wax on about the other shows with which he’s been associated as Producer, Executive Producer or Writer: Cosby, What’s Happening!!, Kate & Alie, Love, American Style, ER–and even, The Monkees (OMG, Davey Jones!)–and so many more. A huge chunk of American television has been the result of Bernie Orenstein’s creative, progressive, culturally-attuned mind.
Add to this the fact that he’s a legitimate horseman–his Sheridan Farms produced some nice Thoroughbreds, indeed–and you have the formula for a mystery book that rings true on every page. Bernie has chops in entertainment, racing and writing, and currently shares his storehouse of knowledge with lucky students at Long Island University, where he acts as Associate Professor of Television History.
Fender Mason is the most-fun read I’ve had in a long time. Yes, it’s a legitimate murder mystery–our hero, Fender, gets his first taste of horse ownership and the Saratoga high life, all while dodging danger and solving a murder. I love it that Fender is an Everyman: just a guy, not spectacular in looks or savvy. He’s a mensch, trying to make his way in life. That Dame Fortune puts him in a sticky situation, and leaves him to solve it–makes his profound humanity all-the-more appealing.
If you love great writing, and enjoy murder mysteries–this book is for you.
If you love horses, and don’t have much use for murder mysteries–this book is still for you. As you get excited about the horses, and Lexington, and Saratoga, and identifying places that you know, you’ll find yourself drawn into the plot. Like a spider, winking and giving you eye contact in order to lure you into her web--Fender Mason, the book and the protagonist–will catch you off-guard. You like him because he’s so real. You stay for the story to unfold because you really, really want him to do well.
And before you know it–you’re hot on his heels, solving a mystery for which he didn’t really sign up–but which he takes on because, well, it’s his destiny to be in that place, at that time.
You can read reviews of Fender Mason on Amazon.com (see link, below), or you can check out Barnes & Noble online, or Xlibris. The book is available on Kindle and Nook–and my all-time favorite way to read a book–good, old-fashioned paper.
If you read one book in 2012–a book that should become a movie, if anyone in Hollyweird has the smarts to do it–this is the book. (Bernie, if you can hear me–I’m beggin’ to write the screenplay with you…)
😉
Gallop, do NOT merely trot, to your computer and buy Fender Mason by Bernie Orenstein.
You’re going to thank me, and God knows, I do so love it when y’all email and tell me that I am wise, and oh-so insightful. (And I would love to hear about your enjoyment reading the book–drop me a line.)
Onward, through the fog, through the thick, black Kentucky and Saratoga nights–with my new friend, Fender Mason. This is one bet for which winning is guaranteed.
http://www.amazon.com/Fender-Mason-Bernie-Orenstein/dp/146284846X/ref=sr_1_1?s=books&ie=UTF8&qid=1326404159&sr=1-1Fender Mason by Bernie Orenstein, (C) 2011
Xlibris (publisher)
ISBN: Softcover: 978-1-4628-4846-1
Hardcover: 978-1-4628-4945-1