Visit Saratoga.com For Everything Saratoga
Enter Giveaways Advertise
Note: Saratoga.com is not responsible for posts and comments written by non-staff members.
Home  »  Mare's Media Picks  »  “Saratoga”–the Film. This, You Must See…

I love movies that were made in the 1930s. Everything about them–especially the black-and-white films, before color was developed–makes me swoon. I love the clothes, the plots, the complications that magically get fixed within the space of 90 minutes. I love it that men were men, and women more-often-than-not were tough broads, packin’ hearts and hair of platinum.

This contemporary society, this 21st Century, can be so smug: too many peeps under the age of 30 believe that those of us over 30 are idiots. And surely, if it didn’t happen,oh, within the last five minutes–it has no value. Western culture has too many “heroes” and others who are famous for being famous. It grieves me, actually, that someone with big hair named Snooki has a book on the “New York Times Best-Seller List.”
I doubt that she wrote the book, and now I doubt the value of the List.
It’s a relief to see that good movies still exist–but you have to wade through a sea of drek in order to find them. If it isn’t heavy on sex and violence–the odds of it being a big moneymaker are thin. The problem with a society that insists on a diet of such emotional loudness is that the subtle and delicate often are overlooked–or worse, cast onto the cutting-room floor.
And because too few people can think back to a year that didn’t begin in this century, contemporary culture has little room or respect for greatness that existed before this very minute. The phrase, “…that’s so five-minutes ago…” is not a joke.
I get overwhelmed by this western culture, and the utter disrespect for the past. I want to close my eyes and transport back to the black-and-white world, where everything was neatly tied up before the film ended–and no one was dead or assaulted along the way.
So I was relieved–and practically out-of-my-mind excited–on Saturday night, when I came across two movies featuring Clark Gable, a mini-festival on TCM. (Turner Classic Movies, a cable channel in the U.S.)
The first, “The Misfits,” will be fodder for another article in this column in the very near future. The second Gable film to show that night–“Saratoga,” a gorgeous, lush nugget from 1937–is the one that made my culture-weary heart soar… 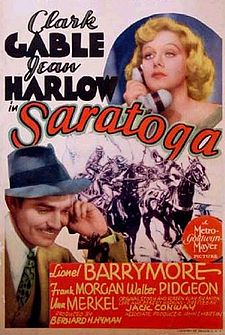 The plot of Saratoga may look thin, to the uninitiated: bookie loves society girl. Bookie connives to win society girl. Wealthy horsemen, beautiful horses and women in Palm Beach Chic dominate the screen. A little song, a lot of misunderstanding–a wink and a tweak–and then the ending credits roll.

But what happens to the bookie, the society girl, the lovely ladies and the powerbrokers and their horses–that is the stuff of a light-hearted romp through the lovesliest race track in the world: the Saratoga Race Course. (And since director, Jack Conway, insisted on authenticity, the film was shot in Saratoga, Louisville and other locations around Kentucky. To see the tracks and backstretches 75 years ago is a treat, in itself. The movie could be silent, with dogs in all the roles–and the scenery, even in black, white and grey–would hold your attention and leave you wanting more.)
Saratoga was written by the prolific and brilliant Anita Loos, and starred some of the greatest names in Hollywood. MGM didn’t play: they had only the best on contract, and they used those actors in everything from great epics to bits featuring tap-dancing daisies. The all-star cast featured Clark Gable, Jean Harlow, Lionel Barrymore, Hattie McDaniel, Frank Morgan, Walter Pidgeon, Una Merkel and Margaret Hamilton. (Note that Gable, McDaniel, Morgan and Hamilton were reunited just two years later, in Gone with the Wind.)
Ah, yes. Clark Gable has never been more handsome–or rakish. My aging heart went pitter-pat. Maybe it was the suit. Hmmm…yes…I think that Gable as bookie, wearing wing-tip shoes and great suits–and flirting up a storm at the Grand Union Hotel in Saratoga–that, women, is the stuff of which dreams are made. Jean Harlow was never lovelier–a sad aside is that she died during the making of the film, at only age 26. (When you see the movie, you’ll realize that her double was used at the end–wearing big hats, side-face shots–and yet, somehow it worked.) Each cast member shimmered, regardless of how small a role. (Remember the adage that there are no small parts, only small actors.)
And Una Merkel as Fritzie–well, Fritzie is my favorite character in the whole thing. Fritzie’s the kinda gal you want as your best friend: fiercely loyal, funny as all get-out, genuine, and smart as a whip.
The best part about Saratoga is that it’s smart. Referring back to the young notion that
nothing–nothing!–that’s 75 years old could be as, what? As cool–as it is now. As savvy–as this very minute in time. Well, this movie is celluloid proof that, yes, 1937 was a year of very smart people. (A great deal of important world events happened in 1937–if I discussed all of them, this column would be a book. Amelia Earhart was lost over the Pacific–and Picasso painted his insightfully brilliant Guernica.) But yes, Virginia, people “back then” were smart, and savvy–and knew the score. Better than that–they wrote the score.
And this is one smart, knowing film. The scenery is lush–and when you see it, you’ll ooh 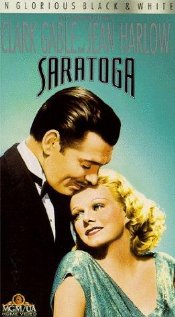 and aah, when you recognize places that you know from horse racing. The acting is sharp, and witty and sincere.
And the characters—every last one of them is real. Someone who doesn’t know the racing world may see the characters as being caricatures, instead: but they don’t know what we know.
As I watched the movie, I kept saying aloud, “Oh, that’s — !” and, “…and that’s –!” These people, the characters to whom Loos gave Life, actually are archetypes, people we see every day at every race track in the world. The racing world is its–our–own little society. There are characters, roles to fill–and, one-by-one, each of us takes out place on the soundstage, finds out mark and says our lines.
The actors chosen for the roles in Saratoga were exquisite, precisely because they could nail it–give life to the types of people who populated a race track at that time–and now. They are eternal characters, with whom we can relate.
This is why we want to be Fritzie’s best friend, and to be wooed by Gable’s bookie. Why we want to slap the society girl, until (inevitably) she grows up and quits preening. The horses never change–the equines who starred in the movie look the same as their descendants in 2012. The costumes on the actors, of course, are far-different than seen in clubhouses and backstretches today. But the souls who filled those costumes–they are real, and luscious, and layered. They are you, and me, and our friends and colleagues at the track, and hanging out at Siro’s, Saratoga National and the Keeneland backstretch kitchen. The human spirit hasn’t changed in millennia–there’s no reason to believe that the human soul, the core of the being, would make a remarkable change in just 75 years.
If you don’t see another movie in 2012, I beseech you to rent/find/somehow acquire Saratoga. TCM may feature it again soon. If not–find it. You will be delighted, warmed and blessed, as you see yourself in the mirror that Anita Loos held up–yes, in the last century.
When they made this film in Saratoga–they were chattering about the fact that the Saratoga Race Course was 75 years old. What an amazing thing, America’s oldest racetrack! And now, in 2012, we can look to next year and that same place–that beautiful, historic property with the ghosts of all those bookies, ladies, powerbrokers and horses–will be 150. There’s no place on Earth quite like Saratoga, and the tradition of horse racing here.
And there’s no movie like Saratoga in which to see the archetypes of these personalities–these lovely, dear horsepeople whom we know as our friends, in 2012. The archetype hasn’t changed one iota in 75 years–he same personalities existed 75 years before that, when the track was founded–and will be the same, 75 years hence.

Please see this movie this year. Celebrate the fact that this film holds up after 75 years–and then get geared up for 2013, when we’ll celebrate the 150th anniversary of the most magical place–the real Happiest Place on Earth–Saratoga.
Credits:
* Thanks to MGM (movie posters).
* Thanks to SonjaHenieFilmFan for the YouTube video of “The Horse with the Dreamy Eyes.”
* “The Horse with the Dreamy Eyes” music by Walter Donaldson, Lyrics by Bob Wright and Chet Forrest.
* Thanks to the Saratoga150 Committee (logo)