You know, I don’t write much or often about actual races–I’m not a turf writer, per se. My “beat,” so to speak, seems to be the stuff that others don’t deem to be very important.

My role in horse racing often is that of professional pot-stirrer. I’m just fine with that, because I think that writing about horses should be writing from the guts, from the soul of the person at the keyboard.
And when I see, read or hear of something that makes me want to beat someone–I turn instead to my weapon of choice: words.
So today I’m ranting about a beautiful horse. A magnificent horse, a Champion. A horse whose name you’ve probably never heard, if you’re a fan of Thoroughbred racing. And, because American horse racing media seems to be tunnel-visioned–or perhaps just plain bigoted, or stupid–you won’t get to see him race on Dubai World Cup Day, either.
The horse is named, TM Fred Texas. He’s regally-bred: sired by the outstanding Burning Sand, out of the Kong mare, Queen Kong. He’s light grey–almost white, dare I write–beautiful, and runs like his life depends on it.
Fred has won at Churchill Downs, Pimlico (on Preakness Day), Del Park–oh, yes–and at Meydan. This horse has earned his way into every venue where he’s kicked equine butt. Tomorrow (March 30, 2013), he’ll be at Meydan again, to defend his title: last year he won the Dubai Kahayla Classic.
But if you’re an American horse racing fan, you won’t get to see him take on the field.
Oh, did I neglect to mention? The reason why you won’t see him is that TM Fred Texas is a Purebred Arabian horse…

…and for some reason that I cannot fathom, American racing still has a snob thing going on about Arabian horses.

The fact that he’s raced and won at Churchill, Del Park, Pimlico and Meydan doesn’t sway American horse racing media. For example, just try to find him on DRF.com, in their Entries for Meydan tomorrow–Dubai World Cup Day. 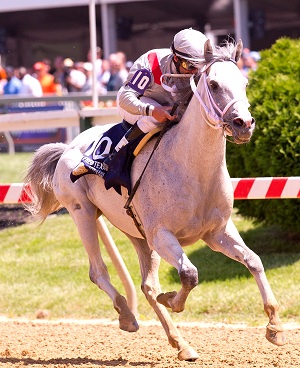 You won’t find him, because DRF’s entries for Meydan tomorrow begin with Race 2. Huh? What happened to Race 1? Oh, yes–that’s the Dubai Kahayla Classic–a race of Arabians. God forbid.
And yet. And yet this beautiful, strong, historic horse is a king among his breed. A prime example of the joy, majesty and history that comes packed into the DNA of every racing Purebred Arabian on the Earth.
So why, American media, don’t you start Dubai World Cup Day coverage with RACE ONE??? Why not give horse racing fans a chance to see The Original Race Horse–the Arabian–racing in their own native turf?
The Dubai Kahayla Classic is the equivalent of the Dubai World Cup for Purebred Arabian horses.
Maybe we need to start this lesson slowly: you know, Arabians–the foundation sires of every Thoroughbred who walks this Earth?
Darley, Godolphin, Byerly?
Ring a bell?
Without Arabians, there’d be no Thoroughbreds.
Arabian racing is magnificent, heart-stopping, historic–and utterly ignored by American horse racing media. I’m confused, disgusted–and have to ask why the bigotry? And, oh, please–do not give me that, “They’re not as fast as Thoroughbreds” nonsense.
Nothing on Earth is as fast as a Thoroughbred. (Except for Cheetahs, and we don’t race them.)
The fact that Arabians aren’t as fast as Thoroughbreds is inconsequential, unless you have some severe ADHD going on. A horse race that features gorgeous creatures running their hearts out–and on which you can bet–is really all most fans want to see.
Or maybe it’s just that the turf writers and commentators feel overburdened, and the thought of learning about Arabians seems too big a task to add to their already-full plates. Oh, wah! I know several great turf writers who cover both Thoroughbred and harness racing. They leave Saratoga Race Course after the last race, and rush across Nelson Avenue to Saratoga Raceway. If they can learn about–and develop passion for–Standardbred racing, I’m pretty sure they can learn about the world’s oldest extant breed.
If y”all want an in-service, I’m happy to oblige.
I think that American racing media and many unenlightened horse racing state commissions have decided that the American public doesn’t want to see Arabians race. But it’s not their place to decide for us. Bring on the Arabs, let ’em race. Let us bet on them, fall in love, join fan clubs, make t-shirts.
American race administrators and the media are always asking HOW to grow the sport? Over the years, some goofy and downright stupid ideas have sprung up. How about the inane idea of encouraging alcoholism in the infield on big race days? That’s a solid idea. If anyone thinks for one minute that the partiers in the infield will bet on the horses that day–they’re too blind-drunk to see, or even care that a race is happening–well, you’re delusional. If you think that they’ll come back to the track any other day, and become life-long fans–you’re outright nuts.
I’ve got an idea: how about we bring more actual horse racing–Arabians–to every track in the country? Give the fans a new breed to get to know–on which to bet? Bring in more paid admissions, fresh blood and passionate horse lovers?
Educate the people, and help them understand the deep, abiding, genetic relationship between the Arabian and Thoroughbreds. People are smart enough to understand that the traits that the Arabian brought to the table: strength, stamina, loyalty, intelligence–are the very traits that Mr.s Godolphin, Darley and Byerly sought to breed into their new equine concoction.
So I ask again: Why aren’t ALL the races on the card shown on Dubai World Cup day, for the American audience?
Realize, please, that the Dubai Kahayla Classic is important enough that the Dubai Racing Club features the race on their homepage. So why no press from the US? WAKE UP, American race fans, bettors, media and horse lovers.
Here’s something to inspire you: the official ad for the 2012 Dubai World Cup. My friend, Fadi Izzaldin, is a genius. He has passion, vision and made an ad that’s pure art. I can’t watch this video without crying. Every time. It’s powerful, colorful, spiritual and the music absolutely perfectly orchestrates every frame of this video.
And again–oh, yes–every horse in this ad–this ad for the Dubai World Cup–is a Purebred Arabian. Notice the gentle shape of their heads–their beautiful, otherworldly faces–the sweet musculature of their bodies. Note the pounding of hooves, and the power of that experience. Notice your blood pressure rising as the ad builds.
Note that the jockeys, astride these magnificent creatures suddenly become ancient Bedouin warriors in your mind and heart.
Watch this video--realize that the Dubai World Cup thought it important enough to feature Arabian horses–and then ask yourself why you, an American horse lover and fanatic for the sport–are denied the joy of watching them in Race 1 on Dubai World Cup Day.
Doesn’t make sense, does it? Makes even less sense that you can’t see them race–yet–at every horse track in America.
If my annoying badgering and obsessive writing can help make this happen–hopefully that dream will come true, soon. And hopefully the American racing media will join me in my insistence that the Arabian come full-circle and claim their rightful place in the hearts of racing fans.
Just as they’ve done for 5,000 years–first in the wind-swept deserts of their Middle East home–then in the hearts and minds of millions of others, all around the world.
America has a little catching-up to do.
Dubai Racing Club 2013 homepage, TM Fred Texas:
http://www.dubaiworldcup.com/news/international-raider-tm-fred-texas-looks-second-consecutive-kahayla-classic
Dubai World Cup 2012 video, Fadi Izzaldin:
http://www.youtube.com/watch?v=YAqD5_WH7wo
Photo of TM Fred Texas: courtesy, Pimlico Race Course.