Visit Saratoga.com For Everything Saratoga
Enter Giveaways Advertise
Note: Saratoga.com is not responsible for posts and comments written by non-staff members.
Home  »  Mare's Musings  »  I Love Racing, Everywhere–But I’m in a New York State of Mind.

As I realized that NYRA’s ringtone on my phone–“New York State of Mind,” by Billy Joel–had somehow fallen out of my BlackBerry, I became a little crazy with excitement about the next few months of racing in New York State. I felt compelled to write this little trib to our tracks, our people and my love for all of it…

Oh, friends. I’ve been a fan of the sport of horse racing for over 50 years. (I was four when first my Mother and Gram took me to the track.) I’ve been to many race tracks in many places. Experienced the lowest- and highest-levels of the sport.
Over the course of 50 years, I’ve probably lost the equivalent of the mortgage on a small trailer, lol, two bucks at a time. I’ve kissed rock star horses like Afleet Alex and fed cookies to a queen. I’ve sat in Clubhouses and on rickety apron benches, and I love each and every one of my experiences.
Every horse is an Eclipse-winning Champion, in my mind. Every Trainer, owner, jockey and apprentice–a soul with dreams and aspirations. There’s no day at any track, anywhere, that I’d trade for anything on Earth: no other sport can compare. No other sport features more beautiful, pure-hearted athletes as our horses–or more thrilling finishes, several times a day.
People who don’t know about racing are, well, lost, IMHO. (In My Humble Opinion.) It’s like we –you and I–all know a secret, and those poor slobs who aren’t in on it are missing the best part of Life…

I love every track I’ve ever visited--yes, every track, in its own way. Whether elegant or gritty, every race track has a story to tell. Between the floorboards and the cinder blocks or cherrywood, there lies beating the heart of a building that has witnessed history, heartache, jubilation, victory and crushing defeat. As they say–if those walls could talk. If they could write a book, some people finally would get the props they deserve. Others would go to jail.

But whatever the tale, wherever the track–all racing ovals on which horses walk, gallop, canter and breeze owns a bit of the cosmic story. They are part of the Big Picture, that which only can be seen from a satellite in outer space–and written in the human heart.
So I say in all Truth, that I love every race track I’ve ever seen. I love those I’ve not-yet experienced. God knows, I’d trade in my…my…drama award from high school graduation…to visit Meydan for the Dubai World Cup. And Oman, Happy Valley, Newmarket, Arapahoe and in the snow at Taby Galopp.
(These goals aren’t based just on my desire to experience horse racing in many different places, and cultures. It’s good, solid research: what kind of writer is content to stay within her safety zone, never to see what’s outside there? If I don’t know what racing in Oman and Dubai is about–how can I write the subject with any degree of intelligence? While it’s true that one need not BE a dolphin to WRITE ABOUT dolphins–it does help if said writer has at least been in the water.)
One of these years–hopefully, 2014, I”ll finally get to Dubai for the Dubai World Cup. Maybe 2014 will be the start of my World Tour. Yeah, that’s what we’ll write on the side of the bus: f!lly: the World Tour.
😉
And while I’m there, I’ll remind myself that His Highness loves Saratoga as much as I love the thought of Dubai. He owns a training farm in Saratoga, and is a loyal client of Fasig-Tipton. Saratoga and Dubai have a “sister city” relationship, due in large part to His Highness’ equine activities here. You know the expression, “It is good to be King”–well, it is very good to have a generous, kind, horse-loving Sheikh who loves our Saratoga as much as we.
And that’s groovy. 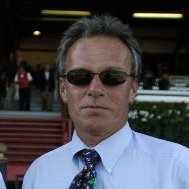 You know, the funny thing about me–well, OK, there are many funny things about me–but this is something I only just realized, deep in my heart. I am a New Yorker. I mean, a real New Yorker. I’ve lived in Westchester County, 20 minutes from Times Square by train. I’ve rolled down my window just so the guy who cut me off in traffic can see my eyes roll in response to his profound idiocy. I’ve walked past the Naked Cowboy in Times Square and refused to look at him, lest anyone should think that I’m a tourist.
I’ve been to Aqueduct in the coldest Winter day, and cried in the paddock before my baby girl, our filly, ran in her first race. (This, I think, should be a ritual of proof that one is a genuine die-hard: stand in Aqueduct’s paddock in a snowstorm, as you wait to see if the race gets called off. Look down as your nose snaps off when the snow subsides, the race happens and your tears have frozen to your face. Any race fan who can’t do that–well, I have to question their commitment to the sport.) 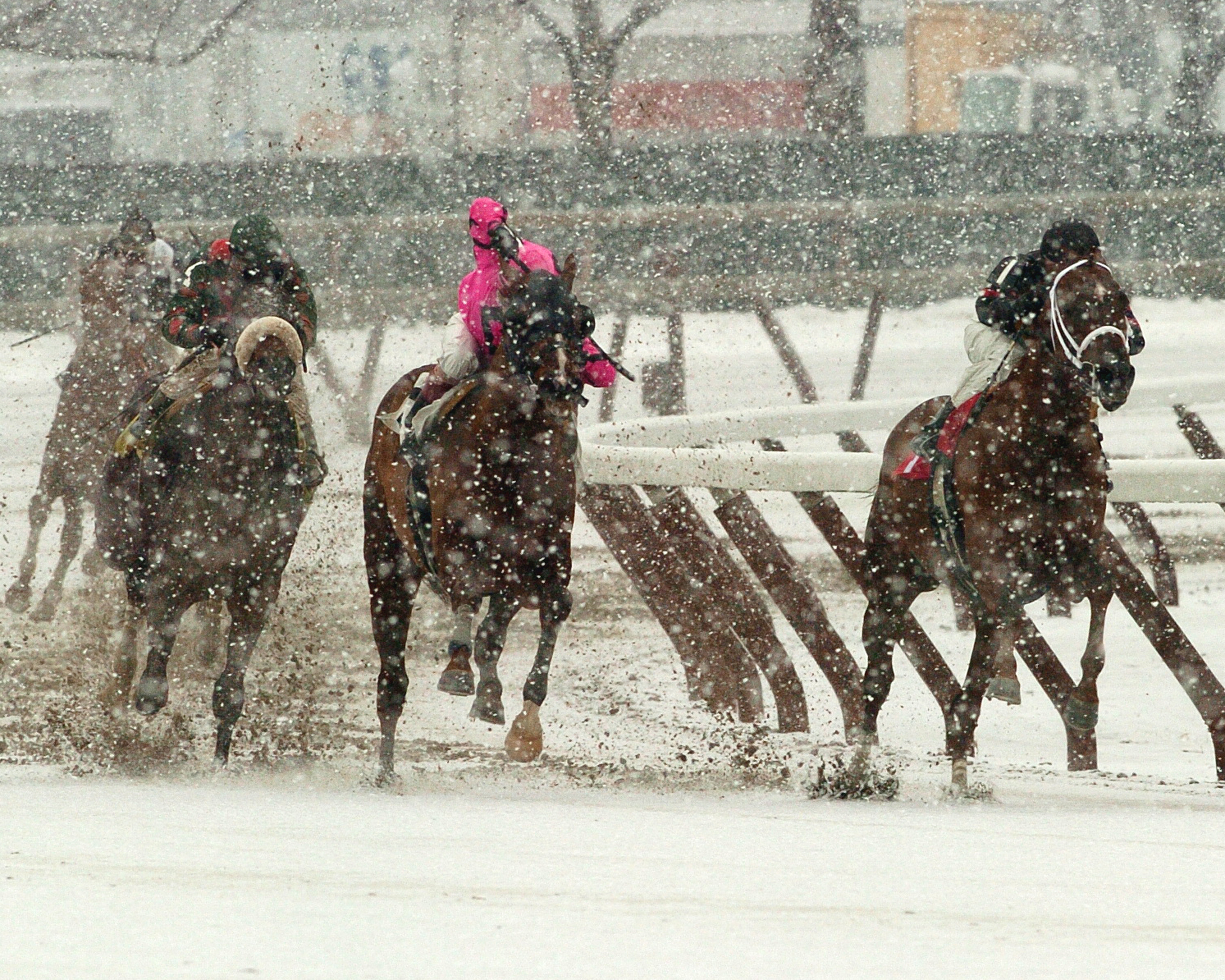 😉
I’ve had experiences that many people wish they’d had–and the most outstanding moments have taken place at a New York race track. Always.
I didn’t plan them, of course–they just happened. Whether it’s something in the air–or all of nature responding to the passionate way that New Yorkers live their–our–lives–there’s just something about the three tracks on NYRA’s circuit, and of Finger Lakes. New York State is our Home–all of it–and we’ve proven that we belong here.
When I was a child, my Mother’s response to my whining about the cold weather was that we who lived in the North were blessed, because obviously God thought that we were made of pretty tough stuff. The test, she said, was that IF you could live through the Winters up here–you deserved to live.
Tough insight, coming from a Mother. But even at that tender age, I nodded and said,
“Yeah, I guess you’re right.” 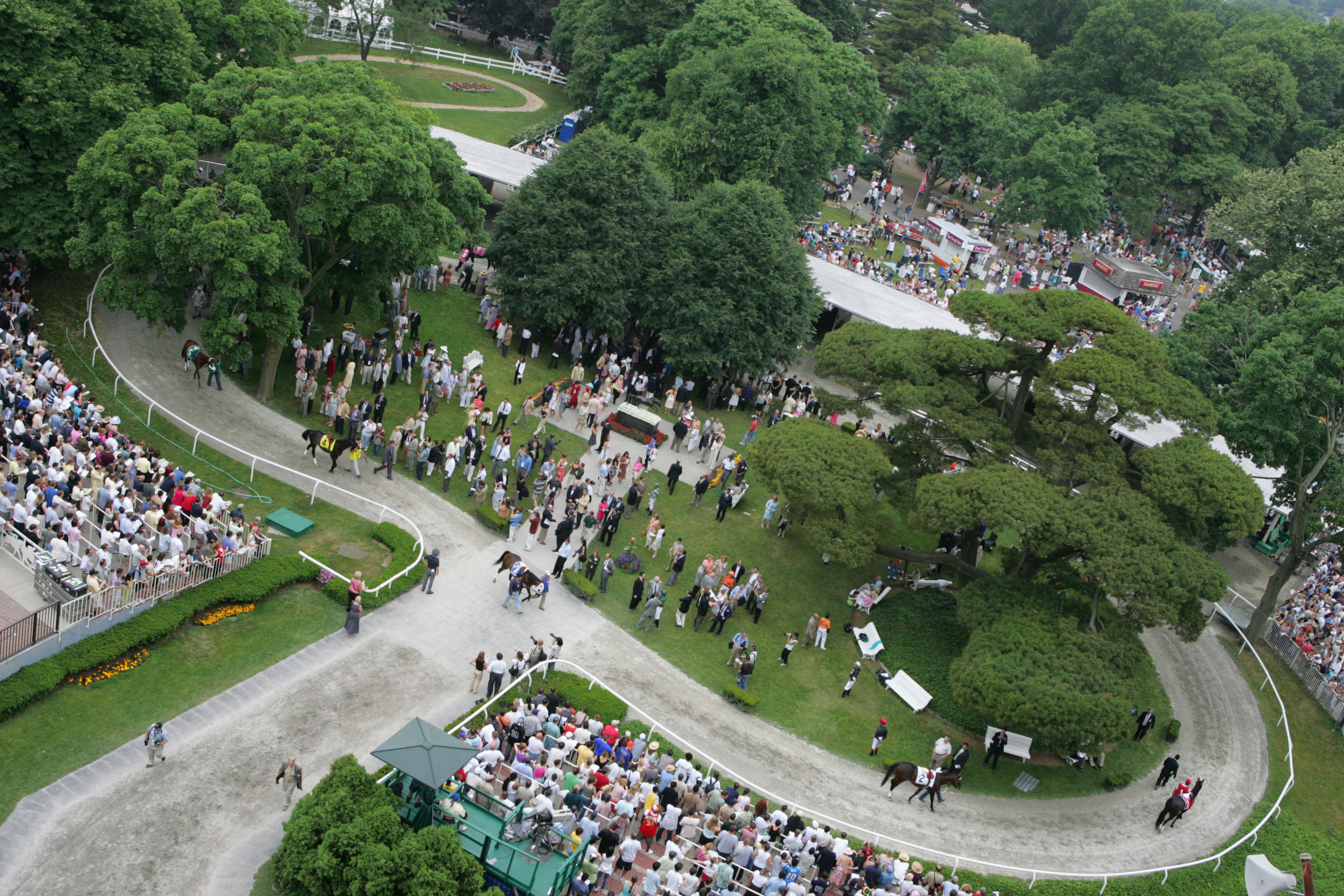 The majority of my childhood memories of horse racing were centered on my experiences at Saratoga Race Course. Many years later, I found Belmont, and felt just as much at Home there as at Saratoga.
Route 95 heading toward the Throgs Neck Bridge is a lot like winters in Upstate New York: if you can grip the wheel, not give in, and barrel ahead–you deserve to make it to Hempstead Turnpike.
In New York, ya gotta fight your way through highway traffic and I-swear-to-God-they-do-it-just-to-annoy-me construction, just to get to the track–so we deserve to be rewarded. Oh, God, no–we don’t deserve to win at the betting windows, or any such physical reward!
The reward that we’ve earned is that we get to experience the magnificence of the world’s greatest and most beautiful horses, marching out onto the monstrous track at Belmont.
We’ve earned our way onto that finish line rail. (Doesn’t seem to be enough of a reward for you? Do you know the history that rail has witnessed?) 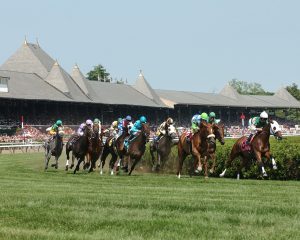 And what is more beautiful than the vision of the sun, setting behind the Saratoga Clubhouse at the end of a racing day? My friends, Lenny and Patti, can attest to the majesty, the peace, of that moment–day after lazy summer day. Where else can a race fan sit in a cafe that’s mere feet from the track, and exchange stories about the characters, the insanity, the wonderfulness of our sport? (These magical moments are tarnished only by my occasional fear that the place really might be just a mirage. I tend to glance over my shoulder to look at her, just to be sure that she doesn’t disappear as night closes in.)
By the time my earthly journey is over, I may have visited the majority of the horse race tracks in the world. And I know that I’ll love every single one of them, for their unique stories, fables and history–both real and fabricated.
But the one place to which my heart always will return is the race tracks in New York State.
I know of no other place on this planet that serves up grit, savvy and compassion in the same breath.
I’ve never met people who are as passionately in love with horses, yet who share also my mistrust of any living being who doesn’t have four legs. 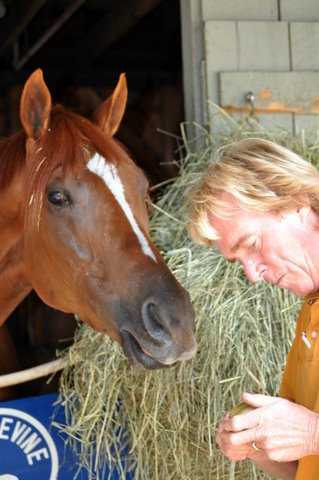 Everything New Yorkers do, we do with profound depth: we believe, we love, we suffer, we rise again, we have faith–we lose faith, and get it back again. Sometimes all within the space of a New York Minute. I’m not saying that people from other regions of the United States or the world are lacking in these survival skills, this resiliency.
I’m saying, merely, that my heart has found its suspicious, cynical, emotional, loving, smart-mouthed Home on the creaky floorboards–the tiled paddock patios–the finish line rails–no where else but at race tracks in the state where I was born. The same Wisdom that taught me to suck it up when it gets cold, is on Page One of The Survivors’ Handbook: we New Yorkers know that the proverbial race will go on.
We are nothing if not a team of Existentialists–thousands of self-proclaimed individuals, each doing our own thing–yet all connected at the heart, at the spirit–at the core of our very, collective, being.
Maybe New York State’s revised motto should be:
“Suck it up. Then, C’mon Over Here and Give Me a Hug.”
New Yorkers: we live, we love, we cry, we rejoice–all with great passion. Many people from
other parts of the country and the world are uncomfortable with that. Other people crave that crazy soul–and we invite you into our moonstruck-esque family. 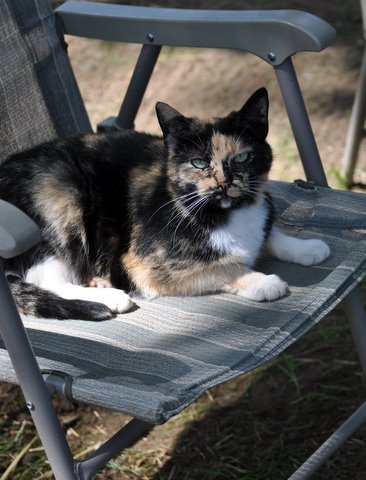 Yes, I think that the finest thing about being a member of the New York horse racing community is this: we welcome everyone to join in. It’s like Sunday dinner in an Italian household: pull up a chair, there’s plenty to go around. There are horses to admire, cats to cuddle and new friends to acquire.
And, even though it would be cool if willingly, you took the Aqueduct Nose-Freezing Test–we won’t force you to stand outside ’til your lips turn blue when it’s -50F. We’ll call you in before anything of value drops off into the deep, thick, white New York Winter.
Promise.
😉
PHOTO CREDITS:
* Tom Williams, One Way Bruce and a Kiwi and
* Patches the Cat at Joe Aquilino’s Barn, both courtesy of Cathleen Duffy.
* All other photos, courtesy of NYRA/Adam Coglianese.