Today we media folks received the full run-down of all the activities that will take place on August 3, 2013 at Saratoga Race Course.

But August 3, 2013 happens to be the exact date of the founding of horse racing in this practically-holy spot, 150 years ago. The Civil War was raging in Gettysburg. My Grandpa, Charlie Gardner was shot in the hand in that battle. And 365 miles north, in the town of Saratoga Springs, New York–not too far from Grandpa Charlie’s home–horse racing in America had found a permanent home.

(No doubt, Uncle Charlie would’ve rather been in Saratoga than Pennsylvania that day.)
So August 3 is the actual birthday of our beloved track in Saratoga. From those hopeful beginnings grew the most magnificently beautiful race track in the world.
The prestige and power of racing in Saratoga cannot be overestimated: to have Saratoga on your racing resume, means that you’ve arrived.
Come with me to the list of events that will transpire tomorrow, and get excited.
Get horse-crazy with excitement.
Decide that–whatever else you had planned–just isn’t important. It’s not often that everyone on Earth is invited to participate in an historic moment. Wherever you are, however you get here–get here.
Saratoga Race Course has donned her best party dress–we’re celebrating the grand old grrrl–and you’re on the guest list… 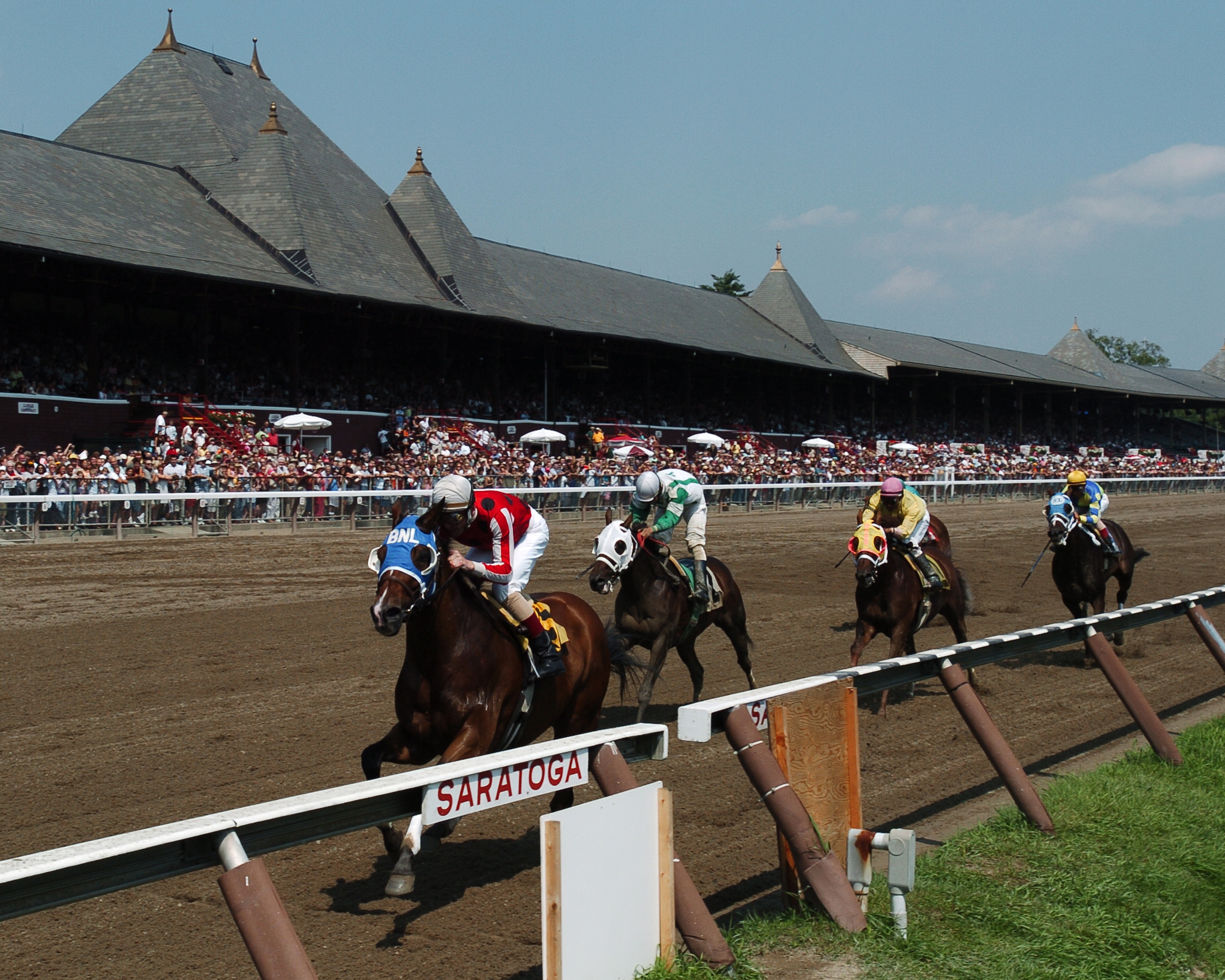 This is the media alert I received today: rather than try to re-write it, I’m posting it almost as-is. But you know me, I’m sure that some comments, perhaps even witticisms, will show up. (You’ll know them, if you’ve figured out my writing style.)

Sans further ado, I present your schedule for tomorrow:

WHAT: The New York Racing Association, Inc. will host a series of events and activities to celebrate the official 150th anniversary of racing in Saratoga. This party is celebrating our grand old grrrl, but it’s all for you–for us–for the fans and lovers of our storied track.

Coinciding with the running of the Grade 1, $750,000 Whitney Invitational Handicap, Saturday will formally commemorate the 150th anniversary of the first organized four-day race meeting in Saratoga Springs which commenced on August 3, 1863. If you stand stock-still for a moment anywhere in the building or these grounds–you can feel it. You can sense the horses who raced here 150 years ago, and all the greats who put down their hooves on this unique place. Feel the spirits of horses and their humans? Me, too.

DETAILS: Saratoga Race Course will celebrate its official 150th anniversary with a day of exciting events and activities to commemorate the sesquicentennial.

6 to 10:30 a.m. The Whitney Viewing Stand will open to the public for morning training. Overlooking the Oklahoma Training Track, the Whitney Viewing Stand offers the public the opportunity to view the morning workouts at Oklahoma for the first time in more than a decade. The viewing stand is named in honor of one of Thoroughbred racing’s most prominent families and dedicated patrons, the Whitneys. I saw it yesterday: it’s historically accurate, and incredibly beautiful. Not a wall of bleachers–this ain’t no high school basketball court, folks, this is SARATOGA at its finest.

10 a.m. Celebratory music will greet fans as they enter the Clubhouse and Union Avenue entrances.

10:30 a.m. (Gates Open) Fans in attendance Saturday will receive a free commemorative Saratoga Sesquicentennial poster designed by equine cartoonist Pierre E. “Peb” Bellocq. The poster features legendary figures from the past 150 years at Saratoga and is free with paid admission, while supplies last. This is huge. If you don’t know the legendary PEB, look him up on Wikipedia. He’s as much a part of horse racing as Alydar. NYRA is giving guests at the track an amazing gift here. Trust me, you want one of these. (NO, tell your friends that they may not sell it on eBay–what kind of Visigoths are they?)

11:30 a.m. Award-winning a cappella women’s chorus Saratoga Soundtrack of Saratoga Springs will perform a special rendition of the National Anthem in the winner’s circle. O, say, can you see…the spirit of Kentucky, the first horse to win the Travers, in 1864.

2:30 p.m. Congressman Paul Tonko will present an official proclamation in honor of the 150th anniversary following the day’s fourth race in the winner’s circle.

3:00 p.m. The Preservation League of New York State will present The New York Racing Association with a commemorative plaque in honor of the 150th anniversary following the day’s fifth race in the winner’s circle.

3:35 p.m. The day’s sixth race will be named the Saratoga Sesquicentennial in honor of the 150th anniversary celebration. Jockeys participating in the race will wear commemorative red and white “holder caps” to honor the era in which the first meet was held.

City of Saratoga Springs Mayor Scott Johnson will also deliver an official proclamation in honor of the 150th anniversary.

3:40 p.m. A special ceremony in the winner’s circle will include a formal cutting of the specially designed cake from Buddy Valastro of Carlo’s Bakery, the setting for the popular television series “Cake Boss.” The cake, designed to replicate the historic track, is 4-by-4 feet and nearly two feet high. Saratoga Soundtrack will also return for a special rendition of “Happy Birthday.” I expect you to be there, and to sing along, as will the thousands of others of us…

5:35 p.m. The first participant in the $15,000 win wager contest – Kevin Brockley of Gansevoort, NY – will place his wager with a mutuel clerk in the winner’s circle. The contest is sponsored by Marylou Whitney and John Hendrickson, honorary chairs of the Saratoga 150 Committee. Good thing I didn’t win that fifteen-grand: I’d blow it on the longest shot on the board. 😉

5:45 p.m. For the first time in the history of the Whitney Invitational Handicap, a special custom-designed horse blanket, made of Marylou Whitney pink roses, and a new permanent, sterling silver, three-handled chalice trophy will commemorate the historic Grade 1 race. Mrs. Marylou Whitney is the epitome of grace and generosity. Her participation in the Whitney–and in everything about this 150th celebration–is a gift, pure and simple. Mrs. Whitney, herself, is a national treasure.

Additionally, the track décor and atmosphere will assume a Victorian flair, underscored by a period Freihofer’s coach from the 1800s positioned outside the Clubhouse gates and characters dressed in Victorian-era costume strolling the grounds.

If you’re a race fan–a REAL race fan–you must be there on Saturday, August 3, 2013, as Saratoga Race Course is honored on her 150th birthday–or regret it for the rest of your Life. That’s a pretty simple message, now, isn’t it?