Come join us for an evening of fun and fellowship on Friday, August 16th in the Courtyard of The Inn at Saratoga, from 5PM – 9PM. Show your support for an amazing organization dedicate to animal welfare, and to promoting low-cost spay/neuter services. Check out our display on “The Oklahoma Cats,” our program with NYRA and a benevolent horse owner, to care for the feral cats at the historic Saratoga Race Course.
Tickets for the Raining Cats and Dogs Gala are $40 per person ($45 at the door), and include wine an beer tasting tables; a light fare buffet an live music. In the spirit of racing season, place your bi on one of our amazing Silent Auction items!
If you love animals and want to show your support, this event is not to be missed!!!
So on the surface, it sounds like another nice social event during the hectic Saratoga racing and social season. And on the surface, also, it may not seem to be related directly to horses or horse racing–or does it? Read on, O Friends, and I’ll explain to you why you should attend this party. If you don’t do anything social the rest of the Saratoga meet, this is all you need to have fun, spend hardly-a-thing, and do tremendous good for a population that’s rarely considered…

Indulge me, please. Allow me to paint a picture for you…

We’ve all seen the adorable photos of horses in barns, especially at racetracks. In these “Awwwww” photos, the huge, hulking, 1200-pound Thoroughbreds are standing or lying down, often with one of their companion animals in reference to the massive equine. 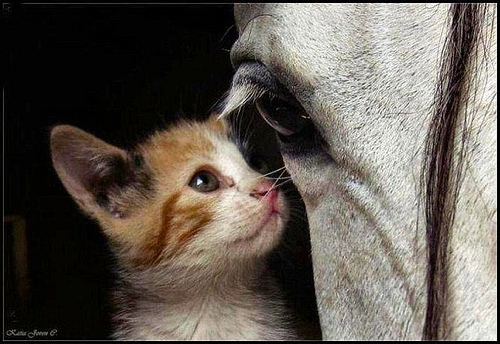 It’s the size and extreme musculature of the horse, in comparison to its companion animal, that gives the photo the “Awww” quality.
Sometimes it’s a goat. Other times, dogs. Some tracks have chickens running around, like so many little busybodies, pecking and yawking.
But all barns, whether on a racetrack or a farm–have cats. You see the sweet photo of the horse and her kitty, and you Like it on Facebook. You think,
“How sweet!” but really, admit it–after you Like it–you never give it another thought.
How did the horse and the cat get together? 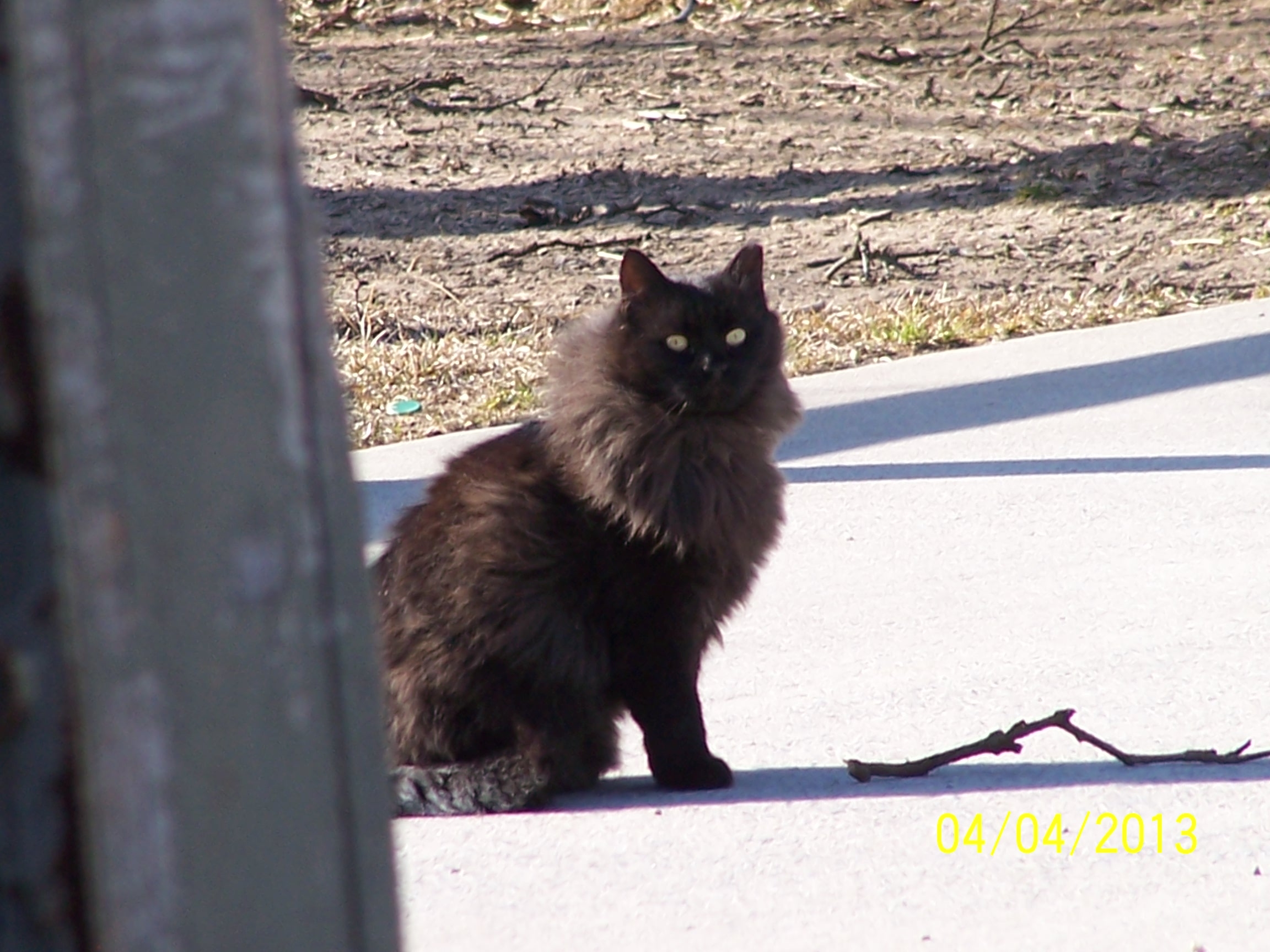 Whence came the kitty? (FYI: They don’t just spontaneously rise up out of the straw bedding.) Did they just wander over from yonder hill, and decide this was a good place to hang out, and wow–there’s a big horse to befriend!
The fact is that every barn in every city, town and state around the world has cats. They’re working animals: those cats are best friends with the horses, but they’re much more than that: they’re mousers. They keep the mice at bay, and therefore, keep rodent-borne diseases from the horses, humans and other beings. (I confess that I always take pity on mice–so tiny, with beady little eyes-– and think that they’re cute. But I do realize that they carry some nasty bacteria and viruses.)
Kitties in barns have jobs, and they’re great snugglers. 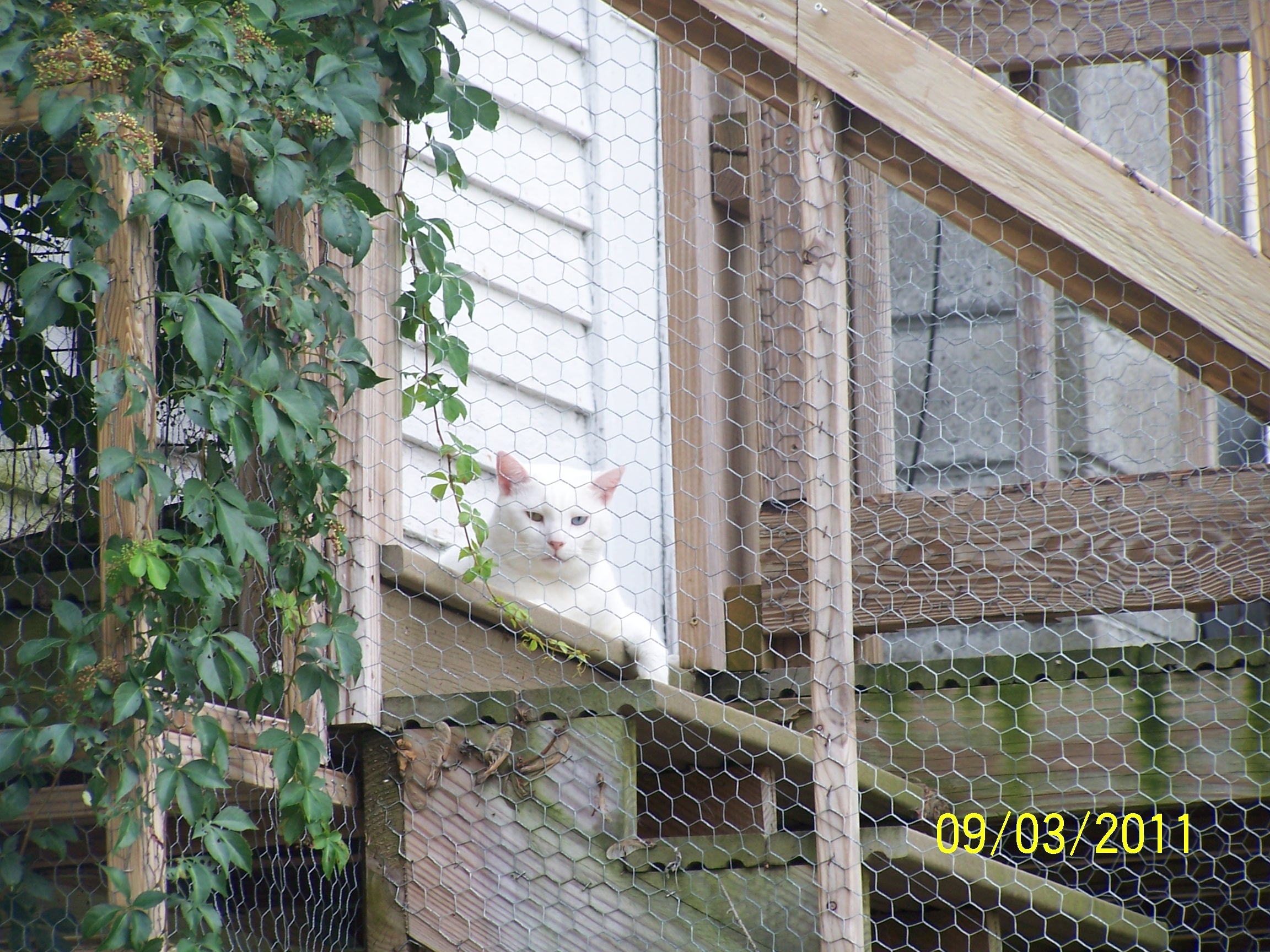 The horses are happy, the cats are happy, the mice are dead.
And then racing season ends. Everyone moves to Belmont, Aiken or Ocala.
The mice still are dead, and the cats…what?
Get jobs in town?
Are hired to wash dishes at the Mexican Connection?
Move into a condo on Railroad Place, and hunker down for the Winter?
No. 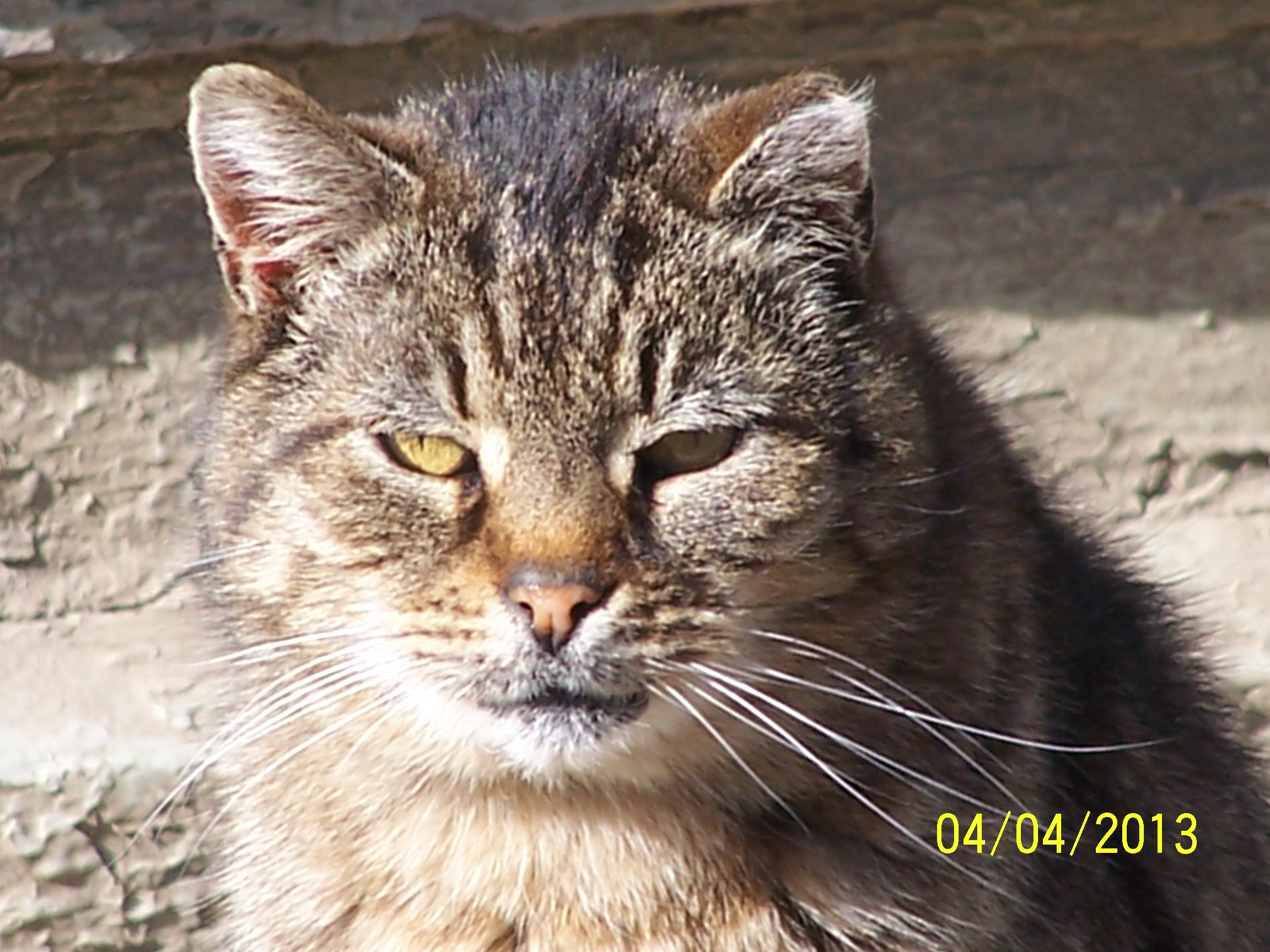 The sad truth–a truth with which I wrestle–is that many of the lovely human beings who work so hard with horses–who love horses unconditionally and absolutely–who take their dogs south with them in September or November--abandon the cats.
Cats, it seems are expendable.
If I could, I’d round up every abandoned kitty on the track–on every track–and take them home with me. (This would be a quick way to achieve one of my Life Goals: to become a crazy old lady with 50 cats, a black bee-hive hairdo and smeared, red lipstick.)
Enter Quaintance House. 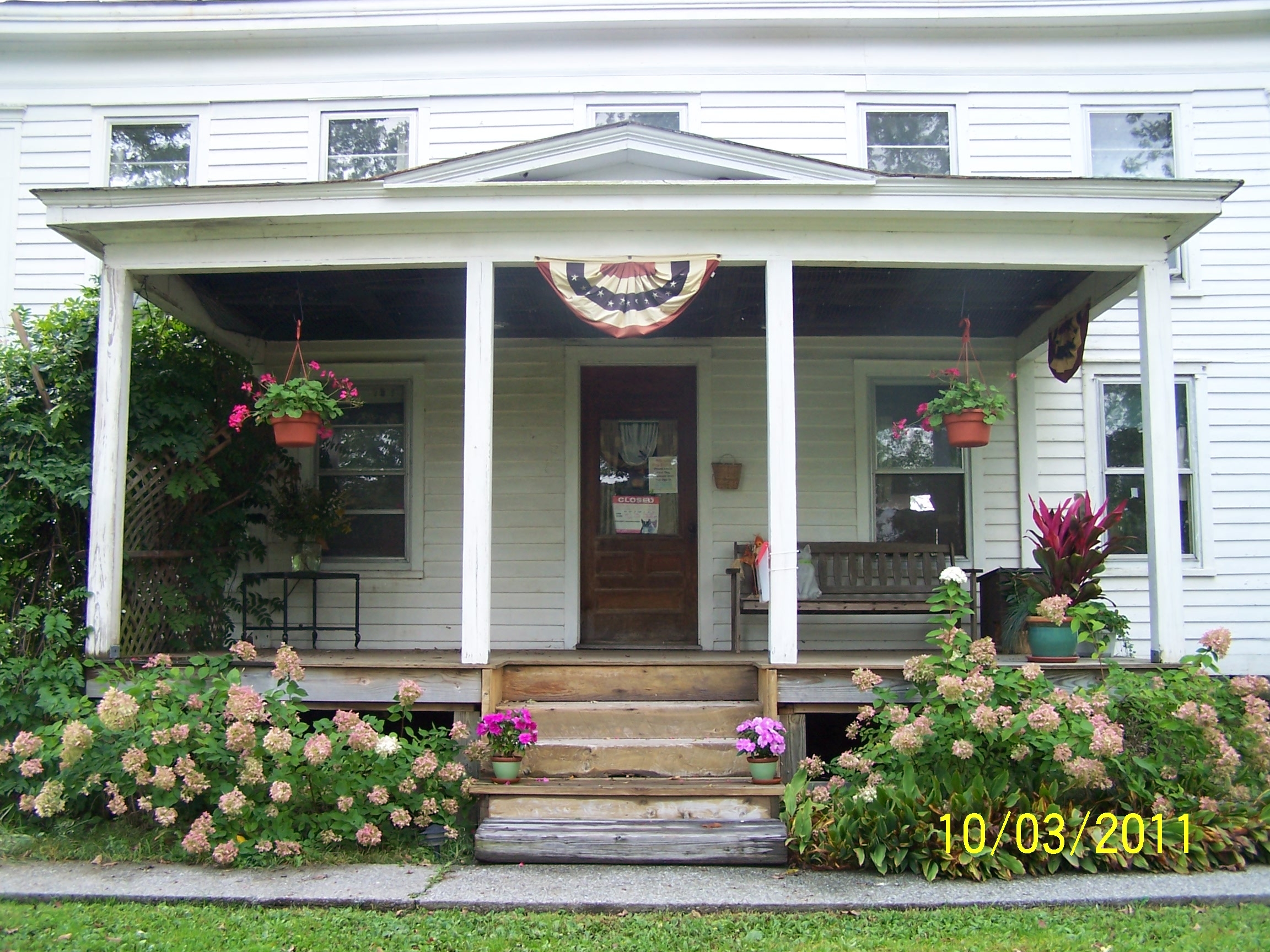 Now, I can’t go into every mission of Quaintance House, or this article would become a book. And I know that most people who read on the Internet have the attention span of a fruitfly.
So I need to cut to the chase and tell you why you should attend this party–and how barn cats play into it. But I want you to know that Quaintance House is in Greenwich, New York, and was founded in 1992. They realized rather quickly that the job of rescue is never-ending, because (FOR WHATEVER REASON)–and this is MY own wording, not theirs–people continue to be irresponsible, and won’t spay or neuter their pets. Then they get sick of the pets, or for some other reason one cat turns into 492 cats, and people get tired of them.
I don’t understand the psychology behind the cruelty of abandonment and irresponsibility of not neutering or spaying. These harsh words are mine, not those of Chris Boudreau and her husband, founders of Quaintance House.
But they did realize quickly that rescue is a never-ending job, so they chose their battles carefully: Quaintance House is a nonprofit organization with a primary goal of health improvement which includes:
Spaying/Neutering
Vaccinating
Diet
Quaintance House provides more services and love than I can describe here–I urge you to visit their website, and to give generously. (I’ve already written far more than most Web readers can digest without getting twitchy.) But I ask that you keep reading for just a few minutes more–look at the pretty pictures, too–because here’s the thing:
Quaintance House is the only organization of which I’ve ever heard that works with a racing organization to round up, vaccinate, spay or neuter–barn cats. I’m sure that, when they can, they help the kitties hook up with humans who will love them and give them their Forever Homes.
Yes, NYRA–the organization that gives us the world’s greatest horse racing and all its elegance, pomp and beauty–works with Chris and Ron Boudreau and their team to reach into every nook and cranny, every stall of the Saratoga Race Course to aid and bless the cats who are left behind after the tourists, the madness, the money of racing season is over. Vaccines, spaying, neutering–caring for those left behind, because it’s the right thing to do.
NYRA–cares about kitties.

The anonymous, benevolent horse owner credited in the invitation–cares about kitties.
The shared mission of NYRA, the benevolent benefactor and Quaintance House is to assure the health and non-reproduction of barn cats–is a gift to the community. In fact, it’s a gift to Saratoga Springs, itself, and Saratogians should be grateful, to think that someone is looking out for the animals left on your figurative doorstep after the races have left town. Saratogians should be throwing money at Quaintance House–and writing Thank You notes to NYRA–for caring for animals who cannot care for themselves. (Saratoga is often cited as being a city that cares–shouldn’t Saratogians care about the barn cats, too?)
So, as I say so oft–here’s the deal. You have the chance to throw money at Quaintance House AND get something in return–a groovy party. All the aforementioned food, bev, silent auction opp and live music by John Guay and Vonnie Estes. The wine tasting is hosted generously by Crush and Cask Wine and Spirits. (I love Patricia Pendergast Novo, such a kind soul.) Oliva Vineyards is giving of themselves, as well. God bless them. Beer tasting will be hosted by Olde Saratoga Brewery, God love ’em.
When–when, I ask you?–when this year will you have the chance to party it up in Saratoga–help a righteous cause, a cause that touches the heart–AND pay 1979 prices for the privilege? Forty bucks–forty-five at the door–is, by far, the Best Deal in Town for the 2013 Saratoga racing season.
You cannot pass up this practically-free chance to eat, drink and schmooze–and by so doing, bless OUR backstretch cats.
What else are you going to do with that forty bucks? Blow it on tip sheets written by 12-year-olds?
😉
—————
To reserve your tickets, call
Chris Boudreau at Quaintance House:
(518) 692-9848
letstucketinn@dishmail.net
www.quaintancehouse.com

OR just show up on Friday, August 16th between 5 and 9PM, and pay $45 at the door.
Photo Credits:
All photos courtesy of Quaintance House, except:
Horse and Cat, courtesy of MormonGirl.Undone. Thank you!
NOTE: This cat is not a homeless barn cat. This is my indulged Bundle of Love, Pandora, expressing joy because she just heard that you’ll be at the party. <3 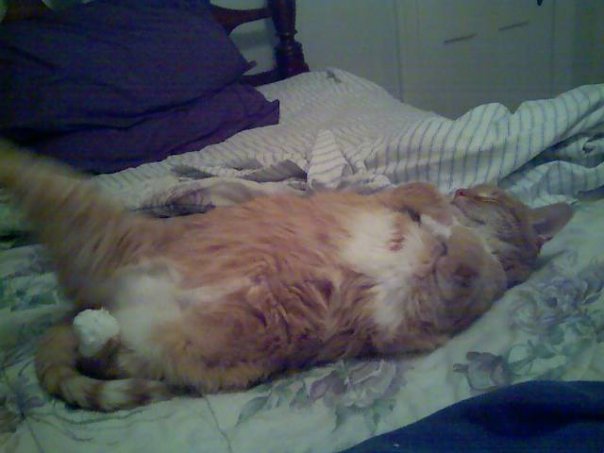