This is just one of 30,000 letters you’ll receive from admirers–don’t worry, big boy, I don’t expect you to write back. You have fans from all over the world, and I’m just one little person who loves you. But even though your new stall at Adena Springs is probably covered in cards and gifts, still I feel compelled to write to you and tell you how your life and journey have affected my own.
You just retired from horse racing, and I wish you well. You turned six in June–you’ve raced for over half your life to-date,and you earned your way into the pantheon of Great Horses. I wept buckets when I read the news, and sporadically through the night every time I read your name. It was as if water was just falling out of my eyes, with no shut-off valve.
I had to sit down and pinpoint the reason why I’m so touched by this announcement.
First, I don’t want to be selfish: I wish you a beautiful life working at Adena Springs, and many perfect, swift babies to carry on your legacy. Perhaps one day I’ll be able to buy one of them, and have a bit of you for my very own. Of course, for me to be able to buy a 3M baby would mean that my own career would soar. And that is where our life paths cross: my life and your true legacy, Macho. (May I call you, “Macho”?)
The reason for my crying is entirely selfish: you’ve been a partner to me during life’s ups and downs for several years now, and I am so sad to lose you…

Your career has been the subject of many fine factual articles by the best turf writers in the world. Everyone who loves our sport knows the things that you achieved in your racing career.

Not all your victories were on a race track, but all your racing victories lit fires in the hearts of your fans. Just a few months ago, you nailed the Awesome Again Stakes, then the Breeders’ Cup Classic. Those were extraordinary races, and thrilling beyond description.
Your Breeders’ Cup Classic victory was named the NTRA’s Moment of the Year in January, 2014. Truly, it WAS The Moment of 2014–the moment that gave more goosebvumps and tears to more lovers of this sport than any other.
You won the Secretariat Vox Populi Award. You were elected unanimously by fans, voting online; by the Vox Populi committee and by Penny Chenery, herself. Your life and example touched all of these people. You are so loved, but not because you’re a “pretty horse.” “Pretty horses” don’t nestle into the human heart. I call it soul–others may call it guts or tenacity: you are an inspiration to so many humans–humans who sorely need a hero. I am but one of these broken people.
Humans, like you, have at least two sides, Macho: the one side–that which is invested in a race horse as strictly a horse who is racing–measures success at the teller’s window.
The other side–dare I say, the spiritual side?–measures a horse’s success in chills and tears. In your NTRA Moment of the Year, your fans cashed in, in spades.
But I think that my favorite moment in your career was when you stomped on the competition just because you could, and took the Florida Sunshine Millions Classic–your second win of that race. We all cried as you romped toward home, 14 lengths ahead of the field. But again, I had invested something more precious than gold in you that day. 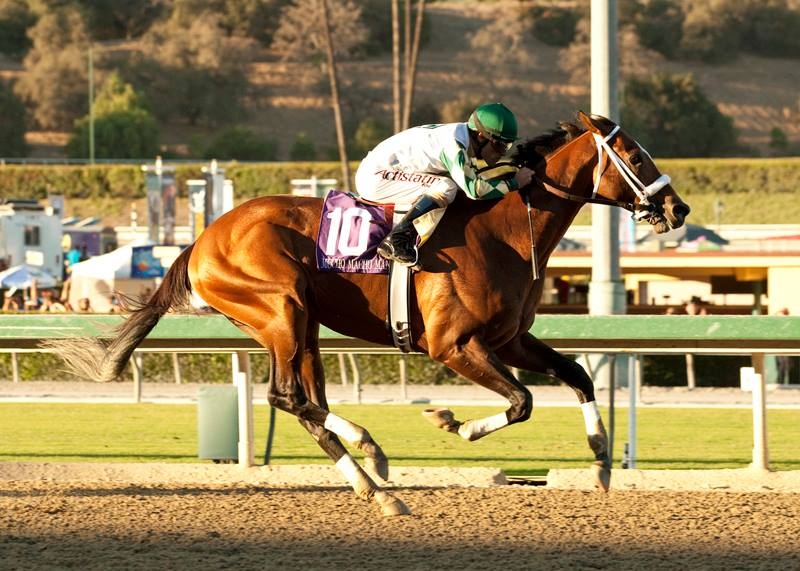