This piece is about two things–related, of course.

The first is a wonderful piece of news about Longines and the Breeders’ Cup. If you read my writings regularly, you’ll suspect (correctly) that the spin I’m putting on this delightful relationship goes beyond the concept of corporate sponsorship.
And the second part of the article–about Longines’ gorgeous new watch–I’ll share my thoughts on the concept of SEXY. I hope you’re intrigued. If so, here we go…

This Friday and Saturday, the Breeders’ Cup will showcase many of the best race horses in America, and some of the world’s greatest, as well.

Longines, the premier watch company–I’m a big fan–has announced that the company now is the Official Partner and Official Timekeeper and Watch of the Breeders’ Cup World Championships.
The world-renowned Swiss watch brand will also be the Title Partner of two of the highlight Breeders’ Cup races, namely the Longines Breeders’ Cup Distaff race (Friday, October 31st) and the Longines Breeders’ Cup Turf race (Saturday, November 1st).
So what does this mean to you, the average horse race fan?
To you, the bettor?
How does Longines’ relationship to the Breeders’ Cup affect your life?
At first, you may think, mistakenly, that it doesn’t.
But, oh, it does.
First, a moment to ponder three friends: Physics, Religion and Culture.
Time, you see, exists as the fourth dimension. This is the Physics view.
To most believers in the Divine, Time does not exist in the Eternity in which God resides, or through which God moves.
In Western culture, Time is linear--that is, it moves forward. Yesterday, today, tomorrow.
But in cultures defined by religio-philosophical thought (e.g., Hinduism/India)–Time is circular. (Think, reincarnation.)
We could spend days discussing the cultural construct of Time, and why it’s important to humans. And I do advise that, if you’ve never thought about it seriously, you take the…Time…to think about the concept. It’s much deeper than the occasional glance at your smartphone to see if you’re late for work.
Time is a huge concept. Enormous, and yet too-often dismissed. Debated by philosophers, physicists and theologians since the first person noticed the sun, seeming to move and Time, seeming to pass.
But if you’re a betting person--if horse racing for you is a sport in which you’re invested emotionally and financially–Time is a very, very important concept.
Winners of a horse race often are determined by fractions of a second. A nostril may flare–a nose-hair may cross the wire first–and that 1/100th of a second can determine next year’s Horse of the Year.
In our sport, records are made and records are broken, all because of minute fractions of a second.
So yes, to you–to me–to all of horse racing--it is of extraordinary, supreme importance that Longines is the Official Timekeeper and Watch of the Breeders’ Cup. If, God forbid, an inferior timekeeping company was responsible for those incredibly small fractions of a second–entire races could be thrown off. Races would have to be invalidated, and stewards’ decisions vacated and millions of bettors, appeased–f the timekeeper couldn’t keep up with the very seconds that may separate the Champion from the horse who places.
So I’m grateful that Longines has taken on this tremendous, almost cosmic, responsibility. We all can bet, watch and enjoy the Breeders’ Cup races, knowing that there will be no mistakes, no glitches. That the Times declared for every race, for record-breaking races, will be as perfect as any human can establish.
If you see anyone from Longines or the Breeders’ Cup this weekend, please thank them for creating the environment in which Time, the great and hotly-debated Unknown–is harnessed and used to help write the history of horse racing.
Now, on to Sexy.
First, I’ll share one of my secrets with you. I have an almost obsessive attraction to two very physical items: pens and watches.
Ever since my teenage-hood, I’ve admired and craved beautiful pens. In those days, the only good pens a lower-middle-class teenage grrrl like me ever even saw was a Cross pen that an occasional teacher may possess. So yes, in high school when other grrlz were lusting after the football captain–I was coveting my English teacher’s Cross pen. And his watch.
Call me weird, but my attachment to pens and watches kept me from making out with jerks. While my friends were looking for validation in the kiss of a teenage boy, I was rifling through pages of magazines to find photos of pens and watches that Someday I would possess. My friends wore Mickey Mouse watches, and I thought they were idiots because they didn’t even know the difference between a watch that featured a mouse with no shirt, and a truly extraordinary timepiece… 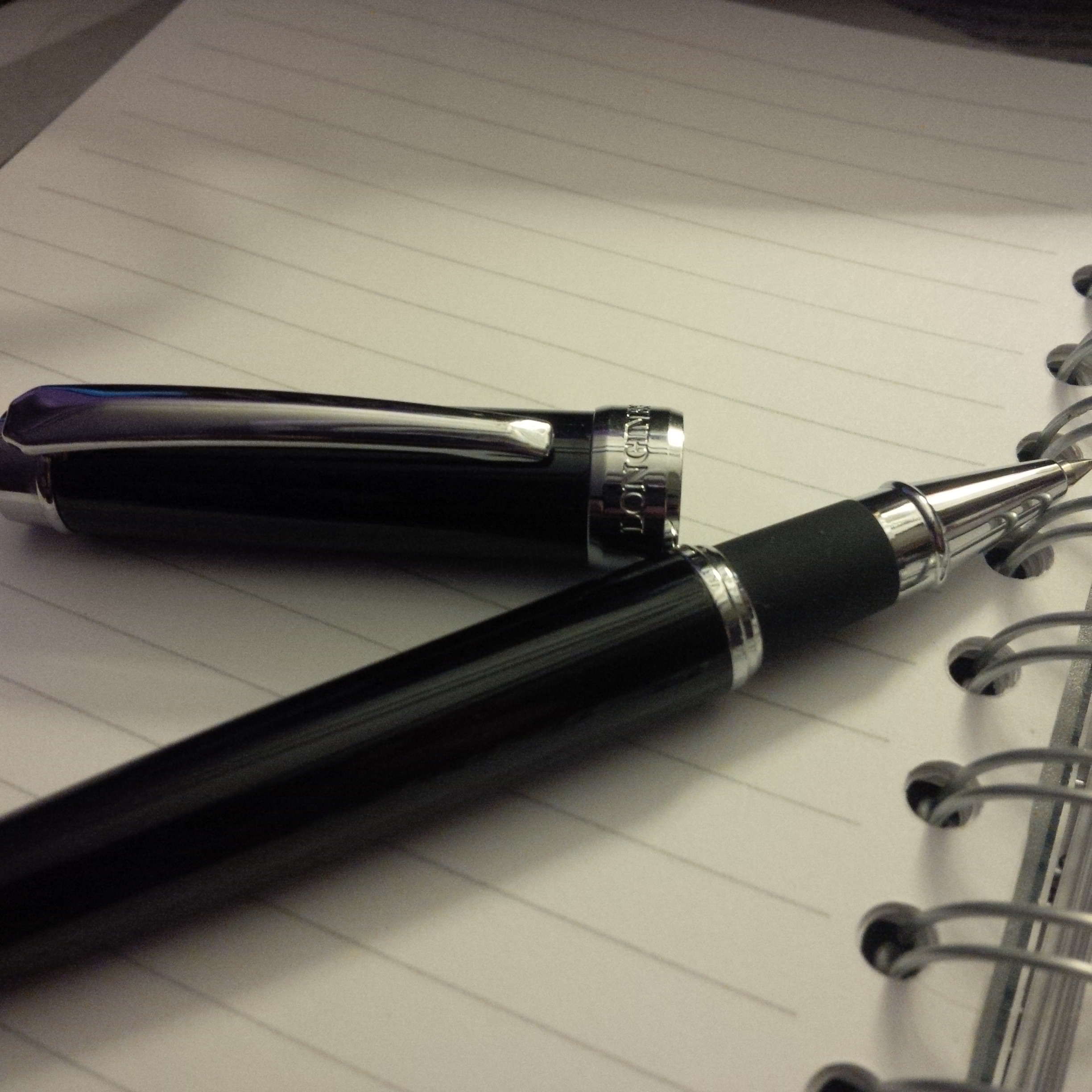 Fast-forward to 2012, when I was gifted with my first-ever world-class pen, a Longines ballpoint. I don’t mind sharing with you that I nearly had a stroke. The smooth, pitch-black ebony and chrome of the instrument sent me into a heavenly place. I keep that pen in her box, and on special occasions carry the boxed pen to use. In each of the two years since, I’ve received pens from Longines, and those two join my original in the Dubai World Cup mug on my desk when I’m not using them. Just so I can look at them, every day, and smile.
Now you probably think that I’m utterly insane. But as I think about it, I’ll bet that at least some of you understand–otherwise, companies like Longines wouldn’t even make such finely-crafted instruments. Why bother to make high-end pens, if pens are only functional and Bic exists? So perhaps my attraction to the smooth, beautiful lines of my Longines pens isn’t an odd bit of my personality, at all.
Sexy + Elegant = Longines Conquest 1/100th Horse Racing Watch 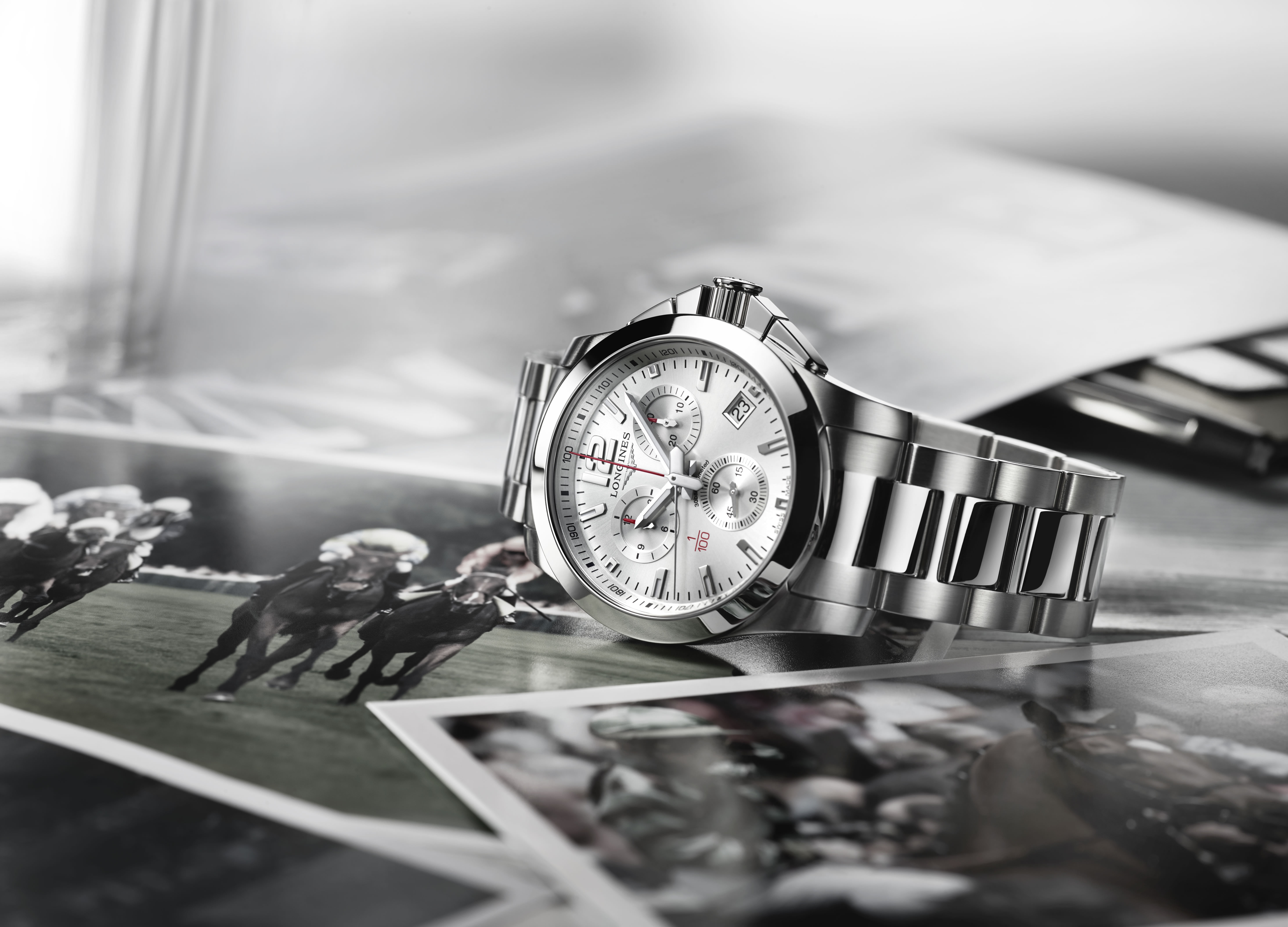 And my passion for watches. I’m a freak for watches because they’re sexy.
There’s trashy and ridiculous, and then there’s genuinely sexy.
Too many people confuse those concepts these days. Real sexiness comes from a place of deep self-confidence, tempered by beauty and elegance. Rabid, frenzied dancing does not make one sexy: a smooth, focused, intentional gait does.
Lauren Becall was sexy.
Clark Gable, Cary Grant–sexy.
Those who are truly sexy know that revealing all of one’s body parts is NOT sexy, but that the appeal comes from within.
It’s what’s inside that makes the outside beautiful, and really hot.
Watches and race horses are sexy, a genuine external expression of their internal workings.
Humans can be sexy, too, but it takes some work for most humans to realize that it IS the internal that delivers the external.
Simon Baker is sexy. Simon Baker is elegant. That Tasmanian devil (actor) is probably one of the sexiest men alive–if not the actual title holder. And he’s sexy precisely because he IS the epitome of elegance. The two ideas are synonymous. 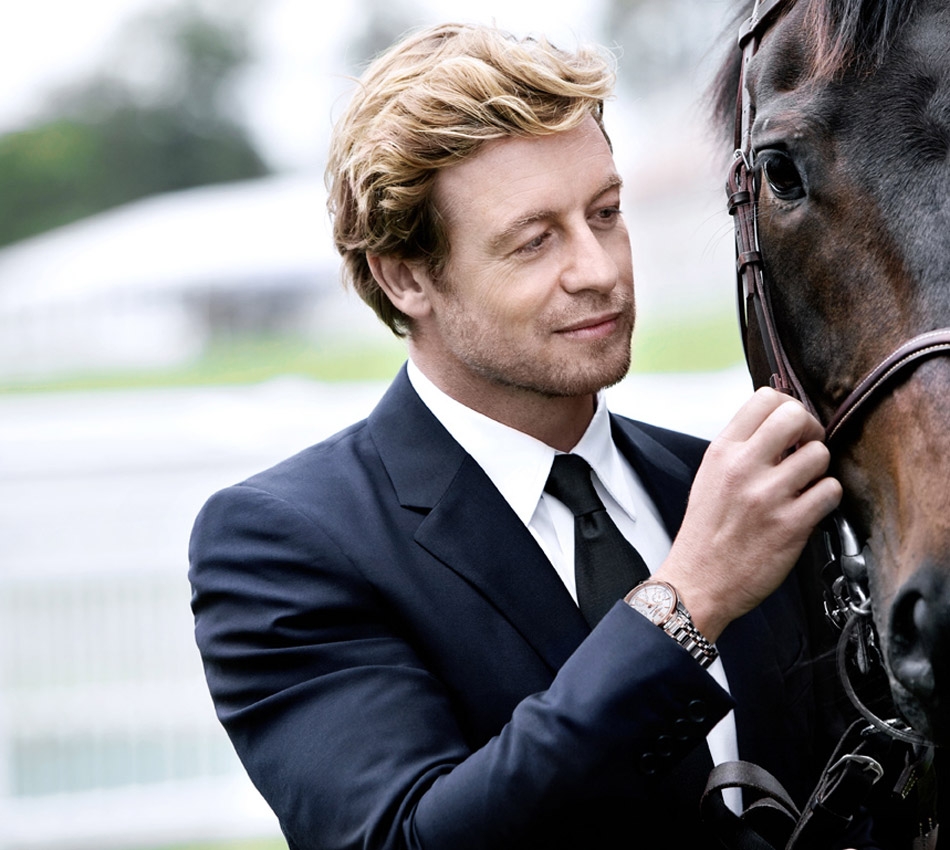 In fact, Mr. Baker is Longines’ Ambassador of Elegance, and will be present at Santa Anita on Breeders’ Cup days. In keeping with his title, no doubt he’ll be attired in a couture suit–something perfect, smooth and quiet. (Elegant/sexy people don’t wear beer hats.)
And no doubt, Mr. Baker will wear the newest, most wonderful member of Longines’ stable, the Conquest 1/100th Horse Racing watch. (See photo, above.)
The “1/100th” in the watch’s very name indicates that, yes, Virginia, this extraordinary timepiece is accurate to 1/100th of a SECOND. (Also known as a Centisecond.) As we discussed above, hundredths of a second ARE important in the sport of horse racing. The notion that not just stewards, but anyone–including we, the fans of horse racing–can own such a scientifically, physics-ally accurate timekeeper is an idea that’s just too wonderful to be true.
In other words, you don’t have to be a racing official to own a Longines Conquest 1/100th Horse Racing watch. You can time the races, yourself. You can measure important events in your own life off the track, in a far-more accurate manner than that of glancing at the digital clock on your smartphone.
The only caveat about owning this watch is that you may be so distracted by its smooth, silken beauty; so enchanted by its cool metal on your wrist and fascinated by the dials and hands on your beautiful watch that you’re late for work.
And that would defeat utterly the purpose of owning such a phenomenally-accurate timepiece, wouldn’t it?
Watches are sexy because they’re organic: the metal of the watch makes contact with your skin, and the nerve endings thereon. From the first moment it’s on your wrist, you two form a sensual relationship.
They keep us grounded, feet firmly on the Earth while our heads and hearts soar skyward.
They’re sexy because of–here’s that idea again–because of what they have inside, and that inside determines how they’re designed on the outside.
The form of a watch, like humans, is determined by its functionality. Like a race horse, form does follow function: the inner workings make the outside skin beautiful and sexy.
Watches are sexy. Simon Baker is sexy. Longines has just presented the world with that which is probably The Sexiest Watch on Earth.
If you’re fortunate enough to be at the Breeders’ Cup this weekend, check out the Longines Conquest 1/100th Horse Racing watch.
If you plan to watch from your home or elsewhere on Planet Earth, you might want to go to www.Longines.com before Friday, to get your own Conquest 1/100th Horse Racing watch. That side bet you make with your comrades may well be determined by the accuracy of someone’s watch.
If it’s not your Longines, well, don’t blame me if you lose that bet.
—————————————————————————————
Media Credits:
Longines/Breeders’ Cup logo and photo, Longines Conquest 1/100th Horse Racing watch, courtesy of Longines/Jamie Hector.
Photo, Longines pen, Marion Altieri.