Visit Saratoga.com For Everything Saratoga
Enter Giveaways Advertise
Note: Saratoga.com is not responsible for posts and comments written by non-staff members.
Home  »  Phish  »  Thoroughbred Racing in a Different Light

It all happened rather quickly.

When we got word that yesterday’s fifth race was taken off the turf, I had to call NYRA back and speak to someone else, just to get the information confirmed.  It was confirmed.

I bellowed to my girlfriend, Stacy.

“THEY’RE OFF THE TURF!  GET SHOWERED!  WE’RE GOING TO SARATOGA!” 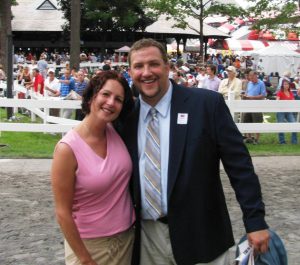 And just like that Runaway Jim, who was entered for the main track only, gets his first start at Saratoga and we had a 200+ mile road trip ahead of us.

A three-year-old gray gelding by Freud out of Miniconjon, he is owned by Seabrook Stable.  This was his third attempt at breaking his maiden.

The Seabrook Stable is the perfect example of the bread and butter that make horse racing viable.

They are a group of friends and family members, each with a financial and rooting interest, in a small number of racehorses.  They are one of hundreds around the country that keep the business going.  Ask any racing official, without the owners we’d all be selling hot dogs on street corners.

They make the game affordable and it is professionally run with solid communication amongst their owners.  The possibilities for future endeavors with additional horses are realistic and the thrills that come with ownership are, in a word, indescribable.

Although nicknamed Marshmallow in his barn – not the most competitive or intimidating of nicknames, I grant you – Runaway Jim is no softie. 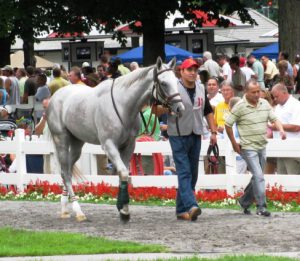 Upon his entrance into the paddock yesterday Jim came in fit, ripped and professional.  We saw him twice at Belmont before this; once looking on his toes and interested in all around him, the second not as focused.

Sunday he was a new man of sorts.  He knew what he was there for and he had his mind on his business.

If nothing else his appearance in the paddock was encouraging and fed an already growing enthusiasm that – speaking only for myself- was already hard to keep composed.

Do you have any idea – any idea at all – the feelings that flood a person when watching your horse in the paddock at Saratoga Race Course?

Well, neither do I.

But as the boyfriend of an owner who watched it beside – and vicariously through the beautiful brown eyes of – my Stacy, I can assure you it was overwhelming.

Now I will make a public admission that some already know about me … I am a wuss.

I am a grown man who stands six feet and one inch, two hundred and -don’t-you-worry-about-how-much-more-than-that pounds, who is a big fat baby…when it comes to racing.

When it comes to racing, there’s no sport I love more.

When it comes to racing at Saratoga, there is no place I would rather be.

As Stacy and I strolled the walkway into the paddock she put her arm inside mine, gently grasping the inside of my elbow.  Her timing was perfect.  Whether she knew it or not an emotion was running thru me I had never felt.  It was all I could do to keep composed.

I had not walked into the paddock at Saratoga before and I think of it now as a coming of age experience.  The kicker though is this:  he isn’t even my horse, for heaven’s sake!

Jose Lezcano gets the leg up from the assistant trainer; they circle and head out onto the track. 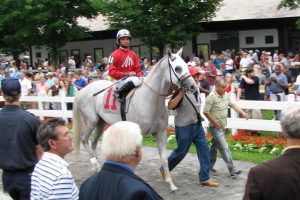 When we watched Jim make his way to the track and we headed to our boxes in the Clubhouse, my knees got weak.  My stomach ached.  My arms felt heavy and I was repeatedly reminded to breathe.

They loaded the gate.  Jim went in easily.

Those extra mornings at Gate School seemed to have helped.

Some other horse got fractious and had to be backed out. 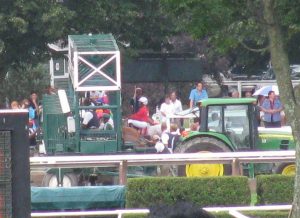 Stacy and I, however … well, we were a wreck.

They sprung the latch and Jim broke well from the nine-hole, inching his way closer to the rail along the backside.

My heart went in my throat.  Stacy’s pounded through her chest.

What a pair we were.

At the three-sixteenths pole we saw him move.  We noticed something different about him…he wasn’t looking all over the place this time.  Wearing half-cup blinkers, Jim had his mind on his business and was racing like the professional we saw in the paddock.

He was focused.  He was driven.  He ran his heart out.

You don’t ever – and I mean ever – ask for more of a horse than that.

He ran as well as we could have hoped for, but there was no catching the winner, Fiddler’s Chaparito.  He was just too good that day.

Marsh Haven finished well to earn the place spot, half a length ahead of Runaway Jim who was a good third. 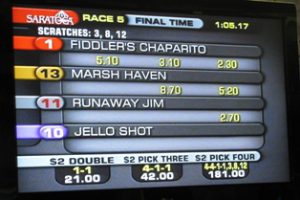 Now, here’s the thing.  I reckon winning isn’t everything.  Sure, it’s a sight better than losing, but to run a horse, get a good run out of him, hit the board and come out of the race healthy and feeling terrific, is a victory unto itself.

And it’s one helluva thrill, too.

We knew had a 200+ mile drive back home last night and imagined it wouldn’t be all that bad.

We talked of the day for nearly four hours.

We glowed with pride at how well Stacy’s boy had run.

I stole more than a few glances at her when I drove us home.  When I did I felt so proud and happy for her and, admittedly, a little envious.  She sat there glowing.

She was so proud of how well her boy had run and happy as I have ever seen her.

There’s something special about this game from a myriad of different avenues.  Jocks, trainers, assistants, grooms, gamblers, all of ’em can tell you stories.

Today, the story is about an owner who gave her knucklehead boyfriend a new and better appreciation for the game and a new way to watch a race and understand the sport.

… and that is, arguably, one of the most thoughtful and sweetest gifts she has ever given me, and one in which I will be forever grateful for.