It is with great pride that I live vicariously through the beautiful brown eyes of my girlfriend Stacy.  I ride her coattails with pleasure and without shame. 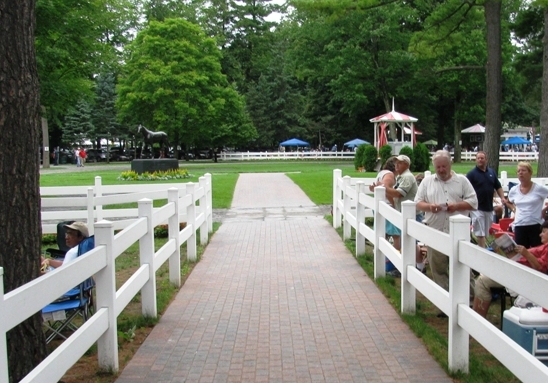 In doing so I get to realize the dreams of a childhood blessed with decades of Saratoga experiences and it isn’t even with my horse.

It first happened on July 25th and I had the time of my life.  I had experienced something unlike anything I have ever known before.

I get to do it again on Sunday, and I still can’t believe this life I get to live.

Runaway Jim will run between eight foes out of the five-hole when they spring the latch for Sunday’s third at Saratoga.

The Tim Hills charge will be making his fourth attempt at breaking his maiden against NY-breds and for the fourth time. 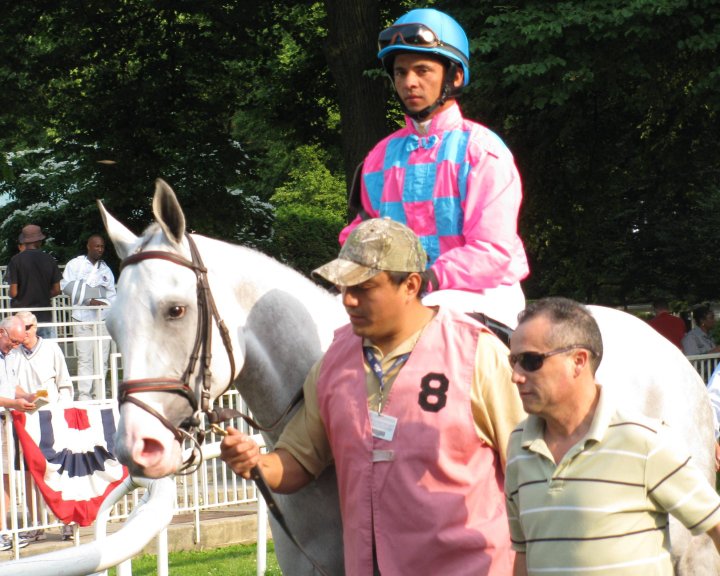 Jim has raced fourth, sixth and third in three starts.  His first two on grass, he didn’t take to the footing.  His third place finish came here, on dirt, going five-and-a-half furlongs.

Sunday is a new day.  He goes six panels and I’m just as nervous – and excited.

And he isn’t even my horse.  Did I mention that already?  Sigh.

It is in times like these I do what any self respecting (read: desperate) racing fan would do … turn to prayer.

Please don’t let me throw up in the paddock.

And please don’t let me pass out.

Please don’t let me throw up or pass out.  That’s all I’m askin’.

A clean break would be good.  You know, if it’s not too much trouble.  Maybe … I don’t know … maybe he can finish really well and come back sound?

Oh, and …  umm … if you can see it somewhere in your Sacred Heart to allow Jim to win by the length of the stretch Sunday afternoon, hey … it’s all good.  No worries there, mate.

So, just to recap, please don’t let me fall ill or drop unconscious while entering or standing in the Saratoga Race Course paddock.  Please let Jim break clean, finish well, come back sound, and with a decisive victory under his girth.  For this I pray and all I’m askin’.

Note:  Any winnings I may make on the race I publicly promise to tithe.

Amen.
p.s. it’s ok if I wrap the vegetables in bacon, right?  Everything’s better with bacon.

Last time Jim ran here it was all I could do to stand straight.  To maintain my composure.  To keep my wits. And yes, to not prematurely rid myself of breakfast. 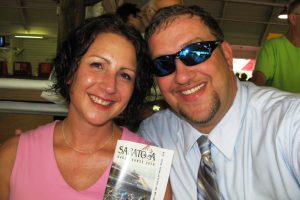 Were it not for the well timed hand in the crux of my elbow, and the soft reassuring words of an amazing woman, I can’t say I would have made it through.

If you read my post on him in late July you’d be aware of my declaration of “I am a wuss” when it comes to racing at The Spa.

To stand in the paddock for Jim’s race?

Maybe I oughta make sure Stacy eats HER vegetables … just so the poor woman can hold me up.

You know how to make a small fortune in horse racing?

You start with a large one!

However, the increasing popularity of horse partnerships proves it doesn’t have to be that way anymore.

West Point Thoroughbreds is a great example.  Perhaps the most notable of Thoroughbred Ownership Partners, they recently celebrated a Grade I victory in the Hollywood Gold Cup with Awesome Gem.

I’d bet they would be the first to tell you winning a race, at any level, can bring an unparalleled joy to an owner.  Especially if they’re new to the sport, and horse ownership.

Well, that is the heart of Seabrook Stable too.  Great people who love the game and want the thrill of seeing their horse run.

They’re a small group of family and friends who each have a percentage of the horse.  Some have 10%, some less, some more.  But when Jim makes it to the track, you’d think each of them have a 100% interest … because in a matter of speaking, they do.

For each of them, when the field heads to the gate, there is a generously prescribed amount of anxiety and excitement.  There’s a dose of fear that rushes through their veins, too.

“I just don’t want him to get hurt,” my Stacy says.

Runaway Jim was named by her brother Ken (pictured above, second from the right) after the song by Phish.  As big a fan this group has ever known, Ken has followed these guys on tour like the ambulance follows horses during a race … one is seemingly ever without the other.

I suppose for the sake of the family it’s a good thing he isn’t a diehard country fan.  Jim might have been named “She Got the Ring and I Got the Finger” or “I Still Miss You Baby, but my Aim is Gettin’ Better.”

I reckon The Jockey Club may not have let those pass.

But Ken did well.  Runaway Jim is a great name for a racehorse and to this family Jim is family.  Stacy and Ken’s mum and dad own the dam, an unraced mare named Miniconjon.

While visiting them at their home, she and I would ride our bikes to feed Minnie carrots every day.  We would regale her with stories of her son’s progress.

We like to think she listened and was proud of her boy.  That she stopped chewing her carrots for just a moment and reflected on what her baby has done, and what he hopes to do.

Alas, that was not the case.

As it so happened, when we ran outta carrots, she ran outta interest.

Such is a day in the life of a muddah.

In the meantime, we all remain steadfast in our hope to one day amuse her with stories of Jim’s accomplishments, whatever they may be.

What we hope for most of all is to tell her how healthy her son has been throughout his racing career.  That he’s fit, strong and most importantly, sound.   That he eats every meal and cleans out his feed bucket.

After all, what matters more than his well being?

That said, how cool would it be for him to win?

Preferably without me screaming at my shoes in the paddock  …  or passing out.