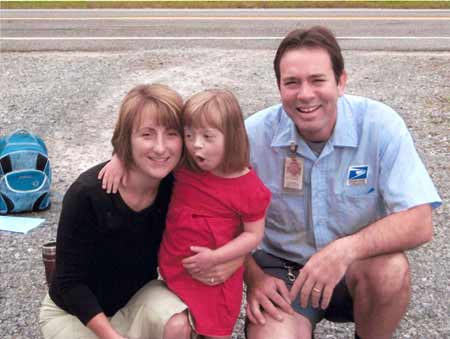 Local mail carrier, Sean Abernathy, and his wife, Jeanne, were in a horrible car accident on February 9th 2010. They are both in being treated for numerous injuries in ICU at Albany Med. They have a 6-year-old daughter, Erin, who has Down Syndrome and attends Joseph Henry Elementary School in Galway.

A fundraiser for Sean and Jeanne Abernathy will be held on March 21st to help support their family in this tough time. The fundraiser will be held at "13" Nightclub on Caroline St. in downtown Saratoga from 4-8pm. There will be a cover at the door, food, live entertainment, raffles and a silent auction to help offset numerous expenses.

Sean works as a city mail carrier in Saratoga and Jeanne is a graphic arts production specialist.

Sean and Jeanne both have a long and trying road ahead of them as they recoup from their injuries. Please attend and show your support. If you cannot attend, but would like to make a donation, you can send it to:

The Fund for Sean and Jeanne Abernathy c/o Ken Abernathy
at any Ballston Spa National Bank.

Some Ballston Spa National Banks are located at: