The Audiostars... 'Hotter' Than The Burners? 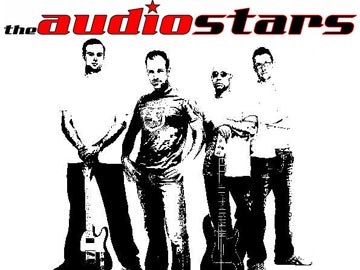 BALLSTON SPA NY - Performing since the summer of 2007, the Audiostars are quickly becoming the region's new favorite band -- possibly more popular than The Burners UK band was before going on hiatus after their 2006 New Years Eve show. In fact, two of the former Burners band members are in the Audiostars!

As many know, the energetic J Yager is admired for his great vocals... and also his tendency to get a little wild and wacky during his performances. His incredible talent and passion for music is what draws and excites fans of all ages. Yager was a founding member of The Burners UK and performed with several other local groups, including the Refrigerators, Runway 17, The Groove Assassins, Sidewinder, Cicada and Executioner.

Matt "Lanky" Pirog, former lead guitarist for The Burners UK, brings his talent to the Audiostars in addition to performing local gigs with Garland Nelson & Soul Session. His talent on the strings brings audiences to their feet at shows all over the Capital Region. His musical background includes production and performances with numerous artists, including the Erftones and Caged Monkey.

The talented Bobbie Van Detta on the bass guitar also contributes vocals to the Audiostars. Van Detta has performed with nationally acclaimed musicians and band members for Bon Jovi, Bob Dylan, Eric Clapton and others. Fans may also recognize him from regional bands The Newports, Professor Louie & The Crowmatix, City Rhythm, or Doc Scanlon's Rhythm Boys.

Audiostars drummer Chad Ploss is a seasoned musician as well. His incredible talent stems from years of practice and performance with regional and national acts, including the Refrigerators, Mario Sevayega, the Erftones, Scotty Mac & The Rockin' Bonnevilles, Tollbooth and Raisinhead.

These talented band members make up the hot local music group that keeps getting hotter -- the Audiostars. Catch them at many different venues throughout the summer, including Parting Glass, McGeary's, Horseshoe Inn Bar and Grill, Siro's, Shepard's Park and more.

Check out the local concerts calendar or visit the Audiostars website to stay updated.