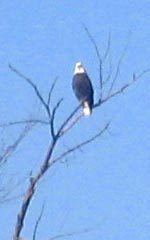 While fishing in their usual spot on Saratoga Lake, the Watson family spotted a bald eagle atop a tall tree.

"We had seen eagles in the area before," said Veronica Watson, "but this was especially exciting because we saw it on the lake that we fish on everyday."

The Watsons were fishing in Manning Cove on Saratoga Lake when they spotted the bald eagle, which they affectionately named "Billy The Eagle." Veronica managed to snap two photos of the eagle before it flew from the area. 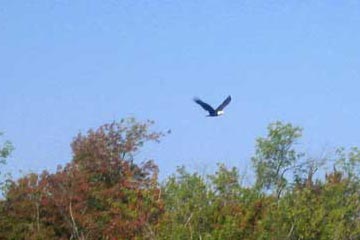 Excited to share her exciting bald eagle sighting with the Saratoga community, she forwarded her photos to us. Enjoy!

UPDATE: Dan Barb Brooks of Ballston Spa also spotted the eagle at about 5:30 PM on October 13, 2008 perched in the very back end of Manning Cove.

Read about a Past Bald Eagle Sighting »