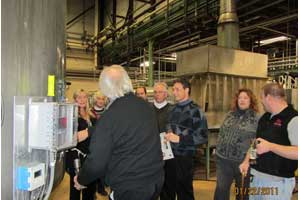 SARATOGA SPRINGS NY -Are you are looking for a quiet getaway for you and that special someone? Saratoga Arms has partnered up with the Shmaltz Brewing Company to offer you the weekend of a lifetime -- full of luxury, amazing food and beer!

This is not your average bed and breakfast! The luxurious guest rooms reflect the style and charm of the late 19th Century beginnings while still offering coveted 21st Century comforts such as whirlpool tubs, rooms with a fireplace, garden level walk outs with private entrances and of course free wireless and high speed internet access.

This downtown Saratoga B&B is offering a series of beer weekends called Something's Brewing-An Ultimate Bed and Brew Winter Weekend, on select weekends in March and April 2014. These weekends will include unprecedented access to The Shmaltz Brewery and the brewing process in addition to many other great events, including a delicious four-course beer pairing dinner.

Please note: Minimum attendance required for scheduled event weekends. If minimum is not met, event weekend will be cancelled.

Considering the first-class treatment and accommodations you will receive staying at the Saratoga Arms, the once-in-a-lifetime opportunity to go behind the scenes of a world-class Saratoga brewery and the sumptious four-course meal, this is a steal! Instead of paying for each of these separately, this Ultimate Bed and Brew Winter Weekend brings them to you at an affordable price. Make your reservations today!

Rooms with fireplaces and whirlpools also available for an additional fee.