The Boston Globe's Take On The Historic Saratoga Race Course 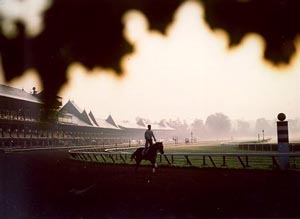 Saratoga Springs NY - The Boston Globe describes the races at Saratoga as Grand, Annual, Elegantly Equine. If you visit Saratoga Race Course you will see the same sights visitors did over 100 years ago. It is the oldest sporting venue in the country and is therefore intertwined with history and the days of old.

Sports columnist, Red Smith wrote: "From New York City you drive north for about 175 miles, turn left on Union Avenue and go back 100 years." Saratoga is unchanged. Visitors come from all over to be a part of an American past-time. The Victorian era houses that line the road, the striped awnings, the attendants in straw hats and red vests, and the bell that sounds before post time have all been maintained for 142 years.

The Boston Globe describes the track as "a lawn party, with gentlemen and ladies strolling the grounds in their summer finery. But it's also a country fair, with families bringing umbrellas and coolers for picnics on the backyard lawns beneath the elm trees. Everything about the place is romantically retro."

People love what Saratoga has to offer. The excitement of the big race days, including the Whitney and Travers, and the nightlife in downtown Saratoga Springs keeps people coming back year after year.

But what the Boston Globe attributes to making the track extremely special is "its intimacy and accessibility." Any person "can claim a picnic table by plunking down their belongings, walk across the street to take in morning workouts with the railbirds at the Oklahoma track, wander around the stables where top trainers like Bob Baffert, D. Wayne Lukas, Nick Zito, and Steve Asmussen hang out, then head back for breakfast."

What makes Saratoga and the race track truely special is the is the way it brings all types of people together to experience the history of the track and excitment of a day at the races.