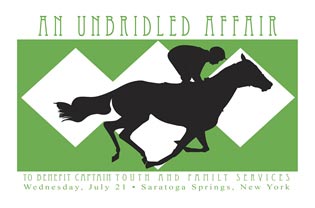 SARATOGA SPRINGS NY - CAPTAIN Youth and Family Services will hold a true Saratoga Couty gala this summer to raise money for the volunteer-driven organization which reaches out to troubled children and their families in hard times.

The 2nd annual gala, titled "An Unbridled Affair" will be chaired by NY State leading trainers, Linda Rice, Gary Contessa and his wife Jennifer. The gala will be held at the National Museum of Racing in Saratoga Springs, on July 21st, just 2 nights before the opening day of the Saratoga Race Track.

An Unbridled Affair will be catered by Hattie's Restaurant, and will feature Saratoga County vendors exclusively as an effort to support local businesses. Get ready to dance, as there will be music by local band, Soul Session. D. Wayne Lukas leaves his horse training job behind to become auctioneer for the night. Some of the auction items include:

...and many more all to raise money for CAPTAIN.

An Unbridled Affair will be held on July 21, 2010 at the National Museum of Racing in Saratoga Springs. A Winning Color VIP Reception will be held at 6pm, where as the Gala itself starts at 7pm. The pre-gala VIP Reception is $125 per person (includes Gala admission) and includes meet and greet with many famed trainers such as Gary Contessa, Linda Rice and D. Wayne Lukas, and other racing celebrities, also an open bar and dinner starting at 6pm. The Gala is $100 per person otherwise, and $75 for age 35 and under. Tickets can be purchased online by July 12th at the CAPTAIN website.

CAPTAIN is a local organization and stands for Community Action for Parents, Teens and Interested Neighbors. The organization was started by concerned parents in 1977 after two teen suicides occured in Clifton Park. The parents wanted to take action immediately and started an organization that troubled kids could turn to. CAPTAIN addresses issues such as youth homelessness, domestic violence, academic failures, poverty, and underage drinking or drug use.

CAPTAIN is important to the racing industry in Saratoga because of the aid that they give to many of the backstretch workers and their families at the Oklahoma Track. CAPTAIN helps support the workers in the way that they support many children in the community with living assistance.

Contessa spoke at CAPTAIN's office in Clifton Park, saying why organizations such as CAPTAIN mean a lot to him, and why he is chairing the gala:

"I grew up on the fence. I could have either gone to jail, or become a horse trainer. But someone reached out to me and said 'keep up like this and you're never going to be anything.' The community needs CAPTAIN to reach out to kids in the same way. There's nothing better," Contessa said. He continued, "we need to reach out to youth because they are the leaders of tomorrow."

Last year, 250 attended the gala and CAPTAIN raised $35,000. This year, they are hoping to max out capacity at 400 people and double the amount raised. Bill Casey, the acting Executive Director of CAPTAIN, spoke of the importance the gala has of raising money, but more importantly of raising awareness in the community.