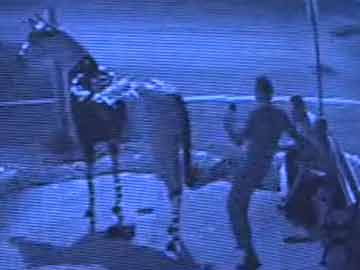 Two young men and a young woman took turns kicking and roughing up “TR The Realtor” (as the horse is called) outside the Roohan Realty office at about 12:30 am on Tuesday. The surveillance camera shows them kicking and striking the horse repeatedly, pausing to sit on a nearby bench each time traffic passed by.

After working at it for at least 20 minutes, one of the young men was able to break and twist off the horse’s back legs. The woman put one of the legs in her purse, and the group went on its way.

TR is one of about 30 decorated fiberglass horses throughout the Spa City. The recent incident is the third attack on this piece of art within the past three months. Previously, the horse suffered lesser physical damages and was repaired with a strong epoxy and support rods in some of the legs.

Tom Roohan, president and owner of Roohan Realty, expressed his dismay at the recent vandalism, calling the perpetrators cowards. He had hoped to dissuade any further attacks by installing the security camera after the second incident, but only about a week later, this third attack occurred.

There have been no arrests yet. Saratoga Springs Police are asking anyone who recognizes the vandals on the video tape or has any other helpful information to come forward.

Roohan plans to have TR repaired and to install lights around the horse, making it more visible after dark.

To stay up to date on all the latest news, subscribe to our Saratoga Springs news feed!