Another Group Of Horse Vandals In Saratoga Springs Caught On Video 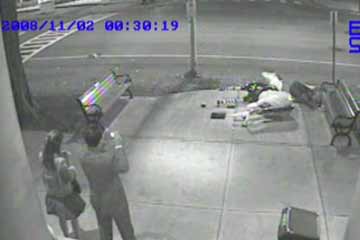 SARATOGA SPRINGS NY - Not even three months since the last attack on "TR The Realtor" this fiberglass horse suffered another major injury on November 2, 2008 after a group of young vandals had their go at it. A video surveillance camera captured the scene, showing three (presumably drunk) young adults repeatedly attempting to mount the horse (with no success).

After several attempts to jump on the horse's back, one of the males got a running start and tried to mount the horse for what would be the last time that night. "TR The Realtor" (as the horse is called) went crashing to the ground, taking his attempted rider with him. Panicking, the vandals quickly gathered their belongings and moved along.

Local police have yet to find the vandals responsible. They are hoping that Roohan Realty's video surveillance tape, which has been released to the media, will provide some valuable leads.

This has been the fourth vandalism in the past six months on this particular fiberglass horse in Saratoga Springs. Other vandalisms and similar equine-related crimes had also plagued the Spa City this past summer.

While everyone agrees this is a tragic story, our friends over at All Over Albany -- rather than crying over spilt milk -- have decided to have fun with the topic instead. At the request of one of their readers, staff member Sebastien sped the highlight tape up and set it to the Benny Hill theme. See the resulting video below, which lightens the vandalism mood a little.

What makes the video especially laughable is the seemingly overexaggerated drunkenness of the vandals. Apparently All Over Albany readers weren't the only ones to find humor in the incident. Keith Olbermann featured the original video on his Oddball segment of Countdown With Keith Olbermann.