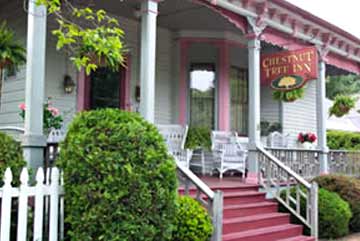 SARATOGA SPRINGS NY - Police are investigating the theft of a bronze jockey statue, which was taken from the porch of the Chestnut Tree Inn on Whitney Place in Saratoga Springs in the overnight hours of Saturday, August 9, 2008.

The statue was one of two identical jockeys cast in bronze, standing on the Chestnut Tree Inn porch since last year. Bruce DeLuke, owner of the inn, had the two statues created in Thailand from a smaller model lawn statue. DeLuke noticed the jockey missing around noon on Sunday, reporting it to police shortly after.

DeLuke speculates the perpetrator will likely try to sell the statue or keep as a lawn ornament. Whether for scrap metal or artistic value, the statue would be worth a hefty sum, standing 42 inches tall and weighing in at 150 pounds. DeLuke estimates the horse's value to be about $2,000.

Equine statue crimes seem to be a rising trend lately. Prior to this incident, a 12-foot bronze horse and jockey statue was stolen from Garden State Park Racetrack (NJ) in mid July, a piece valued at over $500,000. And in early August, a fiberglass horse statue was vandalized outside Roohan Realty's office here in Saratoga Springs, preceded by two lesser vandalism attempts to the same horse.