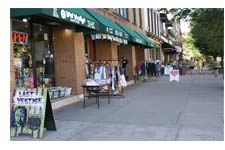 Saratoga Springs NY -Are you one of those people that just loves to help other people? Or someone who knows everything there is to know about Saratoga? Do you like wearing buttons?

The Saratoga County Chamber of Commerce has just the pin for you - a small, green and white button that proclaims "Ask Me - I'm A Local."

The idea behind the button is that tourists and visitors to Saratoga Springs will feel much more welcomed and comfortable if they know they can ask locals for directions and recommendations, whether it's how to get to the Race Track, where they can eat outdoors, or what they can find downtown.

If you think you would like to pick up a pin, they are available at the office of The Saratoga County Chamber of Commerce, at the info booth in front of Congress Park, and at ten local bank branches: 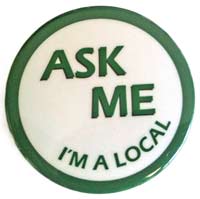 It's a new idea, but the chamber is willing to give out its 2500 pins for free to anyone who wants to wear them. If it catches on and demand increases, so will the buttons.

So show off your button, and when people ask, let them know that the locals of Saratoga Springs, NY are welcoming, friendly, and very "Ask Me"-Ready!