Mine Nightclub Opening in Saratoga 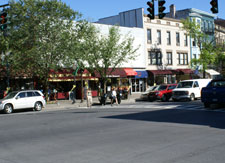 Saratoga Springs NY - Mine, a new night club located at 388 Broadway in downtown Saratoga Springs opened Memorial Day weekend 2010. The new club is located where the Newbury, Club 388, and Grotto have been in the past.

Catherine Harris, and her husband, Mark Smith, who opened Mine, intend to keep the club with the same theme it has had in the past. The previous owners created the space to look like an underground cave, and that is how it will stay.

It will have a high-energy, modern dance-club atmosphere that the owners would like fit for all ages. Harris is planning on hiring DJs to play top hits, have frequent drink specials, giveaways and celebrity nights. There is a "dress to impress" dress-code consisting of no hats, no sunglasses or undershirts worn alone.

The bar space was bought in memory of Harris' daughter, Lorraine LaFountain, who passed away in a car crash in 2005.

Mine will be open on weekends until the start of the Saratoga Race Track season on July 23rd, when it will be open 6 days a week, closed on Tuesdays.

Check the Saratoga Events Calendar for Mine nightclub events as well as other nightlife events happening in Saratoga every weekend.